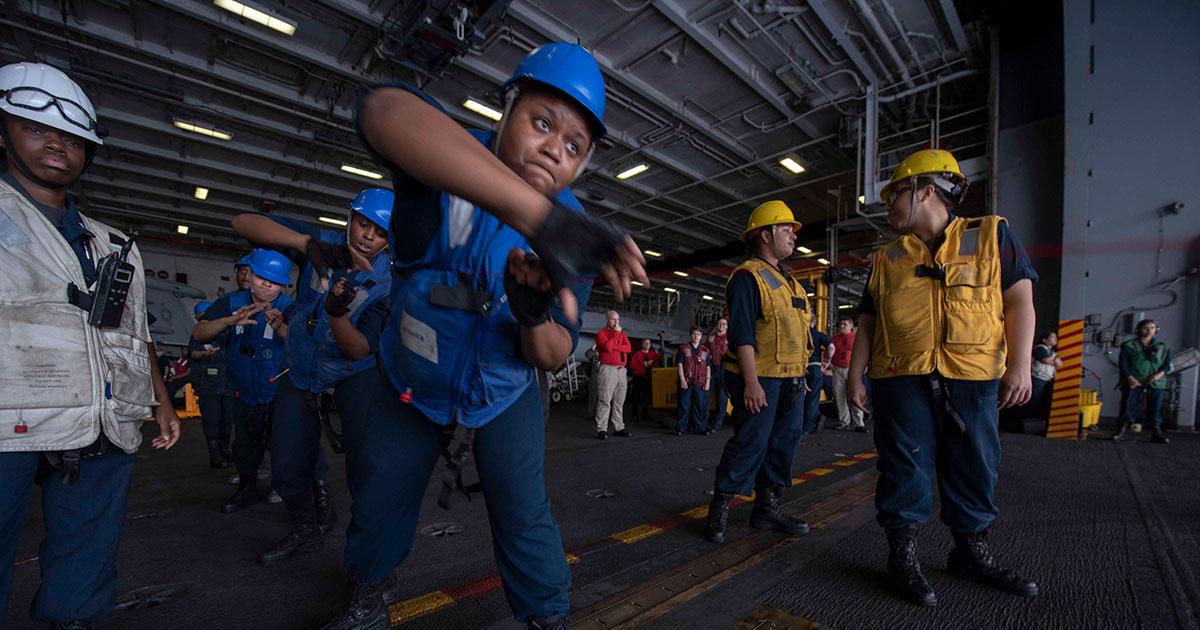 The all-women team is the first in Ronald Reagan’s history.

“We have all the pieces in place to make this happen, so why not?” said the Eagle, Idaho, native. “I've got a lot of talented female Sailors--some that have been here for four or more years and others that have been here for only a few months. I don’t really think Sailors or people think of this as a big deal, but it really is.”

In order to appreciate the present, Sailors must look at the past and the immense progression Navy women have made.

“I think a lot of us Sailors take our current jobs and work environment for granted,” said Ross. “Look how far we have come as an organization. The year 1995 was when women were first allowed on ships. It was nothing like it is now. It was just a few ships where women could work or maybe there was only a few women on the ship. Now my department is 30 to 40 percent female.”

Mathematically, there shouldn’t be enough female Sailors in Reagan’s Deck Department to be able to man a full aircraft carrier’s rigging team. Female Sailors make up 20 percent of the Navy according to U.S. Navy demographic data from Jan. 1 this year.

“This is the most females we have ever had and I’ve been here since August of 2015,” said Boatswain’s Mate 2nd Class Daishea Boland, from St. Thomas, U.S. Virgin Islands. “To be able to man this team with such strong women was not easy and it’s an extremely special opportunity to be a part of this.”

The positions of the team include: the UNREP safety officer, who oversees the station’s safety throughout the evolution; the rig captain, responsible for all personnel working on station and the successful completion of the evolution; the riggers who hook-up the mechanism that sends the cargo back and forth; the signalman, who uses two signal paddles to send and receive messages; the sliding padeye and gypsy winch operators, who operate essential equipment that sends the rig back and forth and lowers cargo to the deck; phone talkers, who use sound-powered headsets to communicate; and line handlers, who haul on the line to assemble the rig.

Boatswain’s mates are typically viewed as tough, gritty, masculine workers among the deck plates. A female boatswain’s mate obviously contradicts many of those stereotypes.

“Females in Deck Department — we’re used to being singled out and being different,” said Boatswain Mate 2nd Class Claire Schwalbach, from Versailles, Kentucky.

“It’s no surprise to me how we banded together and were able to do this successfully on our own regardless of the obstacles before us.” This particular evolution was special to the Sailors involved and another opportunity to break down stereotypes of females not being able to work as effectively as their male counterparts.

“I wanted to show everyone, ‘look what Reagan is doing,’” said Ross. “‘Look what Deck is doing.’ We are giving females the spotlight to show the Navy and whoever else that this rig team is just as good and just as capable as anyone else’s team out there.”

At approximately 0930, the 21 Sailors safely rigged the station and sent the first load of cargo to the Walter S. Diehl. Following the first round of cargo, the team quickly eased into a rhythmic operation. After a three-hour evolution, the all-female crew successfully sent and recovered 100 pallets of food, mail and retrograde material.

Few vessels have given their Sailors the chance for these advanced qualifications and trained them to take the mantel Ross said. “This is not male versus female. They are not special. Everyone can do everything in this department, but you do have to give everyone a chance, regardless of sex, race, or religious orientation. None of that stuff matters. What matters is doing our job and doing it right.”

Ronald Reagan, the flagship of Carrier Strike Group 5, provides a combat-ready force that protects and defends the collective maritime interests of its allies and partners in the Indo-Pacific region.