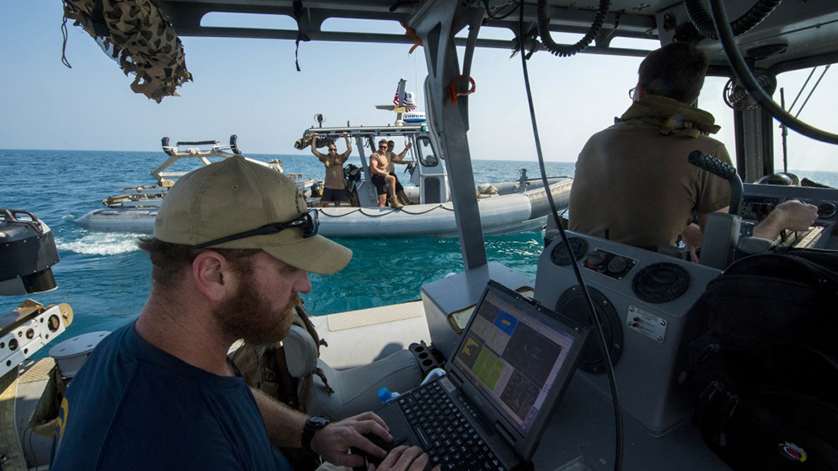 U.K.-U.S. Mine Countermeasures (MCM) Exercise 17-1 concluded in the Arabian Gulf, Nov. 17. The 38-day, bilateral exercise between the U.S. Navy and U.K. Royal navy was designed to provide an opportunity for both nations to share knowledge of MCM techniques.

Evolutions were tailored to focus on the cooperative skills of both countries in working together to identify and eliminate mine threats that threaten regional security and the free flow of commerce.

"U.S. and U.K. MCM forces work together on a daily basis, as well as continuously engaging in bilateral exercises and professional exchanges to ensure that we are able to efficiently deter and counter naval mine threats," said Capt. Eric Wirstrom, commander, Task Force (CTF) 52. "This exercise provided a valuable opportunity for both nations to optimize force interoperability and increase warfighting effectiveness."

According to the Gladiator crew, the highlight of U.K.-U.S. Mine Countermeasures Exercise 17-1 was the opportunity to practice using a combat SeaFox round -- a remotely-operated, unmanned underwater vehicle used to investigate and identify mine contacts on the ocean floor. When a mine is found, a combat round is deployed, detonating a charge next to the mine in order to eliminate the mine threat.

"Deploying and detonating the SeaFox combat round was a unique experience," said Petty Officer 2nd Class Kortni Jonker, one of Gladiator's SeaFox pilots. "It required a focused, coordinated effort between everyone standing watch on deck and in combat information center, because the engagement work-up and execution was different than the usual investigatory SeaFox round. It was great to put our training to practice."

As part of improving proficiency in mine warfare through force integration among coalition assets, Lyme Bay acted as a command and control station and auxiliary support ship for the exercise.

"Lyme Bay acted as an afloat forward support base for the task group as it holds enough provisions, equipment, and fuel to sustain the task group for the duration of the exercise," said Royal navy Cmdr. David Morgan, commander of RFA Lyme Bay and head of the coalition task group for the exercise. "It also acted as a launch platform for U.S. Mine Hunting Unit (MHU) and Expeditionary Mine Countermeasure Company (EXMCM) sea boats to conduct their tasks, as well as a landing site for HM (Helicopter Mine Countermeasures Squadron) 15 helicopters; allowing us to refine various MCM capabilities."

Teams, such as the EXMCM, work to increase the effectiveness of MCM by employing innovative technology to better pinpoint possible mines.

"EXMCM teams offer the future of mine detect-to-engage capabilities," said EXMCM EOD Platoon Commander Lt. j.g. Patrick Monday. "They provide a minimal footprint, are deployable anywhere, and the past few weeks gave us an excellent opportunity to prove this."

The EXMCM members used multiple UUV systems to search for training mines within a simulated mine threat area. These small, compact vehicles have the ability to travel into hazardous areas autonomously, allowing the EXMCM units to accurately search and detect possible mines in a large area quickly without risking lives.

"Our vehicles allow us to take the Sailor out of harm's way while giving us the entire capability of a minesweeper, but the operational footprint of a pair of divers," said Petty Officer 1st Class Jeremy Pino, assigned to EXMCM. "They're great because they're very portable and quick to deploy. The ability to program our vehicles and send them on task, while monitoring over the horizon, is a game-changer for MCM operations."

Autonomous vehicles were used and tested during the exercise by the MHU as well. The team tested the common unmanned surface vehicle (CUSV) -- a retrofitted, 11-meter rigid hull inflatable boat which tows a sonar system identical to those used on mine countermeasure helicopter MH-53 Sea Dragons -- behind itself in order to hunt for mines.

According to Monday, coordination between the various units involved in the bilateral exercise is one challenge which prepared Sailors for future interactions.

"It's never easy to begin with," said Monday. "By working out the kinks in these exercises, we've better prepared ourselves for a real-world response."

The exercise successfully demonstrated the capabilities of both U.S. and U.K. naval forces to maintain safe shipping lanes and ensure the free flow of commerce in the U.S. 5th Fleet area of operations.

"The international community has a critical shared interest in the free flow of commerce," said Wirstrom. "Integration of American, British, Australian, French, and regional partner MCM forces in this area of operations is vital to maintaining stability and security in the maritime domain."

"Together the integrated team of U.K. and U.S. personnel are always ready to respond any mine threat in the [Arabian] Gulf," said Morgan.

CTF 52 and U.K. MCM Force looks forward to applying the lessons learned to the next iteration of the U.S.-U.K. Mine Countermeasures Exercise.