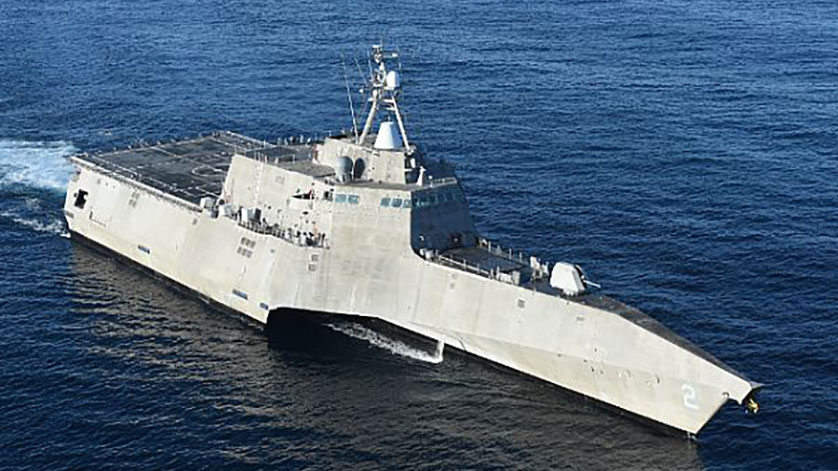 Moran told the audience Tulsa will be a workhorse of the fleet, able to reach over 1,000 ports around the 50,000 islands in the South China Sea.

"Ships like Tulsa will operate where much of our Navy simply cannot, in the shallows and in the littorals, with speed, agility, and lethality," Moran said.

Many in attendance traveled from the city of Tulsa to witness the ceremony of the second U.S. Navy ship to bear the city's name.

"While I never served in the military, I have made it very much part of my mission to be in service to the men and women who protect this country," said Hon. Kathy Taylor, former mayor of Tulsa and ship's sponsor. "I am grateful for the opportunity and the honor to serve as the sponsor of USS Tulsa and look forward to this lifelong bond I will share with her crew."

Moran recognized the unique connection between the city of Tulsa, the Navy and the ship bearing its name.

"Today we are in fact the smallest Navy fleet we've had in 99 years and our Nation and our Navy are being challenged. I cannot think of a more appropriate name for this ship. Not only will USS Tulsa bring the ship count up just a notch, she will bring the character of the citizens of her namesake, a grit and determination of a frontier town that knows how to bear down during difficult times."

When commissioned, Tulsa will be homeported in San Diego.

Austal Shipbuilding in Mobile, laid the keel in Jan. 2016 and plans to deliver the ship in 2018.