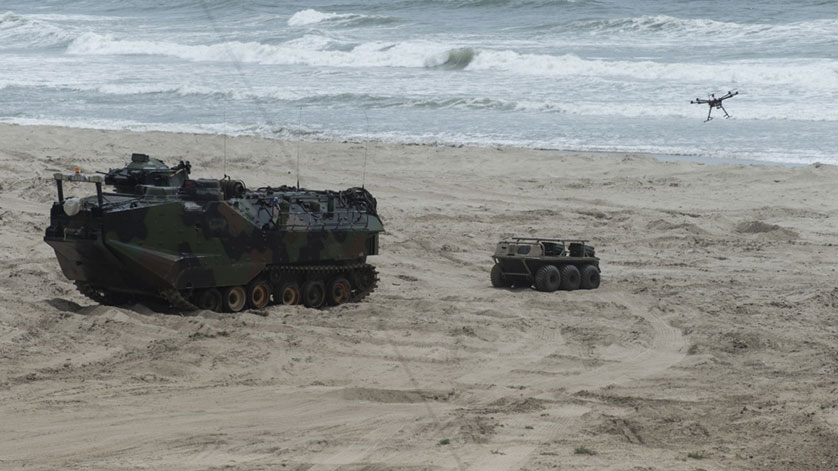 Augmented reality systems and advanced wireless networks were among the technologies shown during the Ship-to-Shore Maneuver Exploration and Experimentation Advanced Naval Technology Exercise (S2ME2 ANTX) 2017-a set of amphibious exercises May 4 at Marine Corps Base Camp Pendleton in California.

S2ME2 ANTX brought together industry, academia and the Naval Research and Development Establishment-which includes the Office of Naval Research (ONR) and various research laboratories associated with the Department of the Navy-to demonstrate emerging technology innovations. The exercise involved hundreds of Sailors, Marines and Department of Defense civilian employees and contractors.

By using direct feedback and technical evaluations from participating warfighters and senior leadership in attendance, S2ME2 ANTX also may change the way the U.S. Navy and Marine Corps look at prototyping and rapidly acquiring technology.

"The large scope of this exercise allows the Navy and Marine Corps to make informed decisions about future generations of technology for use by the warfighter," said Dr. David E. Walker, ONR's director of technology. "This pairing of Sailors and Marines with scientists and technologists will help move innovation at a faster pace."

During each amphibious beach demonstration, unmanned surface and underwater vehicles approached the shore first, collecting intelligence about battlespace conditions-including threats and obstacles-providing an accurate picture of what warfighters would face when leaving their vessels and vehicles.

Several ONR- and Naval Research Laboratory-sponsored systems were demonstrated at S2ME2 ANTX, including:

Technologies that performed well at S2ME2 ANTX potentially could be featured at Bold Alligator 2017, a multinational series of amphibious exercises led by U.S. Fleet Forces Command and U.S. Marine Corps Forces Command, scheduled for the fall.

Significant New Advance in Autonomous AS