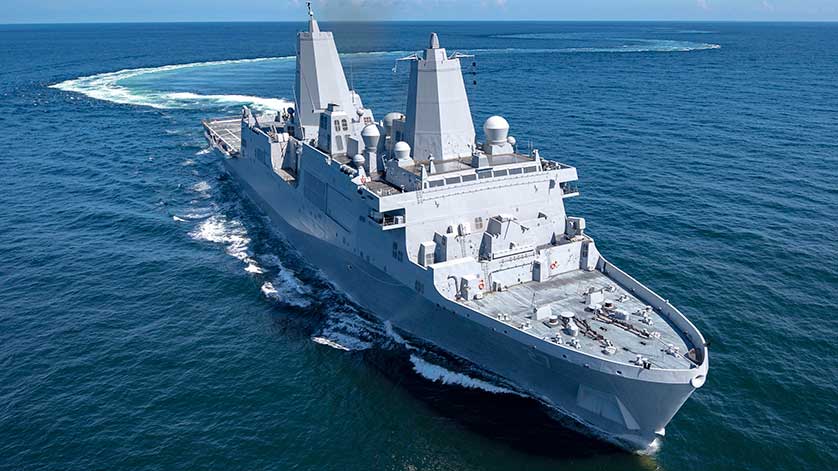 “These sea trials provide an opportunity to showcase the ship’s tremendous capabilities and the build and test skills of our shipbuilders,” Ingalls President Brian Cuccias said. “The success of these milestones is important as we continue to remain competitive and keep our supplier base and production lines active in theconstruction of these quality amphibious warships.

”Key demonstrations performed during acceptance trials for INSURV by the Ingalls’ test and trials team included: the anchor-handling demonstration, ballast/de-ballast demonstration, detect-to-engage exercise, running the ship at full power and steering. Now Ingalls’ shipbuilders will put their final touches on the ship in preparation for delivery this year.

“Our team puts in a lot of hard work and effort to make these sea trials successful,” said George Jones, Ingalls’ vice president of operations. “We get better with every LPD we build, and we look forward to delivering a very complex and capable ship to our sailors and Marines. As always, this success was a joint effort between our shipbuilders, test and trials team and our partners at Supervisor of Shipbuilding, Gulf Coast.”

Portland (LPD 27) is named for the largest city in the state of Oregon. The state has a long history with the Navy, going back to the construction of hundreds of World War II Liberty and Victory ships at three Portland-area shipyards.

Ingalls has delivered 11 San Antonio-class ships to the Navy, including John P. Murtha (LPD 26) in 2016. In June, Ingalls received an advance procurement contract from the U.S. Navy to provide long-lead-time material and advance construction activities for LPD 29, the 13th amphibious transport dock of the San Antonio class. Ingalls will lay the keel of the 12th San Antonio-class ship, Fort Lauderdale (LPD 28), this fall.

“Portland’s successful seatrial proves the dedication and quality of work our shipbuilders continue to provide to the LPD program,” said Steve Sloan, Ingalls’ LPD program manager. “I’m proud of the performance of the shipbuilders and the ship during acceptance trials, and now we will continue to work the final fit-and-finish touches before LPD 27’s delivery this fall.”

The San Antonio class is a major part of the Navy’s 21st century amphibious assault force. The 684-foot-long, 105-foot-wide ships are used to embark and land Marines, their equipment and supplies ashore via air cushion or conventional landing craft and amphibious assault vehicles, augmented by helicopters or vertical takeoff and landing aircraft such as the MV-22 Osprey. The ships support a Marine Air Ground Task Force across the spectrum of operations, conducting amphibious and expeditionary missions of sea control and power projection to humanitarian assistance and disaster relief missions throughout the first half of the 21st century.