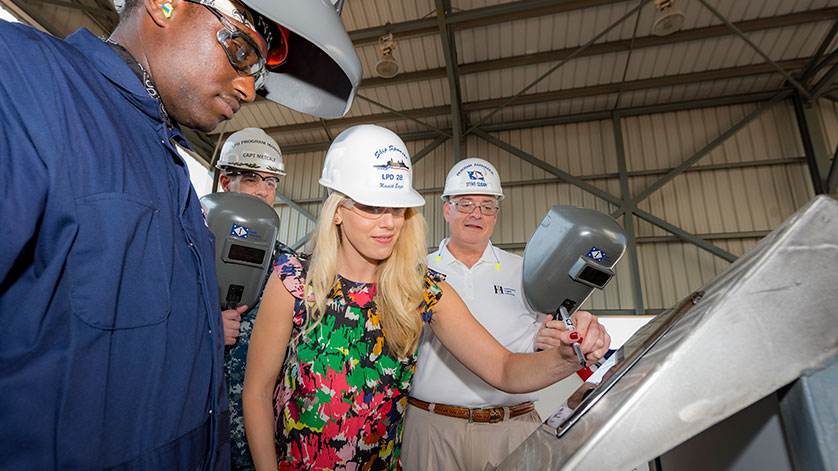 “The keel authentication is an important milestone in a ship’s life, as we lay the foundation upon which this great ship will be built,” said Steve Sloan, Ingalls’ LPD program manager. “LPD 28, like all ships in the class, is being built to the highest quality standards with outstanding cost and schedule performance. The LPD team is energized and motivated to make this ship the best yet. Fort Lauderdale will be strong and capable because our men and women in the Navy and Marine Corps deserve nothing less.”

LPD 28 is named Fort Lauderdale to honor the Florida city’s historic ties to the U.S. Navy, which date to the 1830s and include an important naval training center during World War II.

Meredith Berger, who served as deputy chief of staff under former Secretary of the Navy Ray Mabus, is the ship’s sponsor.

“For the future USS Fort Lauderdale, your hands will build her, your ingenuity will test her, your hard work and talent will give our Navy, Marine Corps and nation another much-needed ship in the fleet,” Berger said. “Today we join the first major modules of this great ship, the keel blocks. In the coming years we will see the skilled, indispensable workers of Ingalls as they begin to build this ship, connecting plank to plank, mast to deck, knowing the Navy and the Marine Corps will work hand-in-hand with them exploring, to the fullest, the design and capabilities of this incredible ship.”

Howard Sparks, a structural welder at Ingalls, welded Berger’s initials onto a steel plate, signifying the keel of LPD 28 to be “truly and fairly laid.” The plate will remain affixed to the ship throughout the ship’s lifetime.

“Picture this ship, your ship, joining the fleet and becoming a part of a dynamic national Navy presence across the globe,” said Capt. Brian Metcalf, the Navy’s LPD 17-class program manager. “The U.S. Navy remains the most dominant navy in the world because of the powerful combination of American sailors and Marines and the highly capable industry that provides quality ships.”

Ingalls has delivered 11 San Antonio-class ships to the Navy, including Portland (LPD 27) in mid-September. In June, Ingalls received an advance procurement contract from the Navy to provide long-lead-time material and advance construction activities for LPD 29.

The San Antonio class is the latest addition to the Navy’s 21st century amphibious assault force. The 684-foot-long, 105-foot-wide ships are used to embark and land Marines, their equipment and supplies ashore via air cushion or conventional landing craft and amphibious assault vehicles, augmented by helicopters or vertical takeoff and landing aircraft such as the MV-22 Osprey. The ships support a Marine Air Ground Task Force across the spectrum of operations, conducting amphibious and expeditionary missions of sea control and power projection to humanitarian assistance and disaster relief missions throughout the first half of the 21st century.