Future USS Sioux City to be Commissioned in Annapolis, Maryland 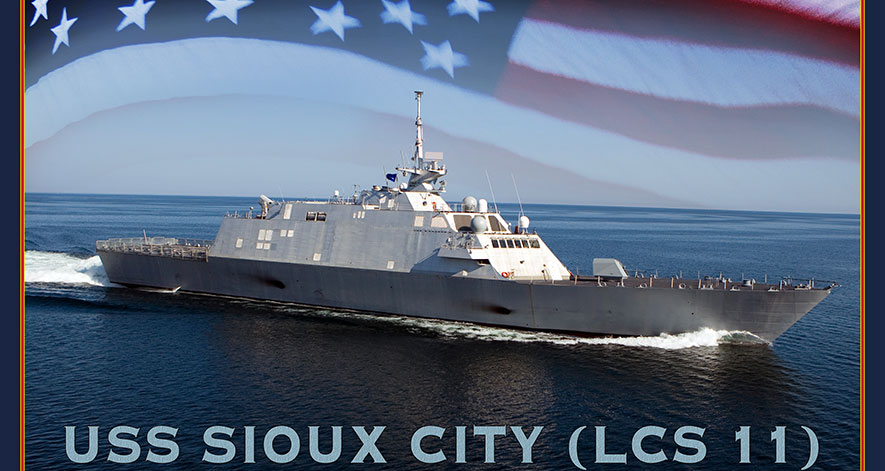 Secretary of the Navy Ray Mabus announced that the city of Annapolis, Maryland, will serve as the commissioning site for the future USS Sioux City (LCS 11).

Sioux City, a Freedom variant of the LCS class, was named to honor the patriotic, hard-working citizens of Sioux City and the state of Iowa for their support of, and contributions to, the military. Sioux City was termed an All-American City by the National Civic League because of the balance it struck between community and industry.

No date has been set for the ceremony, but the ship is expected to be commissioned later this year.

Mary Winnefeld, spouse of retired Adm. James "Sandy" Winnefeld, serves as the ship's sponsor. Sponsoring the Sioux City is a continuation of Winnefeld's commitment to public service. She has volunteered for multiple organizations, many of which support military families, including the Navy-Marine Corps Relief Society, the Tragedy Assistance Program for Survivors and the Cohen Veterans Network.

Littoral combat ships are fast, agile, focused-mission platforms designed for successful operations in near-shore and open-ocean environments. They are designed to defeat threats such as mines, quiet diesel submarines and fast surface craft.

Sioux City will be outfitted with reconfigurable payloads, called mission packages, which can be changed out quickly as combat needs demand. These mission packages are supported by special detachments that will deploy manned and unmanned vehicles and sensors in support of mine, undersea and surface warfare missions.

Marinette Marine in Marinette, Wis. built Sioux City, which is 378 feet in length, has a waterline beam of 57 feet, displaces approximately 3,000 tons, and will operate at speeds in excess of 40 knots.