Future USS Little Rock to be Commissioned in December 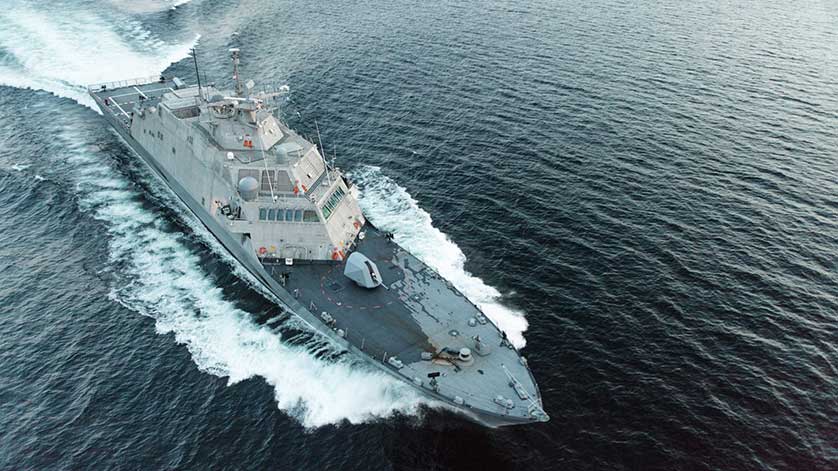 Secretary of the Navy Richard V. Spencer announced on October 18 that the newest Freedom-variant littoral combat ship, PCU Little Rock (LCS 9), will be commissioned during a ceremony on Saturday, December 16 at Canalside Buffalo.

The future LCS 9, commanded by Cmdr. Todd Peters, is the tenth littoral combat ship to enter the fleet and the fifth of the Freedom variant design. It is the second warship named for the Arkansas state capital and will be commissioned alongside its namesake ship, which serves as a museum at the Buffalo and Erie County Naval and Military Park.

In the summer of 2013, the keel of Little Rock was laid down. The ship was christened and launched on July 18, 2015 during a ceremony at Marinette Marine Corporation's shipyard in Marinette, Wisconsin.

The Littoral Combat Ship (LCS) is a class of Small Surface Combatants with specific capabilities focused to defeat global challenges in the near-show (littoral) environment. LCS is optimized for flexibility in the littorals with mission reconfigurable capability. Employing a System-of-Systems approach through a series of modular mission packages, unmanned vehicles and an innovative hull design, the LCS is designed to incrementally add combat capabilities through its reconfigurable mission packages. LCS is a cost effective solution to provide joint force access in the littorals, in an environment of evolving access-denial threats and proliferation of asymmetric weapons and strategies, particularly mines; small, fast, highly armed boats operating in groups; and diesel submarines operating in shallow water. LCS is designed to operate independently in low-to-medium threat environments, and to fight and operate in high-threat environments as part of a networked battle force which includes larger, multi-mission surface combatants.

After commissioning in Buffalo, she will make her way to homeport in Mayport, Florida.