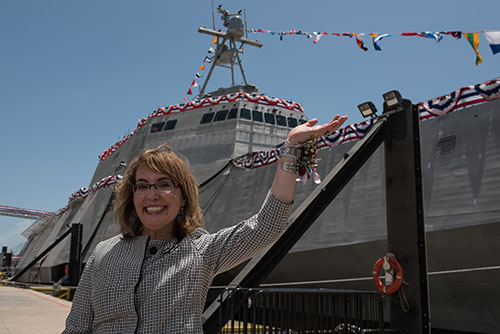 Future Independence-class littoral combat ship USS Gabrielle Giffords (LCS 10) successfully completed its acceptance trials Nov. 18. The trials consisted of a series of in-port and underway demonstrations for the Navy's Board of Inspection and Survey (INSURV).

Acceptance trials are the last significant milestone before delivery of the ship to the Navy. During the trials, the Navy conducted comprehensive tests of the LCS intended to demonstrate the performance of the propulsion plant, ship handling, and auxiliary systems.

"Another thorough trial by INSURV, and another ship with improved scores and at a lower cost than her predecessor," said LCS Program Manager Capt. Tom Anderson. "LCS 10 is an exceptional ship which brings the Navy operational flexibility at an affordable price."

While underway, the ship successfully performed launch and recovery operations of the 11-meter, rigid-hull inflatable boat; surface and air self-defense, detect-to-engage exercises; and demonstrations of the ship's maneuverability to include a full power run in excess of 40 knots.

Each LCS will be outfitted with a single mission package made up of mission modules containing warfighting systems and support equipment. A dedicated ship crew will combine with aviation assets to deploy manned and unmanned vehicles and sensors in support of mine countermeasures, anti-submarine warfare, or surface warfare missions.