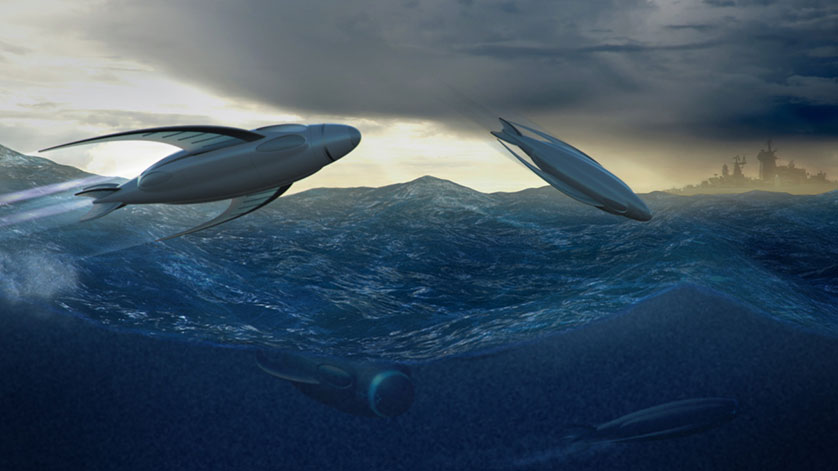 With defence dangers acute at the waterline, she designed an organic shaped concept with the nimble agility to both fly and swim - to avoid detection or pursue a quarry.

Joining a team of the UK's brightest and most talented young engineers and scientists Ali was tasked by the Royal Navy, along with the rest of the group, to imagine submarines of the future. 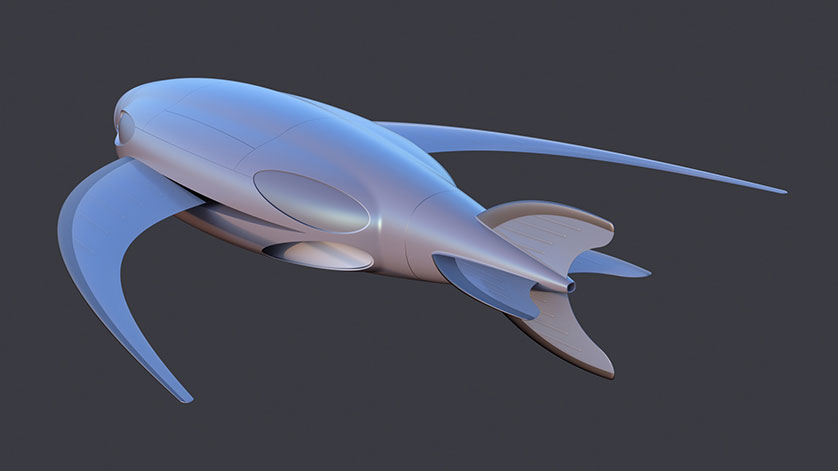 The young British scientists and engineers were gathered together under FutureNest, an offset of UKNEST, a not-for-profit forum that promotes the engineering, science and technology interests of UK Naval Defence.

Through an interactive partnership with the best minds in UK Industry and academia the Royal Navy aims to remain a leading global maritime force.

The futuristic submarine concepts, that emerged from the FutureNest group and unveiled by the Royal Navy, mimicked living marine lifeforms and radically changes the way underwater warfare could look in 50 years. 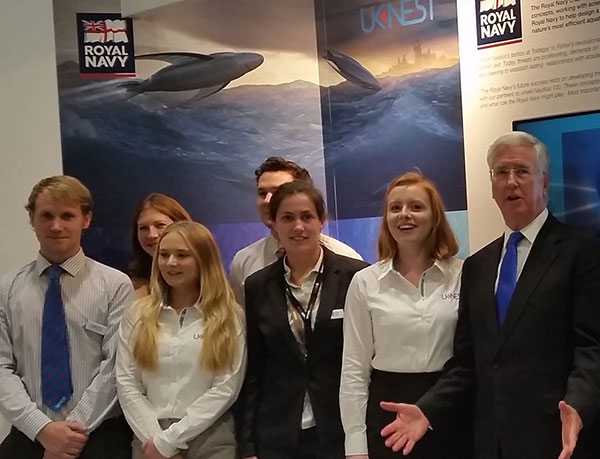 Secretary of State, Michael Fallon, and Ali Roy from Saab Seaeye (centre) along with some of the young scientists and engineers from FutureNest.

Along with Ali Roy’s flying concept, there was a crewed mothership shaped like a manta ray, unmanned eel-like vessels equipped with sensor pods which dissolve on demand to avoid enemy detection, and fish-shaped torpedoes sent to swarm against enemy targets.

Commander Peter Pipkin, the Royal Navy's Fleet Robotics Officer, said: "With more than 70 per cent of the planet's surface covered by water, the oceans remain one of the world's great mysteries and untapped resources.

"It's predicted that in 50 years' time there will be more competition between nations to live and work at sea or under it. So it's with this in mind that the Royal Navy is looking at its future role, and how it will be best equipped to protect Britain's interests around the globe.”

Defence Minister Harriett Baldwin said: "These remarkable designs display the great promise of our young engineers and scientists and the great ambition of the Royal Navy.

"This kind of innovation is at the heart of defence and the UK's world-leading capability. That's why we are using our rising budget to invest in high-tech capability to keep our Armed Forces at the cutting-edge, and our £800 million Innovation Fund aims to take advantage of exactly these kinds of futuristic ideas."

Secretary of State Michael Fallon said that the ideas proposed were the most important he had seen.

When the Royal Navy were asked about the biggest technological constraints they faced, they declared that there are two major technological hurdles to overcome.

Firstly, the sea is still the best place on the planet to hide and submarines will continue to be the ultimate stealth weapons of war.

Second, it is still tough to communicate underwater in terms of range and bandwidth. A lot of work is being done on this area, and the RN continues to be world leaders in this research and is looking at the commercial sector to help solve these problems.

The Navy point out that the inventor of the modern submarine, John Philip Holland, was inspired by the Jules Verne science fiction novel “20,000 Leagues Under the Sea” published in 1870. And technology used in Star Trek 30 years ago is now embedded into our phones and watches.

Ali Roy’s contribution was acknowledged by Saab’s director of business development and strategy, Bo Rydell who sent his congratulations and thanks to her for her commitment to the underwater world.