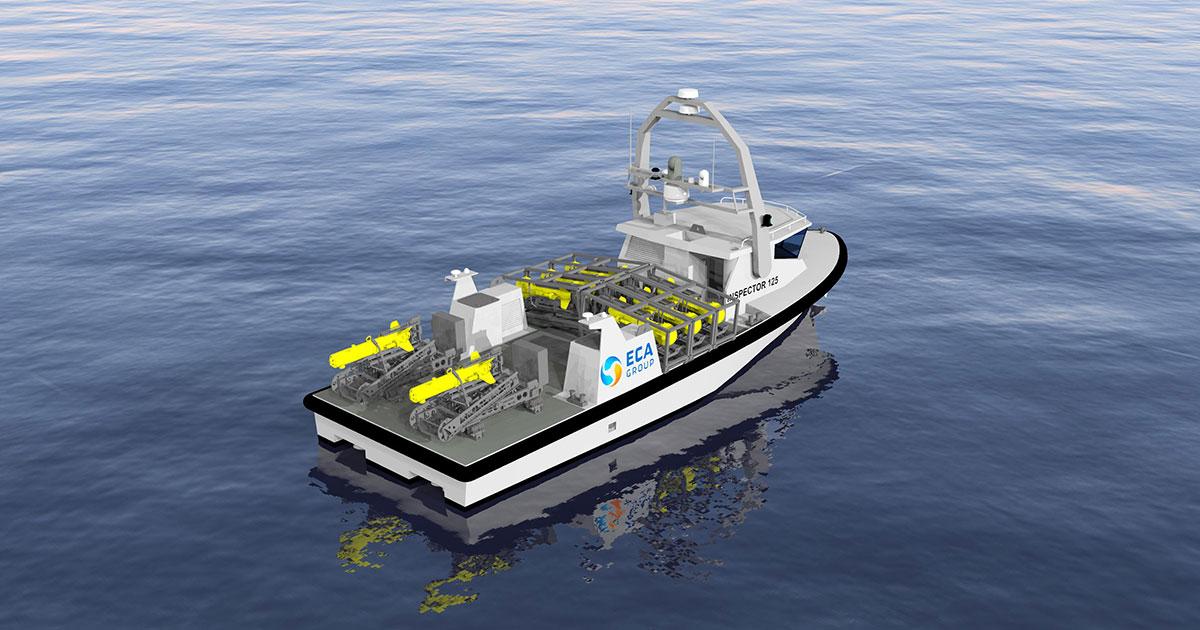 ECA GROUP, in collaboration with its naval architecture subsidiary MAURIC, integrates a new USV – (Unmanned Surface Vehicle) into its range of naval drones systems. The new INSPECTOR 125, based on an operational platform, is designed for high seas operations.

Combining a sea-proven platform from MAURIC with a dronization kit common to the other USVs in the ECA GROUP range, the INSPECTOR 125 benefits from the latest technologies with unrivalled performances on the naval surface drone market. Designed to be unsinkable and highly shock-resistant, this USV has important payload and towing capabilities. This new generation naval surface drone is dedicated to defense and security missions such asMine Counter Measures (MCM), anti-submarine warfare (ASW), Intelligence / Surveillance / Reconnaissance (ISR) or Forces support and protection (FSP).

The INSPECTOR 125 is the result of a joint development between ECA and its subsidiary MAURIC. The platform is based on the V2 NG rescue boats designed by MAURIC for the S.N.S.M (Association of French Sea Rescuers). Originally developed in 2008 and modified in 2014, this craft produced in more than 20 units has proved its efficiency during search and rescue operations in the most difficult environmental conditions. Being robust and powerful, the V2 NG is particularly suitable for a new naval surface drone design.

" The choice of the design of the boat was made in response to our extremely high requirements on the survivability of the boat which must be able to intervene at all times and to ensure the safety of the crew and the rescued people, even after a possible damage. Thus, the unsinkability of the boat even after damage, her resilience gives her a high level of performance. In addition, the hull, propelled by 2x410hp engines ensures speed and sea-keeping performances unequaled in this range of boats with regard to the specificity of rescue missions at sea. It is a highly important boat in our fleet. In 2019, we will build 4 new boats of this type. " says Jean-Christophe Noureau, Technical Director of S.N.S.M.

The naval architects of MAURIC and the engineers of ECA GROUP have developed this robust and sea proven platform to integrate a dronization kit featuring autonomous navigation capabilities as well as several launch and recovery systems (LARS) for the various drones of ECA GROUP: Autonomous Underwater Vehicles (AUVs), towed sonars (TSSS or TSAS), inspection and destruction remotely operated vehicles (ROVs) provided by ECA GROUP or equipment from other manufacturers.

"For us, this alliance of our respective know-how in robotics and naval architecture, has been particularly fruitful for designing the INSPECTOR 125. We innovated each one in our field to obtain a new generation of naval surface drone. It is more resistant and enduring, more powerful, more autonomous and more modular. " says Pascal Lemesle, General Manager of MAURIC.

High carrying capacity and reconfiguration, assets for a complete "toolbox"

With a length of 12.3m and an overall width of 4.2m, the INSPECTOR 125 can carry up to 3 tons of payload. In the standard version it is equipped with two hydrojets allowing a top speed of over 25 knots at full load displacement, but is also offered with two shaft lines and propellers to meet specific towing requirements. Its large rear deck, its mast and underwater pole allow carrying many payloads and sensors specific to the missions of surveillance, oceanographic survey or mine counter measures.

INSPECTOR 125 is able to:
Launch and recover in rough seas:
a towed sonar such as the ECA GROUP T18-M sonar.
a medium-sized AUV such as the A18-M AUV.
identification and / or neutralization ROVs such as the SEASCAN Identification ROV and the K-STER C neutralization ROV. It can carry on its main
deck up to 2 SEASCAN and 6 K-STER simultaneously.
Tow a mine-sweeping system composed of several electromagnetic and acoustic modules in particularly rough sea conditions.
Integrate on board or on its hull additional sensors useful for oceanographic monitoring missions and other effectors when operating in "manned" mode with personnel on board.

This high payload capacity makes the INSPECTOR 125 a comprehensive and modular tool. It can be operated and deployed from a ship or the shore and is also air-transportable.
As with all ECA GROUP autonomous robotic systems, the INSPECTOR 125 naval surface drone is fully integrated into the UMIS (Unmanned Maritime Integrated System) system as well as the UMISOFT software suite. ECA GROUP also offers LARS (Launch And Recovery Systems) solutions for the deployment and recovery of INSPECTOR 125 from a 50m+ mothership such as OCTOPODA vessels.

The USV INSPECTOR 125 is a part of the OCTOPODA 500 mothership toolbox.