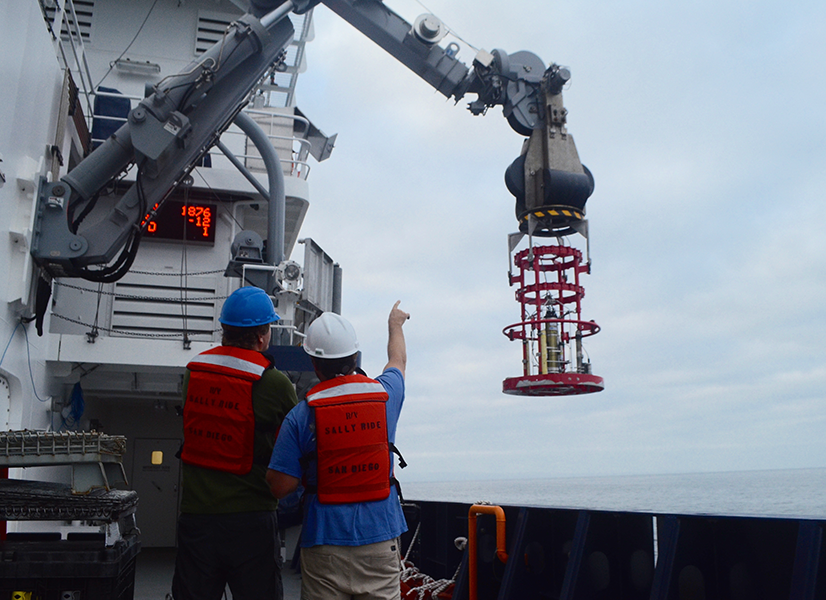 The Department of Defense (DoD) announced awards to researchers at Scripps Institution of Oceanography, UC San Diego that will help scientists characterize waves, improve ocean weather and climate prediction, and analyze acoustics in the deep ocean.

The Defense University Research Instrumentation Program (DURIP) grants support the development of instruments that have a wide range of military applications. In all, 14 researchers from UC San Diego received awards.

“These awards will enable significant advancements that have immediate importance to military applications and long-term societal benefits,” said UC San Diego Chancellor Pradeep K. Khosla. “I am especially proud of our researchers this year because of the unprecedented number of awards our university received. This underscores the significance of our work, as well as the positive impact and return on investment that our campus provides.”

"I am so proud of the valuable research conducted by UC San Diego’s Scripps Institution of Oceanography,” said U.S. 53rd District Rep. Susan Davis. “This research enables the Navy to maintain technical superiority by hastening the transition of basic research into practical application. DoD’s recognition of Scripps’ important work is evident in its decision to award eight Defense University Research Instrumentation Program (DURIP) awards to the institution. The collaboration between the Department and research universities is vitally important to our national security, and I look forward to seeing the great work these grants will fund.”

"These eight awards to Scripps Oceanography demonstrate that the DoD understands the importance of the blue economy and creation of innovative BlueTech from a national security point-of-view,” said Michael Jones, president of The Maritime Alliance and organizer of the San Diego BlueTech cluster, a community of maritime technology organizations. “BlueTech creation is also the precursor to transition to industry and the creation of good paying blue jobs critical for our economy.”

The awards, administered through the Office of Naval Research (ONR), continue a history of collaboration between Scripps and the U.S. Navy that dates back to the years immediately prior to World War II, when the Navy would charter Scripps’ sole research vessel, E.W. Scripps, for research. In recognition of the 70th anniversary of the D-Day invasion, the Navy acknowledged the role played by Scripps researchers in developing ways to time amphibious assaults on Nazi positions using wind forecasts to select periods with favorable surf and swell conditions.

"DURIP is an important component in ONR's strategy for development and employment of new research instrumentation,” said Frank Herr, director of ONR’s Ocean Battlespace Sensing Department. “Our at-sea research initiatives often rely on DURIP instruments to bring forth the novel science at the heart of the proposed efforts."

"These awards are a testament to the ingenuity and world-leading research being done throughout Scripps," said Scripps Director Margaret Leinen. “They acknowledge the importance of our mission to understand and protect the planet.”

The DURIP awards support development of a number of different oceanographic tools:

Oceanographer Matthew Alford received a DURIP award to develop a modular system for measuring both shear and temperature microstructure, as well as other quantities such as microconductivity, in an inexpensive, low-power package capable of telemetering data back to shore. Alford’s research aims to better understand ocean mixing, one of the most critical factors to observe in order to improve scientists’ understanding of the ocean. The system will be easily deployable on moored profilers, gliders, wire walkers, floats, and other autonomous vehicles. Better understanding and measurement of these pro- cesses is vital for improving the fidelity of regional and climate models and better prediction of ocean state.

Oceanographer Falk Feddersen has received a DURIP award to develop an Inner-shelf Exchange Sampling Array. His long-term objective is to use field observations to study the physics of and validate numerical models of near-shore and inner-shelf processes, including the transport and dispersion of tracers such as turbidity, chlorophyll, and temperature. The exchange of tracers such as pollution, sediment, and plankton between the nearshore and the inner shelf, important to Navy operations, is poorly understood. The Inner-shelf Exchange Sampling Array will expand researchers’ ability to make measurements in the inner-shelf allowing study of nearshore/inner-shelf exchange. The project will develop lightweight, easily deployable thermistor chain moorings, and expand on small boat exchange sampling capabilities.

A DURIP grant awarded to oceanographer Shaun Johnston received funds to purchase two Underway conductivity, temperature, and depth (UCTD) systems manufactured by Carlsbad, Calif. firm Oceanscience. The UCTD was developed at Scripps by researchers Dan Rudnick and Jochen Klinke. The UCTD includes a Seabird CTD probe, a tail on which line is spooled, and a compact winch system. When the UCTD probe is dropped from the stern of a ship, it drops straight down at about four meters per second as line unspools from the winch and tail simultaneously. The UCTD can profile down to 500 meters from a ship moving at 10 knots. On a cruise in 2013, a system loaned by Oceanscience was used to make over 500 profiles to 500 meters (1,640 feet) in the Pacific island country of Palau to examine the effects of topography on the strong equatorial current system. In the coming years, the UCTD will be used in Palau on the Coral Reef Research Foundation’s research vessel Kemedukl during ONR’s Flow Encountering Abrupt Topography (FLEAT) initiative.

Oceanographer Andrew Lucas received funds to purchase a fiber optic Distributed Temperature Sensing (DTS) system and develop a specialized winch for fiber optic cable deployment. The fiber optic DTS is a transformative monitoring technology that allows for the continuous rapid measurement of temperature along a fiber optic cable of up to five kilometers (3.1 miles) in length. Scripps’s Ocean Physics Group was the first oceanographic adopter of the technology originally developed for use in the petroleum industry, utilizing leased DTS systems in projects funded by ONR and the National Science Foundation. In addition to acquiring its own system (a first for the oceanographic community), the group will use its experience in designing and building specialized winches to expand the technology's oceanographic applications in the coastal ocean, deep sea, and polar regions.

Oceanographers Jennifer MacKinnon and Amy Waterhouse received an award to purchase five newest-generation acoustic Doppler current profilers. MacKinnon collaborated with Poway, Calif. firm Teledyne RD Instruments and was involved in the initial testing of the Sentinel-V profiler with deployments off Scripps Pier in 2013. The instruments are designed for high-frequency, high-resolution sampling of ocean currents in shallow water near the coast. They will be used in upcoming fieldwork sponsored by ONR, designed to explore how waves and currents control the transport and mixing of heat and nutrients in the coastal ocean.

Marine bioacoustician Ana Širović received funds to augment the acoustic recording abilities of her lab and allow for concurrent cetacean-prey studies. The DURIP award will enable procurement of a passive acoustic recorder, two active acoustic systems, and two conductivity-temperature-depth recorders. Deployed in a mooring configuration, these systems will enable collection of long-term concurrent data on marine mammal presence and behavior in relation to prey and environmental features. This setup will resolve a temporal mismatch problem that is often an issue in studies of cetaceans and their prey, while at the same time providing a cost-effective way to conduct such studies over a long term.

Two awards to oceanographer Eric Terrill will allow Scripps to acquire measurement capabilities for radio studies and leverage recently developed observational tools, analysis methods, and unmanned platforms. An unmanned surface platform powered by ocean waves will be used to conduct radio propagation studies near the surface of the ocean, and interface with other marine robotic systems. In addition, an award to acquire two high frequency surface current mapping radars will be used to measure and map ocean currents in the western Pacific Ocean to improve the science behind ocean forecast models operating in the tropical Pacific. The systems will operate on remote islands, and remotely report via satellite communications.

Chemistry professor Neal Devaraj received an Army Research Office award to purchase a confocal microscope to observe the dynamics of lipid membranes. The instrument will also allow researchers in Devaraj’s laboratory to control the dynamics in artificial cells and, more specifically, to do photoactivation studies on those cells, using light to trigger reactions on artificial cell membranes.

Shaya Fainman, a professor in the Department of Electrical and Computer Engineering, received a DURIP award to purchase a tip enhanced Raman spectroscopy (TERS) system, which is a high-resolution characterization tool for nanotechnology research. Fainman’s research focuses on the design and realization of ultrafast and nanoscale optical systems. The TERS system will add strain characterization capabilities in the studies of nonlinear metamaterials, nanolasers, and nanophotonic devices. The new instrument will also advance researchers’ capabilities in biomolecule detection and brain imaging.

Mechanical engineering professor Geno Pawlak has received funding for an instrumentation system that will allow his team to make in situ measurements of water properties and hydrodynamic forcing in coastal environments. Pawlak's research focuses on turbulence and stratified flow dynamics in coastal environments. The system includes two novel wave-powered autonomous vertical profilers called Wirewalkers, developed by the Ocean Physics Group at Scripps Oceanography. These instruments have been shown to be reliable for fast, high-resolution profiling in coastal waters. The instrumentation array is designed to analyze the structure of internal waves on a vertical and temporal axis, as well as biological responses in tropical reefs. It will be deployed in support of the North Arabian Sea Circulation project funded by the Office of Naval Research in the Seychelles archipelago in the Indian Ocean.

Kal Seshadri, a professor in the Department of Mechanical and Aerospace Engineering, received an award to design and build a "High Pressure Combustion Experimental Facility" (HPCEF) that will allow researchers to characterize fundamental aspects of combustion for jet fuels, diesel, gasoline, and biofuels. This will be one of the few facilities in the world that will allow fundamental experimental studies on combustion to be carried out at elevated pressures up to 60 bar – about 60 times the pressure in the earth's atmosphere. The data at these elevated pressures will be used to test the accuracy of predictive models required to advance current understanding of fundamental chemical processes that characterize the combustion of these fuels. The data will provide fundamental knowledge that is relevant to the Army's need for high-performance propulsion systems designed to operate at high temperature and high pressure. In addition, the data will be crucial in developing alternative fuels, thus contributing to energy independence, security and minimizing global warming. Seshadri is an expert in energy conversion in reacting flows. His research is focused on then mathematical description of fundamental aspects of reacting flows with application to ignition and extinction of flames, the combustion of commercial fuels, alcohols and biodiesel, and the mechanisms involved in the formation of pollutants and the destruction of toxic compounds.

Electrical and computer engineering professor Dan Sievenpiper received a grant to purchase two separate pieces of equipment to aid his research in electromagnetics. The first is a major addition to his high-performance computing cluster, which enables more students to perform larger and faster simulations to design antennas, metamaterials, circuits, and other electromagnetic structures. The second is an arbitrary waveform generator. This device will work with the group’s existing equipment to measure the effects of high power microwave signals on electronics. This will enable the group to develop coatings to protect sensitive electronics from damage due to high power microwaves. Sievenpiper's research is focused on novel electromagnetic structures for antennas and other applications.