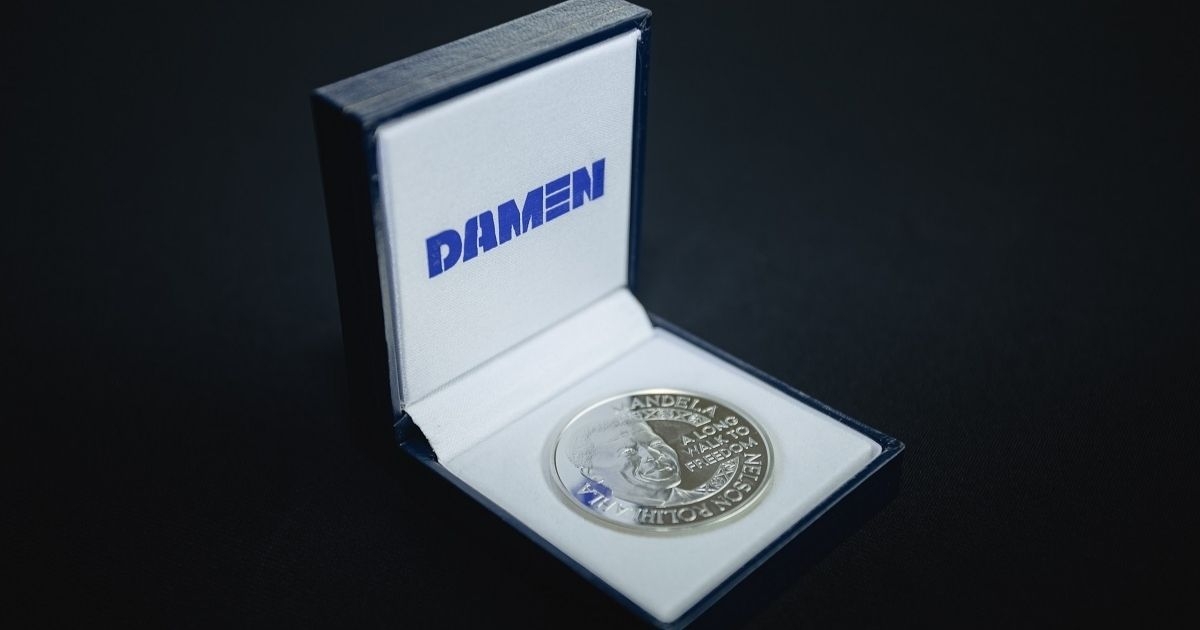 The MMIPV vessels will augment South Africa’s maritime security by enhancing the country’s capability to respond effectively, rapidly and cost-effectively to threats such as illegal trafficking and fishing.

The keel laying ceremony is a maritime tradition that dates back to the time of wooden ships and is said to bring luck to the ship during construction and to the captain and crew during the vessel’s lifetime. The tradition involves placing a newly minted coin on the keel and building over it.

The coin laid at the DSCT event was a commemorative medal made in honour of the late President Nelson Mandela’s 1993 Nobel Peace Prize win. The coin was placed on the keel by the Chief of the Navy (Vice Admiral Hlongwane). The keel bar was then lowered on top of the coin and welded into the structure – a privilege that went to Lucian Norman, from Atlantis, who is one of the top performing second-year apprentices at Damen’s training school. The school has, since its inception in 2010, educated more than 200 young people previously from disadvantaged communities. 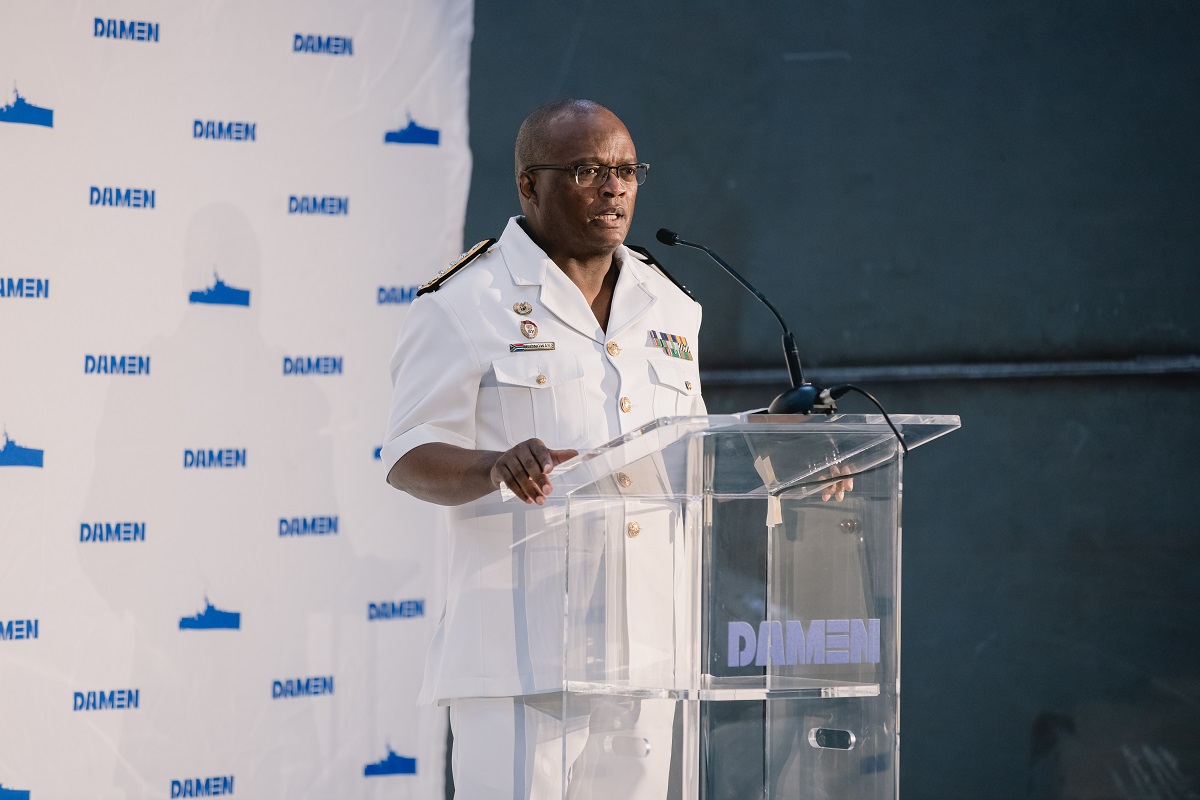 Speaking at the event, CEO of ARMSCOR, Adv. Solomzi Mbada, stated that “the acquisition strategy for this project included Commercial-Off–The-Shelf (COTS) equipment, as well as compliance with the dti 60% local content shipbuilding designation requirement, Defence Industrial Participation (DIP) and National Industrial Participation (NIP). This ensured that ARMSCOR could maximise local participation and ensure that the vessels can be supported locally, thereby minimising the life cycle support costs. The strategy further acted as an impetus for the shipyard to improve its local infrastructure and investment in human resources, creating jobs that are much needed to boost the South African economy and help reduce the high unemployment rate.

Speaker Vice Admiral Mosuwa Samuel Hlongwane, Chief of South African Navy, said: “I would like to thank the DSCT team for ensuring that the requirements as articulated by the South African Navy have been brought to light. Amidst the challenges of COVID 19, you have risen to the occasion”. 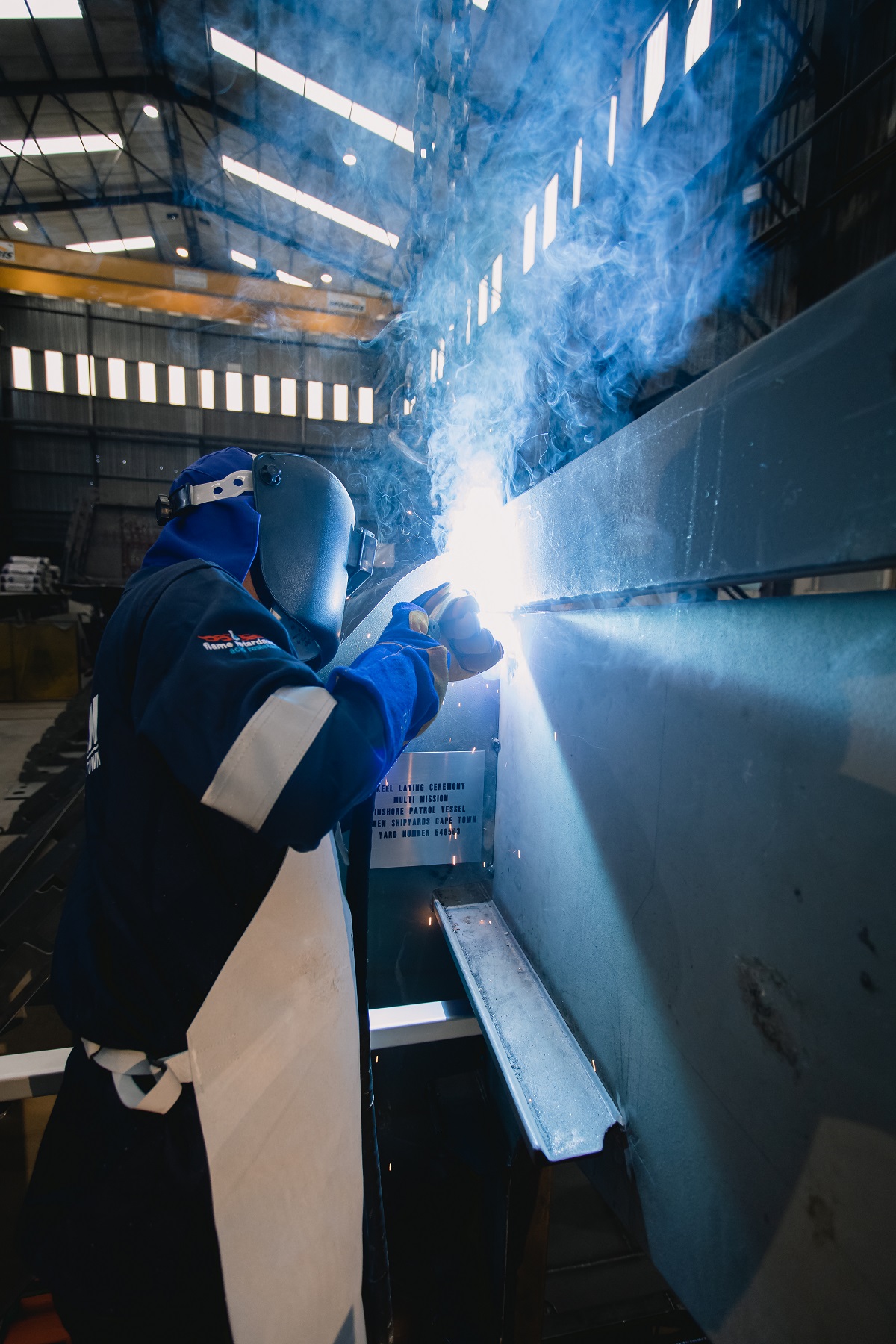 The keel bar was then lowered on top of the coin and welded into the structure – a privilege that went to Lucian Norman, from Atlantis, who is one of the top performing second-year apprentices at Damen’s training school

DSCT’s managing director, Mr. Jankees Trimpe Burger, elaborates: “The project undertaking serves as a demonstration of Damen Maritime Security Solutions in action. With this initiative, Damen not only delivers a ship, but also a total maritime solution, encompassing every aspect of vessel operation throughout the lifecycle as well as a contribution to a sustainable maritime industry in the region in which it operates”. 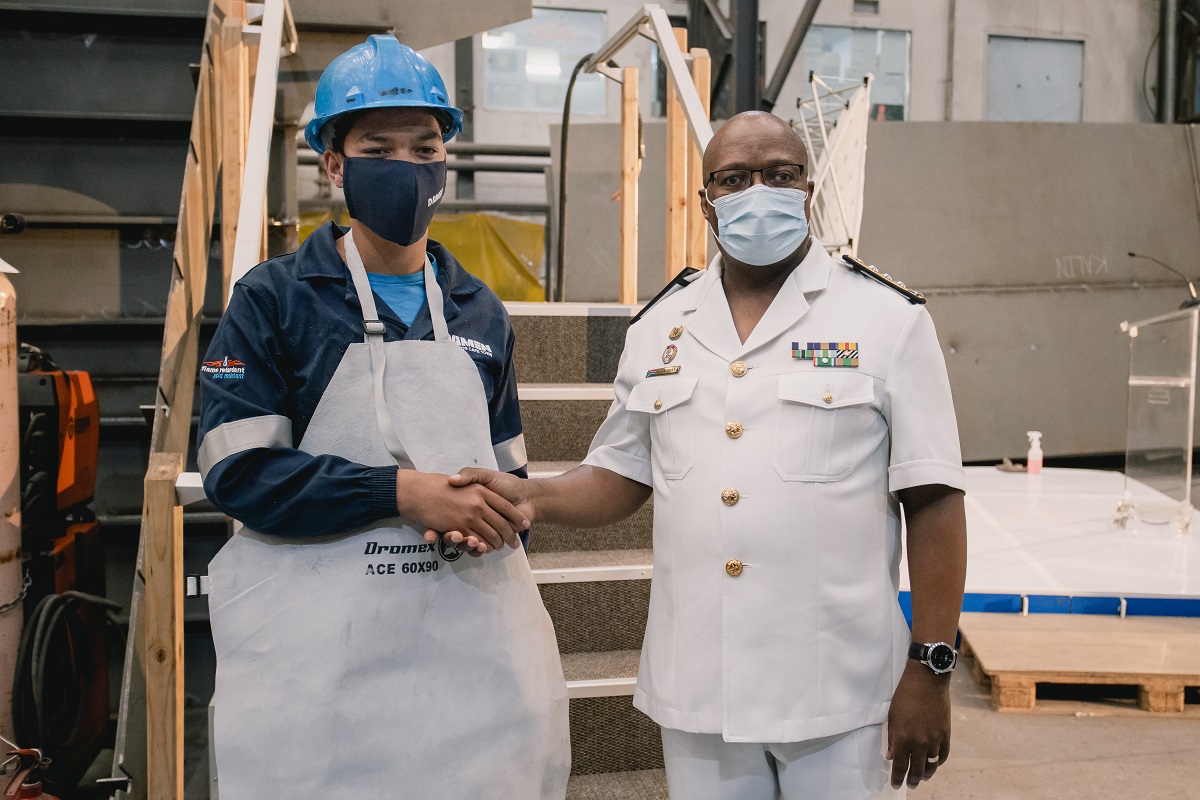 Damen has enthusiastically embraced, adopted and integrated the various applicable government programmes such as DIP, NIP, the Department of Trade and Industry’s Local Content and Enterprise and Supplier Development (ESD) and the Youth Employment Service (YES Initiative) into its project approach, and by doing so is looking to over-achieve on the requirements of many of these programmes. Damen has worked hard to meet the project’s local content requirements of 60%, issuing contracts to a large number of local suppliers. As a result of their work on this project, suppliers are already working on other Damen projects both in and outside of South Africa. Additionally, DSCT’s undertaking of the project has created over 300 direct jobs and over 1,000 indirect jobs in line with the South African Government’s Operation Phakisa objectives.

The event attendance was reduced to a minimum to ensure the safety of all attendees during the ongoing coronavirus pandemic.