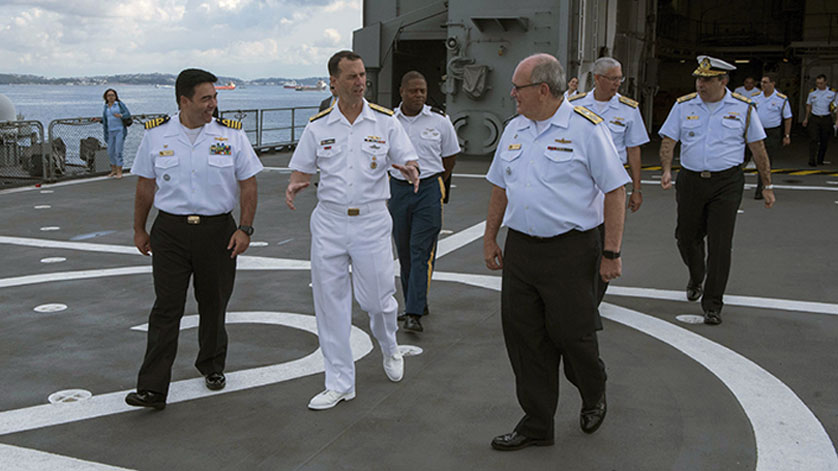 During the visit, CNO also met with his Brazilian counterpart, Adm. Eduardo Bacellar Leal Ferreira, commander of the Brazilian navy, to seek opportunities to expand their naval partnership and increase interoperability through officer exchange programs and combined operations.

"The end result of these naval exchanges and exercises is the establishment of collaboration between our inter-American institutions and a posture that helps us confront shared security challenges and keep this hemisphere prosperous orderly and secure," said Richardson.

Richardson highlighted the fact that Leal Ferreira served as instructor in the U.S. Naval Academy's department of seamanship and navigation and that Brazilian naval officers regularly study operations and strategy at the U.S. Naval War College and Naval Postgraduate School.

"These are strategic friendship that are formed by virtue of these exchanges," said Richardson. "This makes fast, agile and responsive combined operations so much easier, because you can pick up the phone and call your friend. There's a bond of trust and confidence that has existed for decades."

Following Richardson's remarks, he was joined onstage by Leal Ferreira, and the two heads of navy conducted a question-and-answer session with Brazilian navy officers on global security, strategy and current issues.

"This is one of the things that binds us together-we are both global nations, and we both have navies that have to protect those global interests," said Richardson.

"The United States and Brazil have worked and sailed together to defend their maritime security for hundreds of years," said Richardson. "We celebrate the long-standing partnership between Brazil and the United States as we stand shoulder-to-shoulder to defend global maritime security. We celebrate inter-American values, and our shared interest in a prosperous, orderly, and secure hemisphere."

The visit is part of a series of engagements in South America, beginning with the Inter-American Naval Conference (IANC) in Colombia, where 18 heads of navy met to discuss strengthening partnerships and increasing maritime cooperation.

Esri Partners with XPRIZE Foundation to

Statoil and Partners Start Production at

Bluestream and Skeye Partners in Offshor

Wärtsilä Partners with AW-Energy on Wave

CTG Call to Expand Its Global Network of

ExxonMobil and Petrobras in Strategic Al