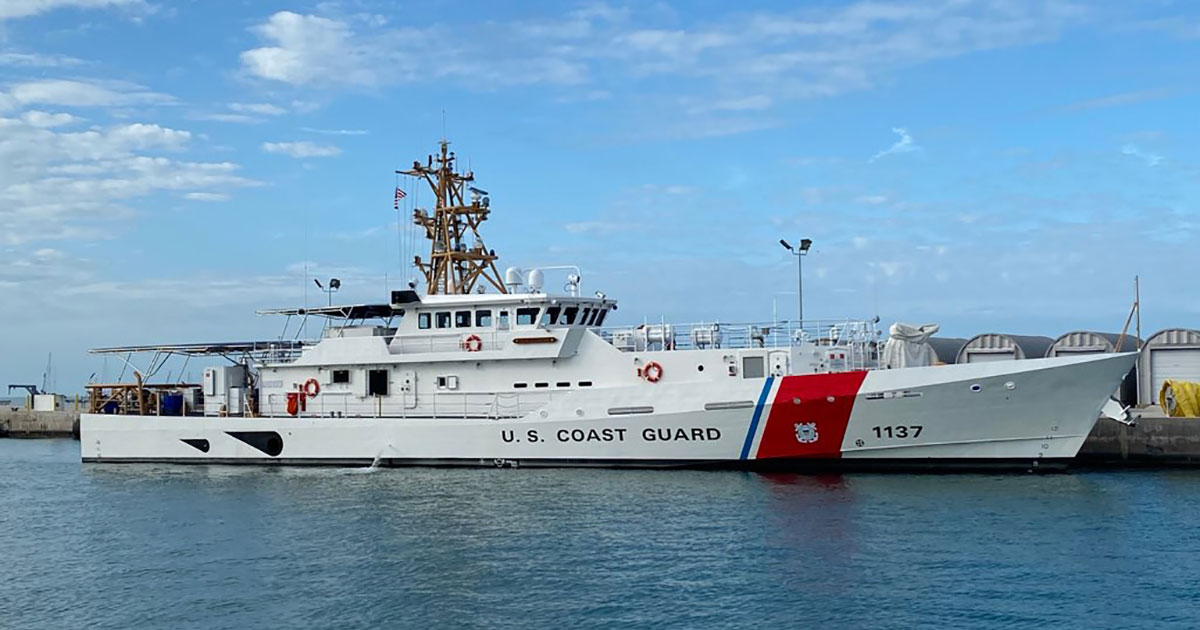 Bollinger Shipyards has delivered the USCGC EDGAR CULBERTSON, the 37th Fast Response Cutter (FRC) to the U.S. Coast Guard. The Coast Guard took delivery on the 6th of February, 2020 in Key West, Florida.

Each FRC is named for an enlisted Coast Guard hero who distinguished him or herself in the line of duty. This vessel is named after Coast Guard Hero Edgar Culbertson, who was a boatswain’s mate first class petty officer and perished in the line of duty while trying to rescue three teenage brothers during a fierce storm in Duluth, Minnesota in April, 1967. He was awarded the United States Coast Guard Medal for his bravery and heroism.

Bollinger President & C.E.O. Ben Bordelon said, “We are very pleased to announce the latest FRC delivery, the USCGC EDGAR CULBERTSON. The USCGC EDGAR CULBERTSON is the second of three fast response cutters to be home-ported in Galveston, TX. The industrial base of over 600 local men and women at Bollinger constructing these high quality vessels have consistently delivered over half of the program of record to date, with the highest quality, on schedule and within budget. We are extremely proud that Bollinger has built more than 175 patrol boats, which includes the USCG Island Class, USCG Marine Protector Class, USN Cyclone Class and USCG Sentinel Class Fast Response Cutters.”

Congressman Steve Scalise stated, “While providing the United States Coast Guard with an extremely capable and affordable asset, the Bollinger FRC program also provides tremendous benefits to the State of Louisiana, not only through highly-skilled and well-paying jobs, but also through its direct and indirect spending, resulting in millions of dollars of economic benefits to the state. I am excited to represent the extraordinary men and women at Bollinger who build these state-of-the-art vessels, and look forward to continuing the healthy relationship that Bollinger has with the United States Coast Guard and the FRC program.”

The 154-foot Sentinel-class Fast Response Cutter has a flank speed of 28 knots, state of the art command, control, communications and computer technology, and a stern launch system for the vessel’s 26-foot cutter boat. The FRC has been described as an operational “game changer,” by senior Coast Guard officials and have been deployed as far 4,400 nautical miles from homeport, highlighting FRC’s hugely expanded operational reach and capability.

Bollinger Shipyards LLC (www.bollingershipyards.com) is a leading designer and builder of fast military patrol boats, ocean-going double hull barges, offshore oil field support vessels, tug boats, rigs, liftboats, inland waterways push boats, barges, and other steel and aluminum products from its new construction shipyards. Bollinger has 10 shipyards and all are strategically located throughout Louisiana with direct access to the Gulf of Mexico, Mississippi River and the Intracoastal Waterway. Bollinger is the largest vessel repair company in the Gulf of Mexico region.