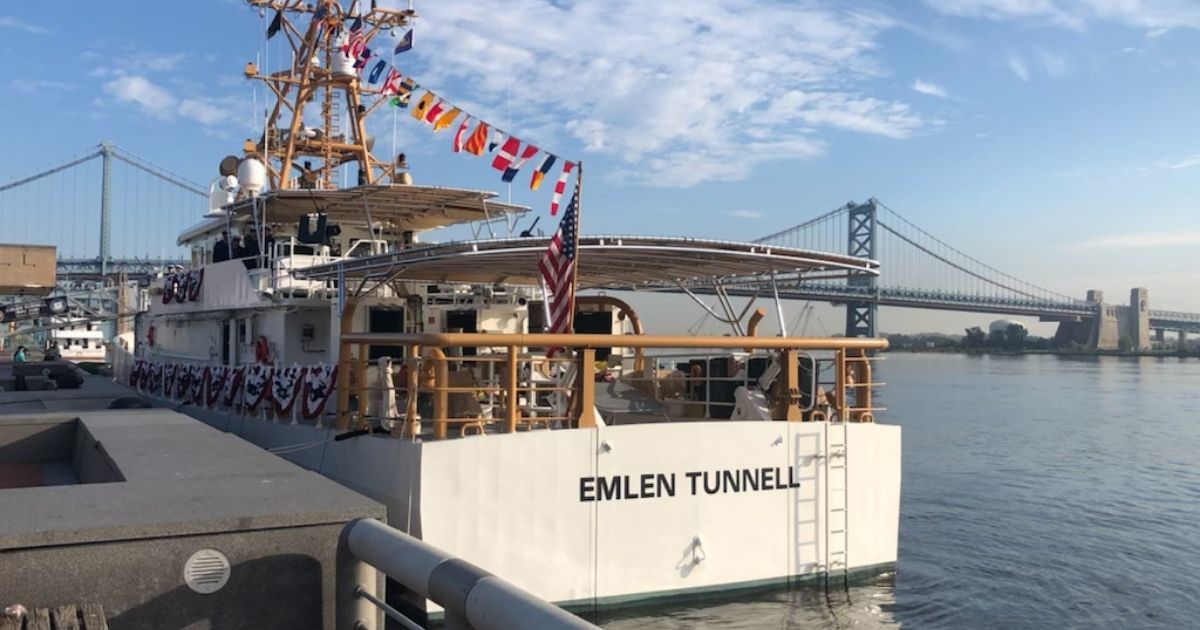 Named in honor of Coast Guard hero and NFL great Emlen Tunnell, the cutter is the fourth of six FRCs to be home-ported in Manama, Bahrain, which will replace the aging 110’ Island Class Patrol Boats, built by Bollinger Shipyards 30 years ago, supporting the Patrol Forces Southwest Asia (PATFORSWA), the U.S. Coast Guard’s largest overseas presence outside the United States.

“As a former NFL player, this vessel means a lot to me as its namesake is a personal role model,” said Ben Bordelon, Bollinger President and CEO. “I’m also incredibly proud that Bollinger continues enhancing and supporting the Coast Guard’s operational presence and mission in the Arabian Gulf. Our unique experience and long history building for the Coast Guard is unparalleled and has shown time and time again that we can successfully deliver the highest quality vessels on a reliable, aggressive production schedule and cost, even in the most challenging circumstances.”

“Over 650 men and women are dedicated to building these vessels,” said Charles “Skip” Bowen, former Master Chief Petty Officer of the Coast Guard and current Vice President of Government Relations at Bollinger, in his remarks during the ceremony. “Normally, I would say that the tenacity and resilience of these men and women are unmatched. However, I think Emlen Tunnell has them beat. It was the tenacity and resilience of this vessel’s namesake that led to his status as a legend both on the field and in service to our country.”

Present at the ceremony were Adm. Karl Schultz, Commandant of the United States Coast Guard, who presided over the ceremony, as well as other senior Coast Guard officials, members of the Tunnel family and representatives from the National Football League and Pro Football Hall of Fame.

The U.S. Coast Guard took delivery of the 154-foot USCGC EMLEN TUNNELL in Key West, Florida in July of this year. The cutter is the 168th vessel Bollinger has delivered to the Coast Guard over a 35-year period and the 45th FRC delivered under the current program. Notably, the majority of the build occurred despite the COVID-19 global pandemic and six named storms impacting the Gulf region last year, all of which affected Louisiana and two of which made landfall in the state as hurricanes, including Hurricane Laura – a Category 4 storm tied with this year’s Hurricane Ida as the strongest to hit the state since the Great Storm of 1856. Despite these challenges, Bollinger undertook precautions to ensure the health and safety of employees and maintained its record of on-time deliveries to the Coast Guard.

Bowen Continued: “The men and women who built this ship are artists in every sense of the word and it shows in the construction of this vessel. There is no other vessel in the world like this ship. And this amazing workforce brings it home with every delivery. So, whether off the coast of Miami, in the Middle East where this ship will operate, or in the far reaches of Alaska and the Pacific, Bollinger-built Fast Response Cutters are continuing a long tradition of exceeding all expectations in mission effectiveness, endurance and capability. We look forward to continuing our partnership with the Coast Guard and supporting the brave men and women that serve in the defense and security of our Nation for many years to come.”

Earlier this year, Bollinger submitted its proposal to the United States Coast Guard to build Stage 2 of the Heritage-class Offshore Patrol Cutter (OPC) program. If chosen, Bollinger would construct and deliver a total of 11 vessels to the U.S. Coast Guard over the next decade, helping to sustain the Bollinger workforce through 2031. Offshore Patrol Cutters (OPCs) will provide the majority of offshore presence for the Coast Guard’s cutter fleet, bridging the capabilities of the 418-foot national security cutters, which patrol the open ocean, and the Bollinger-built 154-foot FRCs, which serve closer to shore. The OPCs will conduct missions including law enforcement, drug and migrant interdiction, search and rescue, and other homeland security and defense operations.