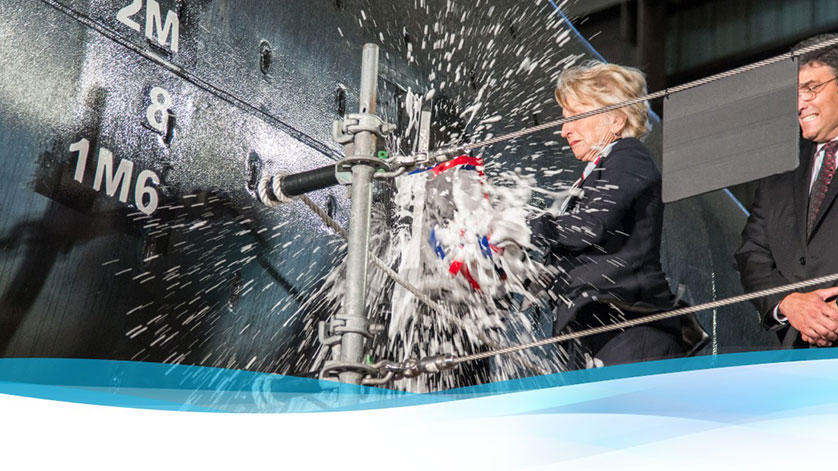 The ship’s sponsor, Congresswoman Jane Harman headlined the group of officials, naval guests, civic leaders, community members and Austal employees who attended the ceremony beneath the hull of the ship in Austal’s final assembly bay.

“Austal USA is having tremendous success with the EPF program. We are delivering two ships a year and watching these great ships deploy in less than a year of delivery. Our talented shipbuilding team has done a great job in efficiently building the EPF, providing our Navy with an extraordinarily capable vessel that will honor the great city of Bismarck as she operates around the world,” said Austal USA President Craig Perciavalle.”

Congresswoman Harman resigned from Congress on February 28, 2011, to join the Woodrow Wilson Center as its first female Director, President and CEO. Representing the aerospace center of California during nine terms in Congress, Harman served on all of the major security committees, including six years on the Armed Services Committee, eight years on the Intelligence Committee, and eight years on the Homeland Security Committee.

Prior to serving in Congress, Harman was Staff Director of the Senate Judiciary Subcommittee on Constitutional Rights, Deputy Cabinet Secretary to President Jimmy Carter, and Special Counsel to the Department of Defense.

USNS City of Bismarck (EPF 9) is the first naval vessel to be named in honor of North Dakota's capital city. According to the Mayor of Bismarck, at the time the Secretary of the Navy announced the name of the ship, "We have the highest percentage of people that enlist and serve our country. So we're being recognized for what we give to our country."

Eight Spearhead-class EPFs have been delivered and are serving as an affordable solution to fulfilling the Military Sealift Command’s requirements worldwide. USNS Yuma was delivered to the Navy in April and three more EPFs are under construction at Austal’s Mobile, Ala. shipyard.

In addition to being in full rate production for the EPF program, Austal is also delivering two Independence-variant Littoral Combat Ships (LCS) a year for the U.S. Navy. Five LCS have been delivered, one of which is currently deployed in the waters off eastern Asia, while an additional six are in various stages of construction. Two of those six are scheduled to be delivered this year.

Gulf of Mexico Workshop on International

A Successful Float-Out for USNS Hershel

Nexans Celebrates the Next Step in Cable

Trelleborg Celebrates Over 20 years of E