The fundamental driver for oil activity is price, which reflects both current assessments of supply and demand, but more importantly, the product’s future. The past six weeks have been a lesson in watching how a free-market struggles to determine what the future holds for oil in a period of increasing uncertainty. As we exited November, the world was watching what OPEC would do at its semi-annual get together—virtually rather than in Vienna. The focus was on implementing the next step in the grand compromise that emerged last spring to deal with the collapsing market in the face of the spreading pandemic. The compromise necessitated the largest production cut in history—10 million barrels per day—with a plan to restore supply in the second half of 2020 and further in 2021. 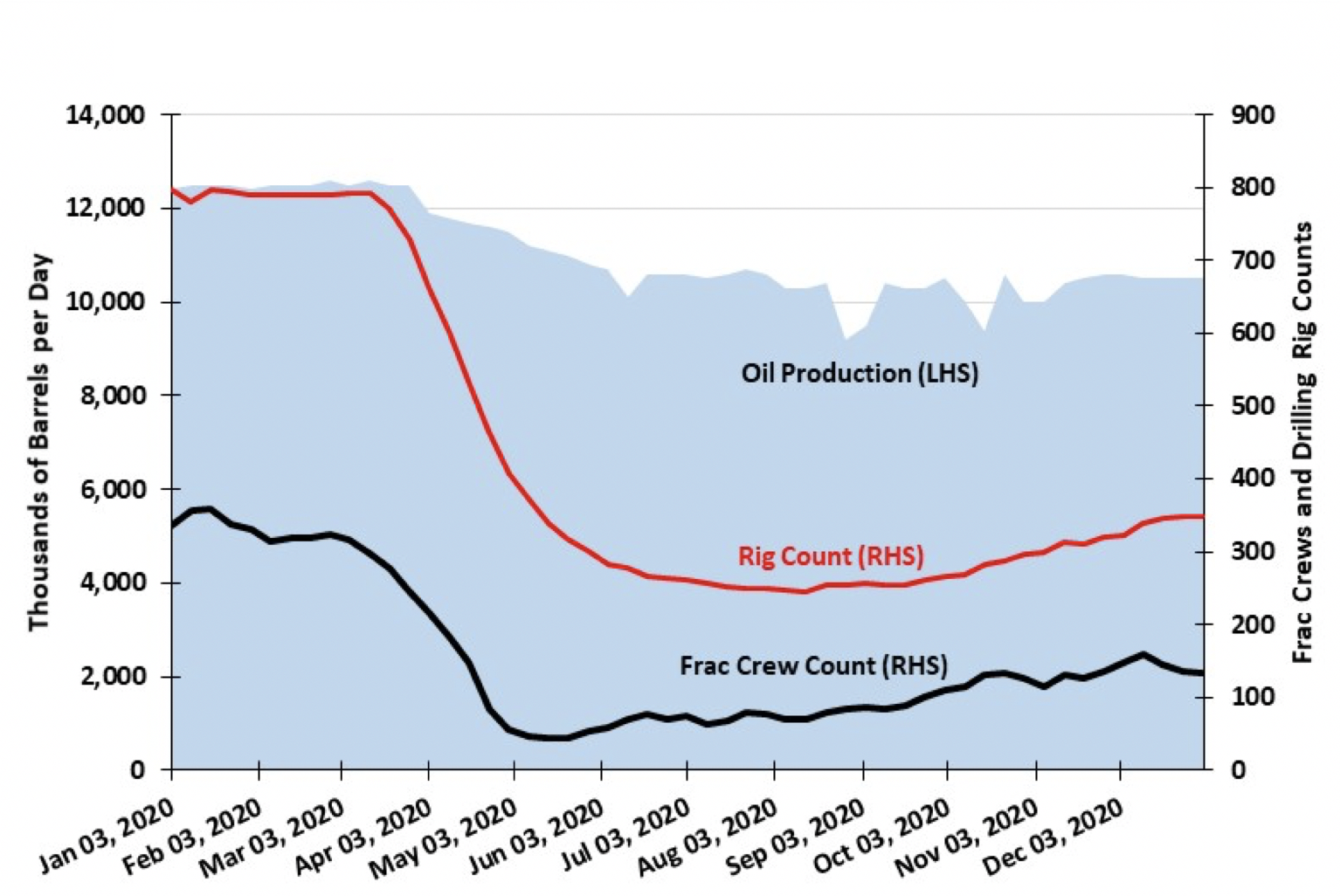 The first supply increment—2 million barrels per day—was added in the fall. Another large slug was to be added in January. Would it be another 2 million barrels, or something less? Would it come at once, or be staged over time? A tense negotiation session between OPEC+ leaders Russia and Saudi Arabia resulted in an agreement to add back 500,000 barrels a day January 1, with monthly market assessments determining future supply increments.

Then came another virus uptick, with governments retreating on unlocking their economies. Future oil demand projections slumped. Russia argued more oil should be added as demand would eventually return; Saudi Arabia wanted to maintain the status quo. Saudi Arabia won, at least for the next two months. But then, surprisingly, it announced a unilateral production cut of 1 million barrels per day. A sign of OPEC+ weakness, or a desperate ploy to lift prices before flooding the market? Understanding the rationale for this move will be crucial to guessing the trajectory of oil prices.

While people cheered oil prices reaching a new milestone—$50 a barrel—will it become the new ceiling or floor? The answer won’t be known for months, or until vaccinations and a retreating virus allow economic activity to expand, lifting oil demand. The initial clue to market clarity will be the trajectory of the U.S. oil rig count. If American producers can now earn healthy margins, expect more rigs and more supply, compounding the dilemma OPEC+ faces in managing its output. 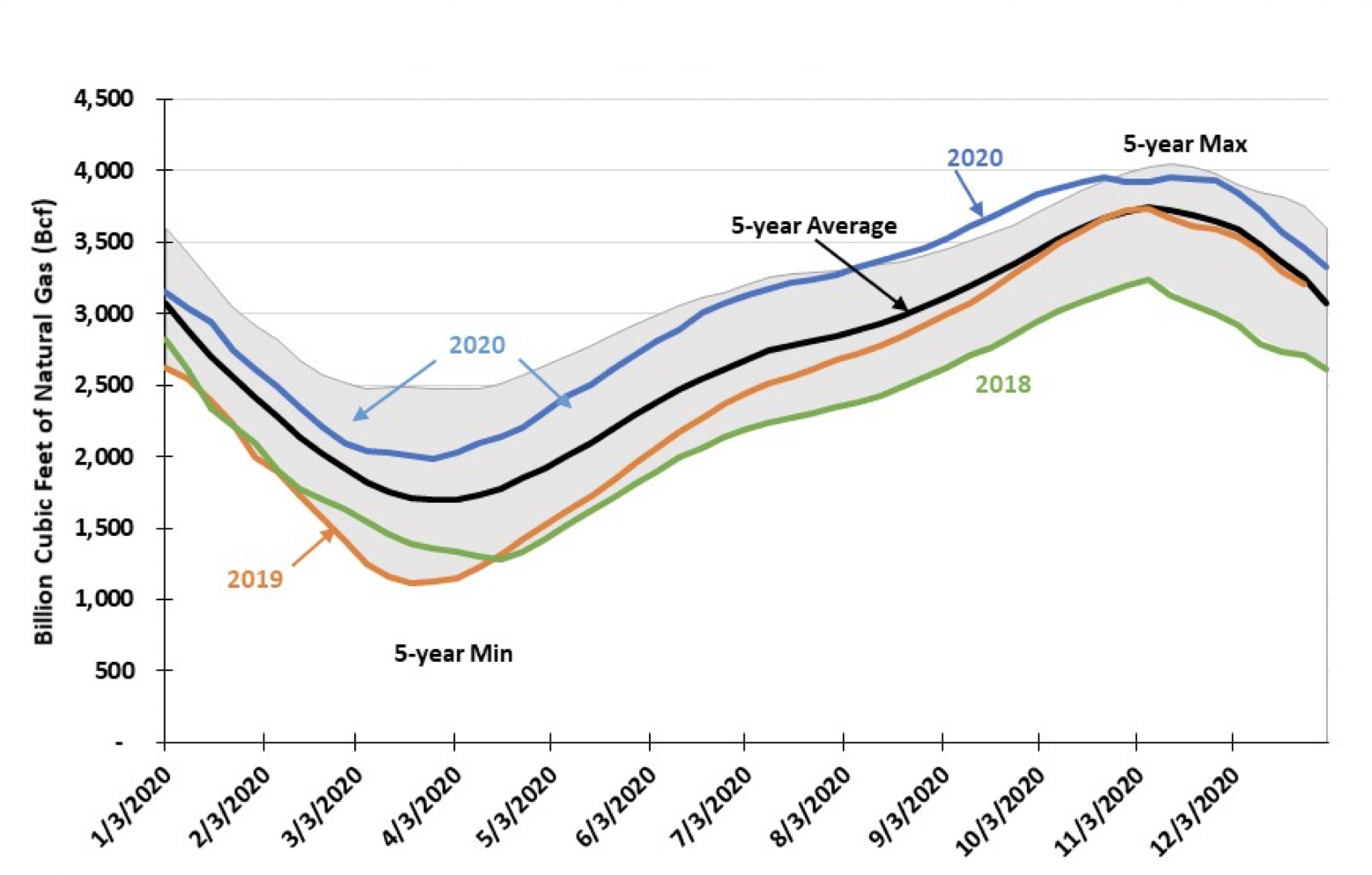 The “I don’t get no respect” natural gas market is struggling to put air back into its deflated bubble. Heading into the winter, optimism grew that fundamentals were rebalancing the market and $3+ per thousand cubic feet gas prices would prevail. With gas supply falling, the storage surplus would soon shrink. Although higher gas prices would result, for LNG exporters, the reality of winter would force Asian and European customers to add to their supplies. An early bout of cold temperatures in the U.S. further encouraged gas suppliers and traders. As we moved toward mid-November, $3/Mcf gas prices arrived.

Then came a wave of warmer weather, coupled with forecasts for more warm temperatures. Early winter weather in northern Asia boosted the JKM gas price to mid double-digit levels, something not seen for over half a decade. LNG cargoes began steaming to Asia. Congestion at the Panama Canal added nearly two weeks to travel times—as much additional time as is necessary to go the long route around Africa. Shipping costs soared, adding as much as $2/Mcf to delivered LNG prices, causing the rise in Asian prices to slow. 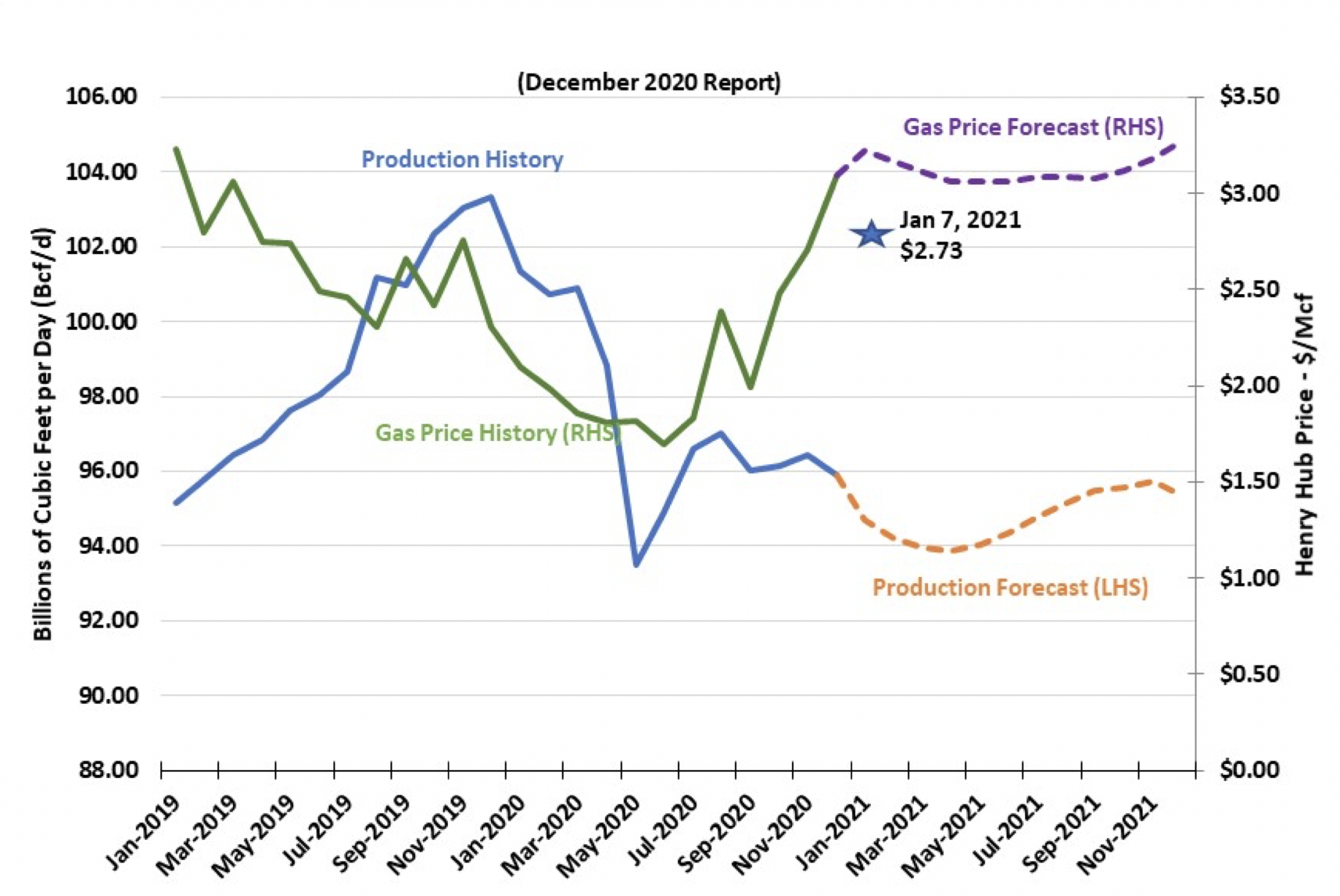 The good news for American gas producers was the recovery of LNG exports, and the start-up of a new terminal, pushing export volumes to record levels. However, the anticipated decline in gas production due to low oil prices (less associated gas output from oil wells) hasn’t occurred. With oil prices ticking up, more associated gas is on the horizon, mitigating the supply/demand rebalancing pace. Suddenly, domestic gas prices were all about weather. Through the end of December, cumulative population-weighted heating degree days were more than 10% lower than for the same period last year. This led to weekly storage withdrawals being worse than the most bearish forecasts, pressuring gas prices. Although November and December are not indicative of an entire winter, the balance of this winter must be substantially colder for gas prices to rise materially.

As markets are wont to do, high Asian LNG prices encouraged supply changes. Southern Asian countries started burning coal for power while shipping their gas north for profits. LNG cargoes destined for Europe were diverted to the more profitable Asian trade. This will help the U.S. LNG business, as Europe draws down its bloated gas storage, eventually making room for new U.S. supplies at higher prices. Unfortunately, the future isn’t helping current gas prices. Although forecasts earlier called for gas prices of well over $3/Mcf in 2021, prices fell below $2.50 with warm weather. A little cool weather has boosted them to $2.70+. However, the gas futures strip barely breaks the $3/Mcf barrier next winter, and then never again. Commodity prices are seldom right, but they reflect perceptions of the future. More importantly, price forecasts influence the actions of the industry’s players. Natural gas is the new Rodney Dangerfield of commodity markets, and thus will be boring for some time.

By G. Allen Brooks | Author, Musings From the Oil Patch