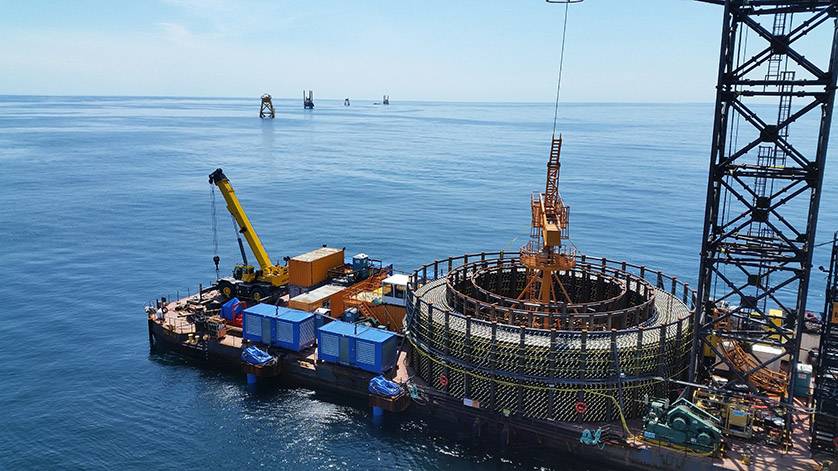 An ocean-going deck barge with a dynamic positioning (DP) system was mobilized for the cable installation. The dynamic positioning system controlled six 500-Hp thrusters and provided precise control of the lay speed, tow tensions, and route. As the cable was uncoiled from a storage tank, it passed through a gantry and a series of linear cable machines. It was then deployed off the stern of the cable lay barge and into the water. The cable descended through the water column into a jet sled that buried the power cable up to 6 ft below the seabed in water depths of 130 ft. The jet sled used surface- supplied water forced through nozzles on the embedment tooth to fluidize a trench for the cable. The jet sled was towed by the DP barge burying the cable the entire route.

Seabed sediments in the Block Island Sound varied between dense sand, clay, cobble, and boulder remnants from the previous glaciation period. The variability of seabed sediments created challenges for the installation.

Minimum operating water depths for the DP system near shore required floating the cable ends from the installation barge into the shore landings. The critical landing on Block Island required the jet sled to be pulled onto the beach and into a cofferdam that helped provide adequate burial of the cable through the surf zone. With the help of an auxiliary barge and land winch, the jet sled was pulled into shore without using the cable lay barge. Divers removed the floatation bags, allowing the cable to sink towards the jet sled as it was winched ashore.

The project also required offshore installation of the wind turbine structures through J-tubes. Prior to cable installation, a bend restrictor was installed into the cable J-tubes and a winch pull-in assembly was installed on the top of the jacket. Once the cable was laid and buried to the structure, it was cut to the desired length and connected to the winch system on the tower. The winch system pulled the cable up the J-tube and into the jacket for termination in the vault room. This was repeated at each of the five wind turbine locations.

For more information on this project, contact Mark Henrikson at mhenrikson@durocher.biz or visit www.kokosingindustrial.com/markets/marine.