November - Geophysical Methods for the Mapping of Deep-Sea Mineral Deposits

Deep ocean seafloor mining systems are being actively developed today for a number of different mineral deposit types. These include seafloor massive sulphides (SMS), poly-metallic nodules (nodules), and ferromanganese cobalt crusts to muds rich in rare earth minerals and deep-sea phosphate deposits. In the deep ocean, geophysical methods are a key exploration tool for finding and delineating these resources. The widest range of geophysical tools have been applied to the mapping of SMS and nodule deposits, and these provide case studies of the methods and instruments applied in the regional mapping, target generation and testing to prospect delineation stages of a deep-sea exploration project.

In 1977, the first black smoker was discovered on East Pacific Rise. Since then, many more hydrothermal vent occurrences have been discovered in the deep ocean worldwide and have been extensively studied by the scientific community. Associated with these vents are SMS deposits formed by the precipitation of metals when hot vent waters cool near the seafloor. These compact deposits can contain very high grades of copper, gold, and zinc and are highly prospective economic sources of these metals.

Polymetallic nodules, sometimes referred to as manganese nodules, are formed on the seafloor. They are extensively distributed worldwide and are most abundant in the oceanic abyssal plains at about 4,800 m depth. First discovered in the 19th century, they weren't considered of economic interest until the 1960s and 1970s when a number of mining consortia explored for them and conducted pilot mining operations to assess the economics of mining them as a manganese, copper, cobalt, and nickel resource. A collapse in world metal prices stopped this work, but considerable design and resource estimation work was done. 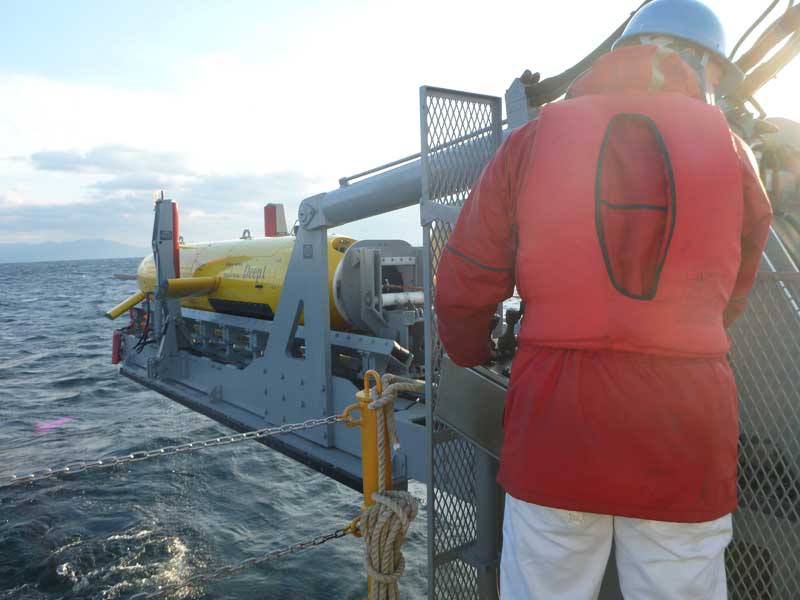 For SMS deposits, active vents form tall chimneys that may be identified by the shadow they cast on side-scan sonar maps. Additionally, towed sleds equipped with water samplers, turbidity, and redox sensors are used to search for active plumes by flying the sled up and down through the water column. Due to the uncertainty in deep-sea current direction and magnitude, data from these sensors combined with the maps produced from the sonars only provide an indication of the general location of the source of active venting. Consequently further mapping is required, to pinpoint the targets, determine the extent of the mineralized system, and determine its economic importance.

Physical sampling with box corers remains the most important part of nodule exploration programs. Geophysics plays an important role as it has been demonstrated that the abundance of nodules can also be measured as a function of backscatter signal from a surface multibeam system and deep water sidescan imagery. Calibrated by the box coring results, this provides valuable information to help target further detailed mapping and sampling.

Target Generation From the ship-borne sonar maps, potential targets for more detailed mapping are defined. A variety of geophysical instruments and platforms are available for use. These instruments not only respond to different physical properties of the local geology, but also target different volumes from the seafloor and the near subsurface downwards to hundreds of meters beneath the seafloor. 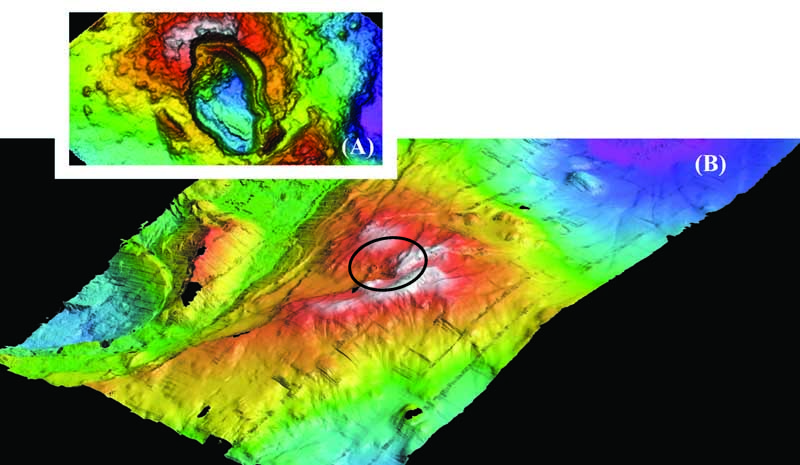 Figure 2: (A) Bathymetry of Desmos Caldera at 25m resolution and (B) 40cm high resolution bathymetry of the SMS deposit Solwara 12 on the SE rim of the caldera. Courtesy of Nautilus Minerals.

Autonomous underwater vehicle (AUV) surveys are often performed over areas of tens of square kilometers to focus exploration. An AUV payload typically includes multibeam, side-scan sonar, subbottom profiler, and chemical sensors. By flying the AUV at low altitudes, sub-meter bathymetric resolution is achieved, enabling the clear delineation of hydrothermal chimneys that are not seen in ship-borne bathymetry. Side-scan sonar and subbottom profilers provide detailed information on seafloor and shallow subsurface geology. For nodules, which are usually 5 to 10 cm in diameter and are often partially buried in sediments, an AUV-mounted multibeam may not provide enough detail to determine the distribution of the nodules with enough resolution. The high spatial resolution of AUV mounted LIDAR and laser profiling systems offer better results for nodule abundance measurements. Note that a trade-off occurs between systems flown higher off the seafloor, which cover more area, and systems flown close to the seafloor, which have high spatial resolution. A carefully designed survey can balance these costs, using high-resolution data to calibrate the response of lower resolution data, which can then be used as a proxy for the high-resolution results.

Magnetometers are also used in AUV-based surveys. SMS deposits can produce characteristic negative magnetic anomalies due to the destruction of magnetic minerals in the hydrothermal alteration halo associated with them. AUVs are an ideal platform for magnetic mapping of these deposits as magnetic data can be collected simultaneously with sonar and water chemistry data. The magnetic anomalies associated with SMS deposits cannot be resolved using ship-borne magnetometers due to the limited extent (typically a square kilometer or less) and the depths of these deposits. Proven methodologies exist to correct magnetometer data for the self-induced heading and attitude errors and the magnetic fields produced by the propulsion and control motors of the AUV, enabling the convenient mounting of fluxgate magnetometers inside the AUV during surveys. The corrected magnetic data then can be inverted to produce 3D maps of subsurface mineralization and structure.

Controlled source electromagnetic (CSEM) systems can also be used to determine the depth extent of exposed SMS deposits and to explore for buried deposits. CSEM systems consist of an electrical transmitter and one or more receivers that are either placed on the seafloor or towed behind the transmitter in a short streamer behind an ROV or towed vehicle. These towed streamer CSEM systems have been used successfully for mapping resistive subsurface gas hydrates. For conductive SMS deposits, the geophysical method used looks for current channelling through the conductive zones, diverting current flow from the ocean into the seabed. The conductivity of the deep ocean is constant, so electrical fields are a proxy for current density. Modeling has shown that SMS targets produce an electrical field anomaly that is readily detectable if using a towed streamer system with short offsets between the transmitter and receivers such as the Scripps Vulcan CSEM. Using 3D inversion of CSEM electrical field data, the subsurface extent of SMS deposits can be determined. 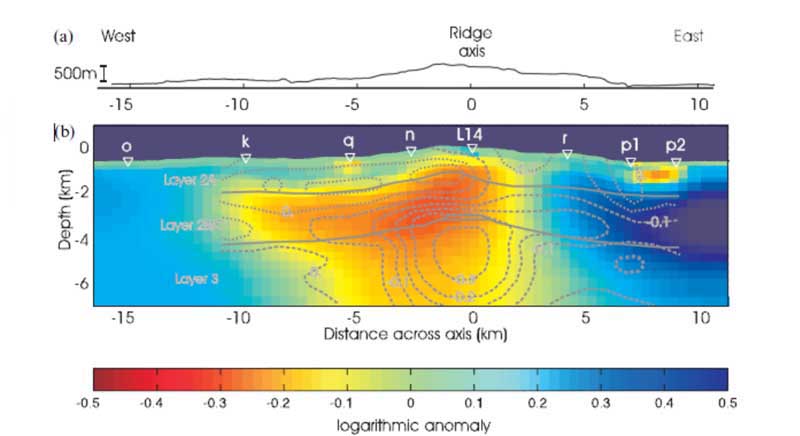 Prospect Delineation Other EM surveying methods can also be used to determine the resistivity of surface and near- subsurface structure. SMS deposits fall into categories: zinc rich and conductive copper gold rich deposits. The OFG-EM system is an ROV-mounted EM system that operates at a height of 3 to 10 m above the seafloor. It comprises a transmitter coil and a set of receiver electrodes close in to the ROV. This system has successfully mapped high-conductive zones that correspond to high grades of copper in surface cores at a number of SMS deposits presently being explored as potential subsea mines. 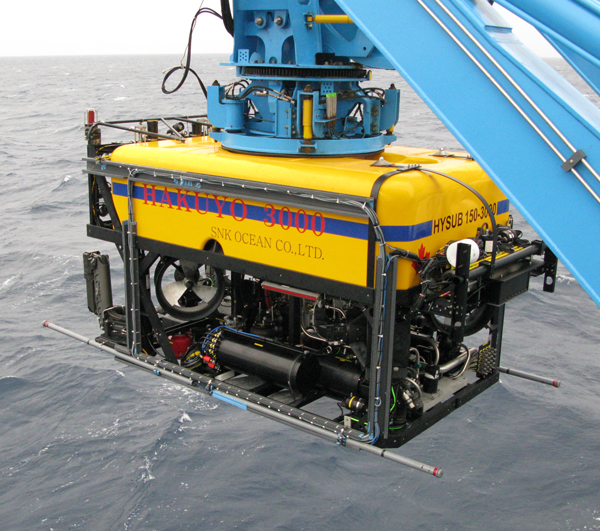 Of all marine geophysical methods, seismic mapping provides the best vertical resolution. In the areas of SMS deposits, reflection seismic provides valuable information on subsurface structure such as buried sulfide mounds, but is difficult to obtain. In deep water, surface multichannel acquisitioncan be problematic because it does not provide adequate lateral nor vertical resolution of these compact deposits. The rugged terrain and active venting in these areas also makes placement of seafloor seismometers difficult. A proven solution is the use of a series of multichannel vertical cable seismic (VCS) arrays moored to the seafloor, such as the system developed by JGI, Japan. These arrays are typically composed of 8 to 12 hydrophones, spaced 10 m apart. In the areas of SMS deposits that cover a square kilometer or less, these arrays are spaced a couple of hundred meters apart. A surface- towed, high-frequency sparker is used as a source, enabling the vertical resolution of layers of less than a meter. A lower frequency air-gun source can be used if mapping deeper structures is required.

Conclusion
The world of marine geophysics is dominated by acoustic methods; however, knowledge of a wider array of geophysical technologies and how to integrate and operate them in surface, towed, and subsea vehicle systems and deployed on the seafloor is vital to the success of any deep-sea mineral exploration program. An effective deep-sea exploration campaign will not only use these technologies, but will stage their deployment in a cost-efficient manner appropriate to the requirements of the project—be it wide area regional prospecting, project area exploration, or resource definition.