Manmade objects made of steel or iron alloys such as a ship’s hull, munitions and pipelines can distort the Earth’s field and are therefore detectable by sensitive magnetometers.

Marine magnetometers are produced commercially by two companies, Marine Magnetics of Markham, Ontario, Canada and Geometrics of San Jose, Califonia, USA. The Marine Magnetics technology is based on a proton precession variant known as Overhauser, which has low power requirements, good absolute accuracy and a sample speed of 1 to 5 Hz. Geometrics produces an optically pumped Cesium Vapor magnetometer that has high sensitivity and high sample speed of 10 to 20 Hz. Marine magnetometers have digital RS-232 data output and provide other measurements such as depth and height above the seafloor.

Magnetometers are routinely used for UXO clearance surveying because explosive projectiles include a steel shell. One of the highest concentrations of UXO is in the coastal waters off the southern UK and Northwestern Europe. Here, WWII bombardment and post-conflict dumping of munitions left large areas of the seabed littered with hazardous material. The munitions include conventional explosives as well as chemical warfare agents.

Today wind turbine farms are being constructed in some of the coastal regions where UXO is encountered. Surveying prospective construction areas of the seabed is helpful in identifying dump locations and also the positions of isolated objects that could pose a risk. Magnetometer arrays have been an important part of these surveys in the last few years. Due to the sheer volume of dumped munitions and the size of the areas where wind farm development is planned, the effort has required the deployment of many dozens of highspeed magnetometer arrays and extensive survey efforts. 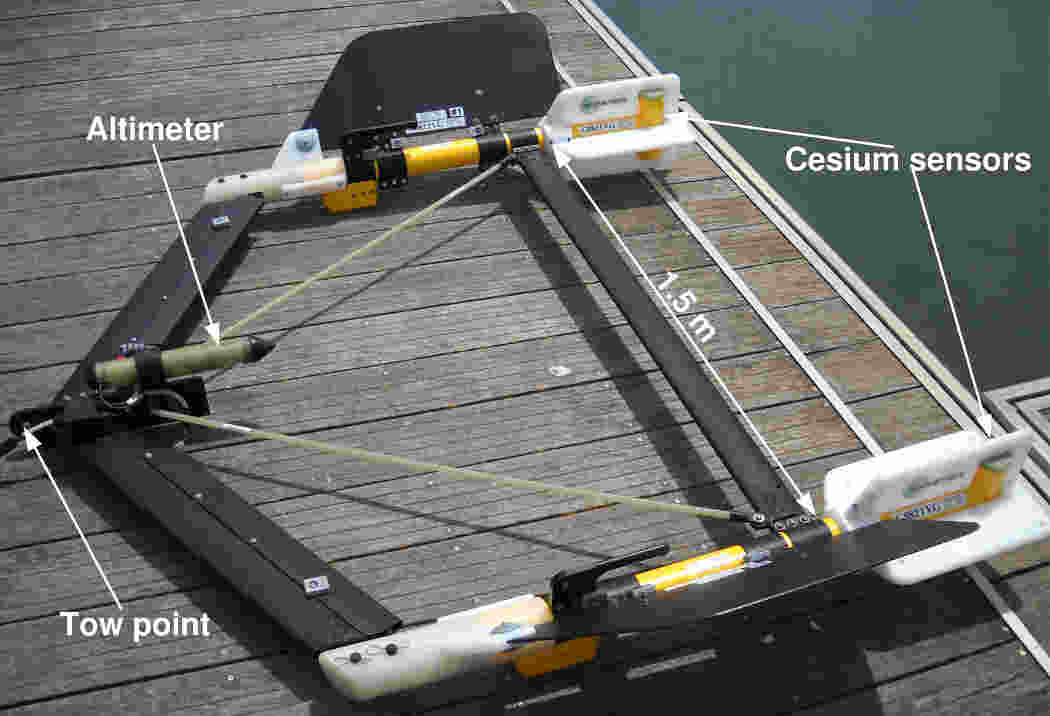 To assist the interpreter, Geometrics Inc. has developed Open-Source software to carry out processing tasks. The software is designed for data collected using transverse arrays of magnetometers that are commonly referred to as Transverse Gradiometers (TVG) or more sophisticated multisensor arrays (Figures 1 and 2). The interpretational stages include the following:

2. Creating Total Field Maps if there is sufficient data density.

4. For each individual profile anomaly a numerical inversion can be carried out using an inversion toolkit [3] to estimate depth, position and magnetic moment of the object, which are an indirect indications of the target’s mass. 5. The results can be presented as worksheets and color “plates” (Figure 4), with magnetic field map, graphs and target parameter information in text format. 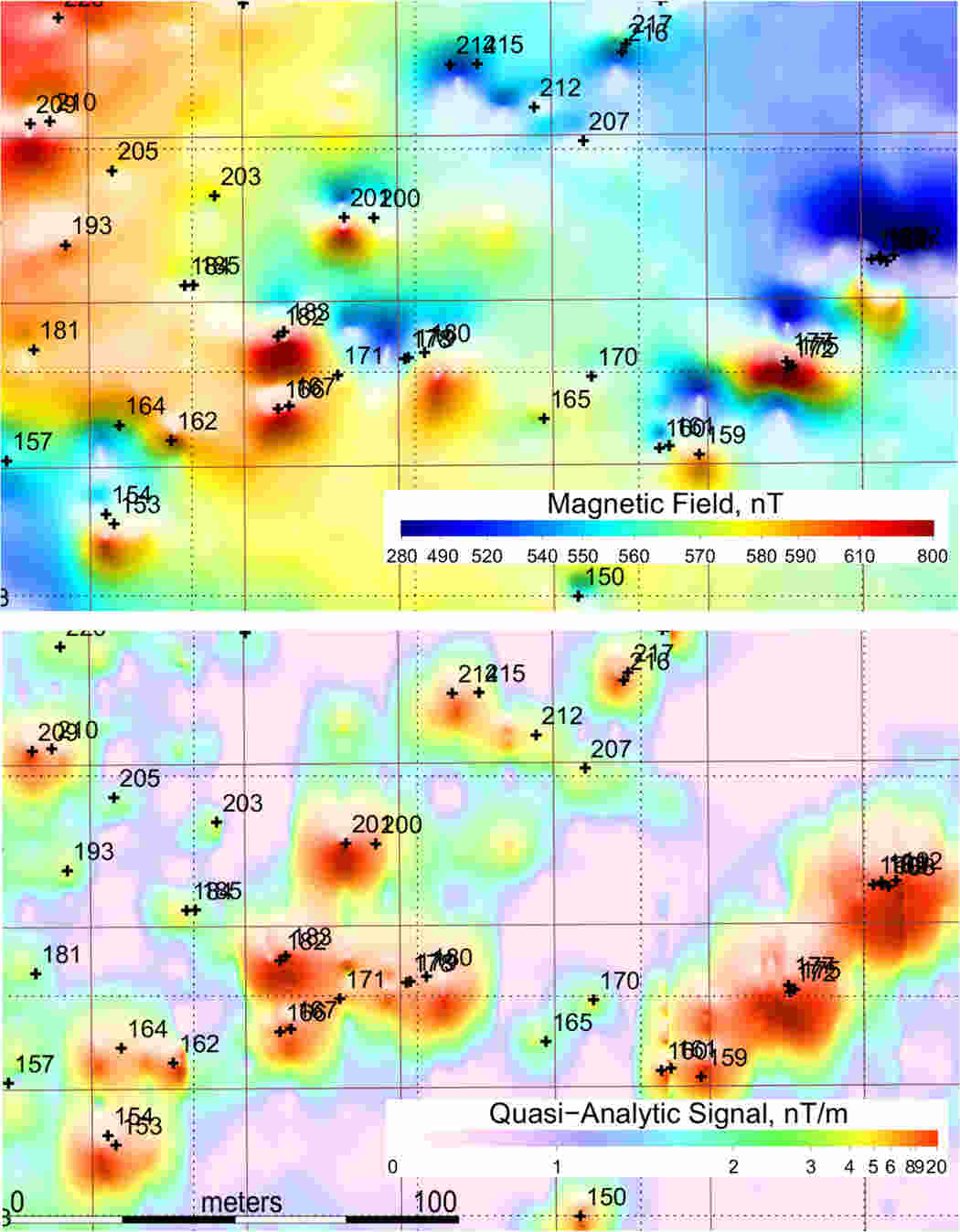 Pipeline locating Buried steel pipelines are another type of structure that may be located by magnetometer surveys, although interpretation of the data can be challenging. Although a pipeline is a simple, uniform object for much of its length, its magnetic field is complex with minimums and maximums interleaved in a seemingly random order. This effect is due to differences in the magnetization along the pipe as well as to the presence of flanges or other structures at the pipeline’s joints. The analytic signal analysis reduces these anomalies to simple, positive bell-shaped features. The depth of the pipeline can be estimated by applying simple half-width rules to the analytic signal. Typical field over the pipeline is shown on Figure 5.

The magnetic field created by a HVDC cable is due the electrical current and not the material properties as in the case of a pipeline. Therefore, the measured field profile is fairly uniform from one survey crossing to another, with two of the TVG sensors reporting almost identical values. One of the cross survey lines, along with results of interpretation, is shown on Figure 6.

The cable itself comprises two parallel conductors, deployed horizontally [7]. It appeared that deviation from horizontal layout could be visible in the magnetic field.

1. UXO. This is the most developed application, with well understood acquisition procedures and processing software. UXO targets are treated as objects that generate a simple magnetic dipole field.

2. Pipelines. Observed anomalies show significant total field variations along the structures. This feature can be reduced to a simpler anomaly signature using the Analytic Signal approach. Half-Width analysis is useful to estimate depth of burial.

3. HVDC cables. This modern type of power transmission has only been minimally investigated. The example survey shows that it should be easy to recognize the power cable by its uniform signature. The initial inversion efforts provide an encouraging result: they show a very good match between the numerically modeled and observed field and realistic burial depth estimates.

All three of the examples can be processed using Geometrics Inc. Open-Source MagPick software. As with any complex software, training is valuable for its effective use. Instructional videos are available from the Geometrics website.

Figure 4. Top part of the automatically generated anomaly page (aka “color plate”) reported as part of UXO survey in Pearl-Harbor. White star shows location of the target under consideration over the part of the Total Field map. The part of the survey profile selected for interpretation is shown in the right, along with the magnetic field modeled as part of the inversion. It can be seen that observed and synthetic fields match almost exactly, which indicates good inversion quality. The plot is created with help of GMT [5]. 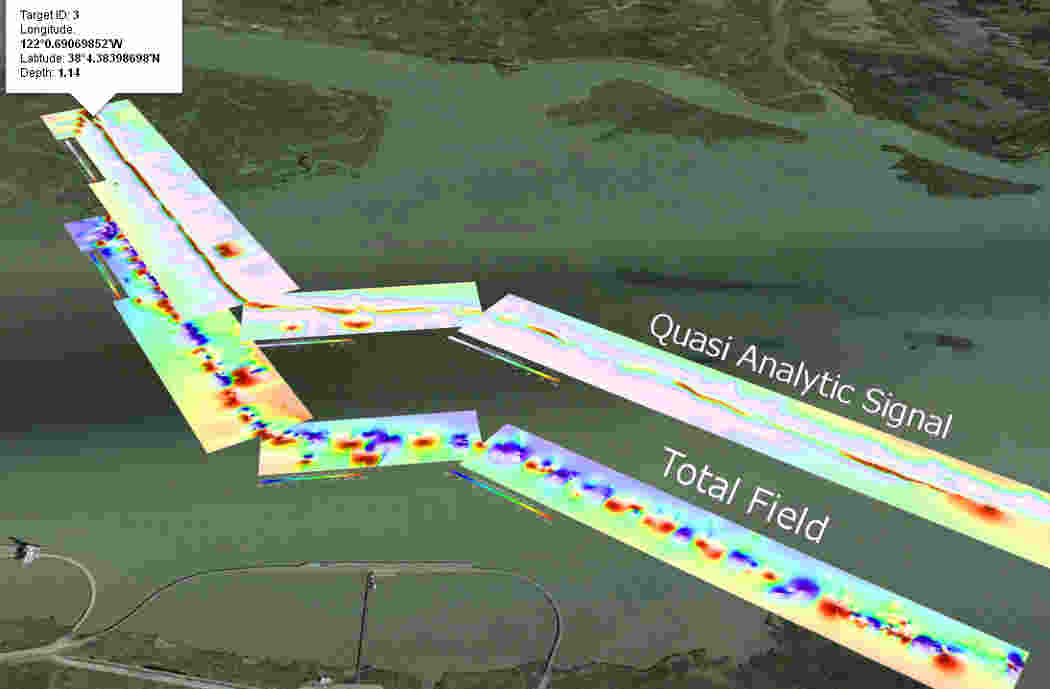 Figure 5. Total Magnetic Field (shown at sea level) and corresponding Analytic Signal (elevated) for gas pipeline near Ryer Island, California. One estimated pipeline location is shown as a balloon. It can be noted that while Total Field signature is very complex, Analytic Signal is greatly simplified. 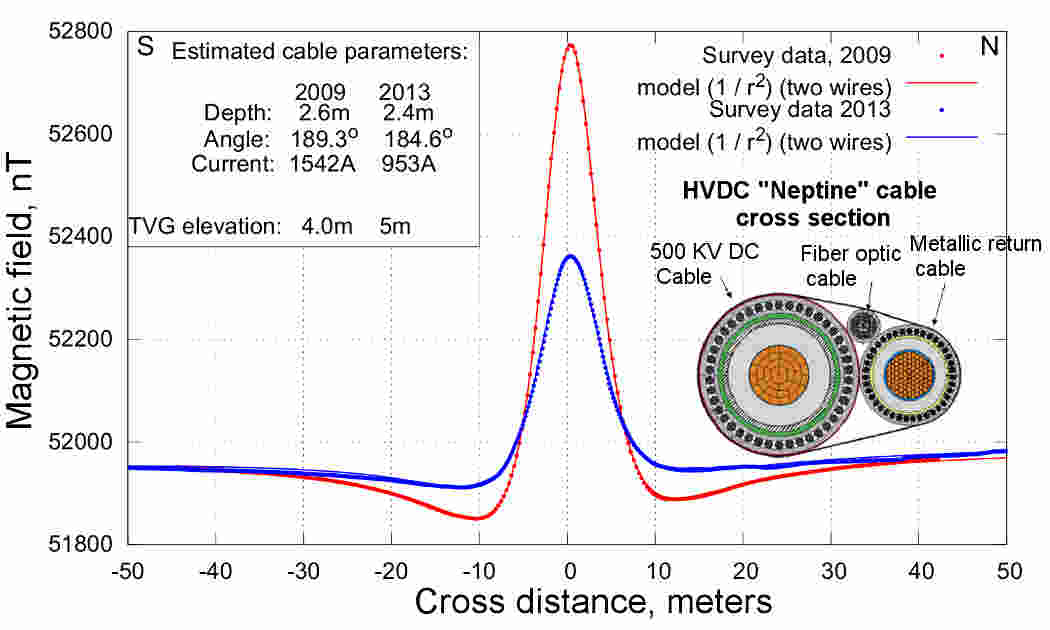 Figure 6. Inversion results for one of the HVDC cable intersections. The dots show actual measured data, the solid line represent synthetic field as result of inversion. The closer the data and model compare, the better the inversion quality. The insert on the right shows cable cross section.

We would like to thank Alpine Ocean Seismic Survey, Inc., New Jersey, for supplying data of HVDC survey over “Neptune” as well as Environmental Solutions, Inc., California, for sharing data over Ryer Island gas pipeline.