In the spring of 2013, the Undersea Voyager Project (UVP) committed to an ambitious proposal to complete a year-long retrofit of its K-250 submersible, ship it via container to Tioman, Malaysia, and perform 36 dives with 33 journalists over the course of 1 week as part of Luminox-Crystal Time’s Save Our Seas Project. The mission: 1) introduce the non-diving community in Asia, through the eyes of their journalists, to the fragile coral reef ecosystem and 2) by showing its beauty and fragility, stress the importance of conservation of this incredible resource. 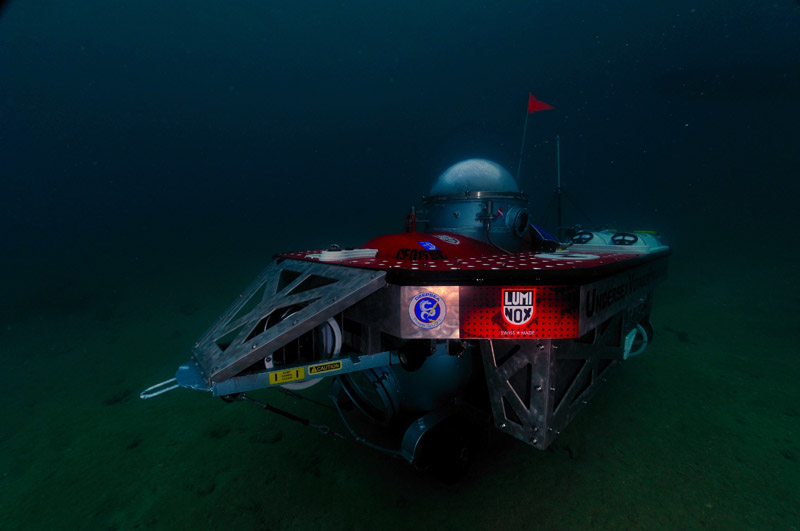 Background
The potential to undertake a project of this magnitude began in 2006, when UVP’s president, Captain Scott Cassell, discovered an old K250 hull rusting in someone’s backyard in southern California. Making a deal to purchase the rusting hulk resulted in an 8-year restoration project. Through the selfless efforts of numerous volunteers with a variety of specialized skills and countless hours invested, the old K250 was transformed into the newly christened “Great White” — UVP’s capable little flagship.

In 2012, after the restored sub made more than 100 dives, it was decided to again transform the Great White into a much more capable research and diver support platform. This redesign would see the sub pulled from service for more than 8 months and, with the promise made to send the sub to Tioman, create a race to the finish to complete the sub in time to undertake the scheduled Asian Undersea Voyage (ASIAUV) mission.

Not your ordinary K-250
The original K250, designed by Kittredge in the 1960s as a small personal submersible, was not a very capable design in terms of providing diver support or performing scientific work. In fact, they did not even have pilot life support basing sub dive duration on pilot estimates of available O2 and the buildup of CO2. However, one of its primary advantages lies in its portability. The K250 is capable of being trailered behind a small SUV and being launched from almost any boat ramp or from the deck of a vessel with a 3,500-lb crane.

In the summer of 2012, a complete redesign of the UVP’s K250 exoskeleton was undertaken by a volunteer technician. Improved propulsion, shifting of air ballast and oxygen supply cylinders to an external location, addition of a diver breathing system, increased ballast capacity, and improved external lighting and camera systems were all goals for the sub’s external structure and systems in addition to the primary goal of improving the K250’s stability in the water. Also included in the redesign was the implementation of a dual CO2 scrubber system and reserve with a 72-hr life support capability and both O2 and CO2 monitoring and a more modern, functional, and comfortable interior. The end result was the creation of a two-person (if you like each other) submersible capable of rapid cycling and hosting two cameras on each quarter bow and one camera on a stern, all providing video images on interior screens to aid in pilot operations. The Great White also has two external life support stations for two divers, including two 50-ft long umbilicals (one on either side in special belowdeck storage) fed by two 150-cu. ft Blue Steel cylinders supporting diver operations in tandem with a sub mission. 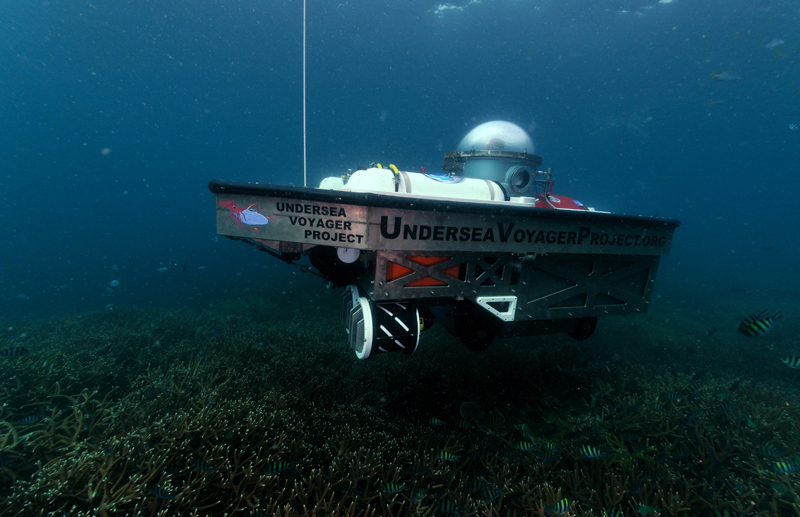 With the departure date for the ASIAUV mission barely a month away, the sub finally underwent its first ballast system test. A failed baffle resulted in another system redesign. But a deeply committed team managed to work for 16 hrs a day nonstop until they completed all systems. On the last available day before shipping the sub to Asia, the team successfully tested the remodeled Great White. Every test was passed with flying colors — from deep tests, maneuverability testing, and emergency procedures (including an uncontrolled emergency ascent). With the sub in full operational condition, it was loaded into the container and shipped to Tioman.

About 30 days later, the sub arrived in Tioman and began what would prove to be an incredible and rewarding mission, the first international one for the Undersea Voyager Project. It would have the UVP/Luminox Team working with dozens of journalists and even engage in dialogue with the King of Brunei.

Project ASIAUV The ‘Save the Seas II’ mission developed by Luminox- Crystal Time and UVP was designed to offer access to the coral reefs and the human effects upon them by media that normally would not be able to see them for themselves. In September 2013 a minimum crew of three traveled to Tioman, Malasyia to meet up with the UVP centerpiece, the submersible Great White.

On the first day of submersible operations, Scott Cassell, Kerry Franciscovich, and the volunteer technician performed three test dives to make certain that 8,000 mi of travel in a shipping container hadn’t harmed any systems on the sub. The sub performed very well within the design parameters even though she proved to be underpowered in a 2.5 to 3 kt current, leading Cassell to survey areas protected from currents. Just off the coast of the resort was a tiny island a mere 300 m away that provided numerous perfect dive sites. The team stowed the sub overnight on a mooring buoy in 10 ft of water just offshore. That night, a powerful storm blew through, crashing 6- ft waves onto the shore rocking the tiny sub in a fury of 45 to 55 mile-anhour winds, so the team took turns watching the sub most of the night fearing for her safety. In the morning, there she was...floating at the dock as if eager to dive. After a brief operations check, she proved to be in perfect operating order.

The dives began in a deeper zone to just over 100 ft deep where there was evidence of plastic pollution along the coral reef. Supported by Franciscovich and the technician, Cassell performed 11 dives on Day 1 with a reporter in the observer station (laying down on the hull deck facing out the 16-in. port) during each dive. Cassell maneuvered the sub around the corals to within mere inches from the front port, allowing the reporters to see the wonders of the coral reef right in front of their eyes. Of course, Cassell had more on his mind than site seeing, so on each dive he also showed the reporters the plastic pollution with the tiny snails crawling all over it. “These snails are grazing the algae growing on this decomposing plastic by using their radula...which is a spike-covered tongue. With the algae scraped up by the radula into the snail are micro particles of plastic...which is in turn eaten by fish, which in turn gets eaten by bigger fish, which then often gets eaten by us. You are watching how plastic enters the ocean food chain and how it enters humans.”

The next day, the weather calmed down and the dive operations were moved to the shallower reef, where Cassell quickly found dead and dying corals victim of coral bleaching. Once again, Cassell showed reporters an healthy ecosystem followed by coral bleaching caused by a warming ocean, invasive algae species suffocating corals caused in part by agricultural runoff, and broken corals from net fishing (even though the area was a protected zone).

Towards the end of the dive day, Cassell noticed that one of the dome-ring clamps was bending downwards more on each dive and he and the technician determined it was from the shipping company using it as an additional anchor-point to secure the sub inside the container. On the last dive of the day, the clamp failed, preventing the dome-ring from creating an air-tight seal and allowing water to trickle into the sub and onto one of the reporters just as the sub began to blow her ballast air to begin the dive. Like a trooper, the reporter laughed it off and even though she lost her chance to dive said she still loved the sub.

That night, Cassell and the technician worked the problem and determined that it could not be fixed in the field, but they did come up with a plan to save the last dive day. Just 2 in. below the dome ring on the front of the hull are two steel tabs used for securing the dome closed during road travel when towed via trailer. They decided that the technician would secure the dome closed from the outside during each dive by clamping a bolt through the tabs and securing it with a wing nut. It worked perfectly.

The following day, the sub made 12 more successful dives with 12 journalists without a hitch. The last day of diving was saved by a $0.50 wing nut.

The magic of this little sub is that she can take reporters, political leaders, and teachers underwater to see face-to-face the beauty of our oceans and the human-caused damages. The ASIAUV media support reached approximately 64 million people in Asia in the form of editorials, newspapers, video blogs, news casts, and magazines. 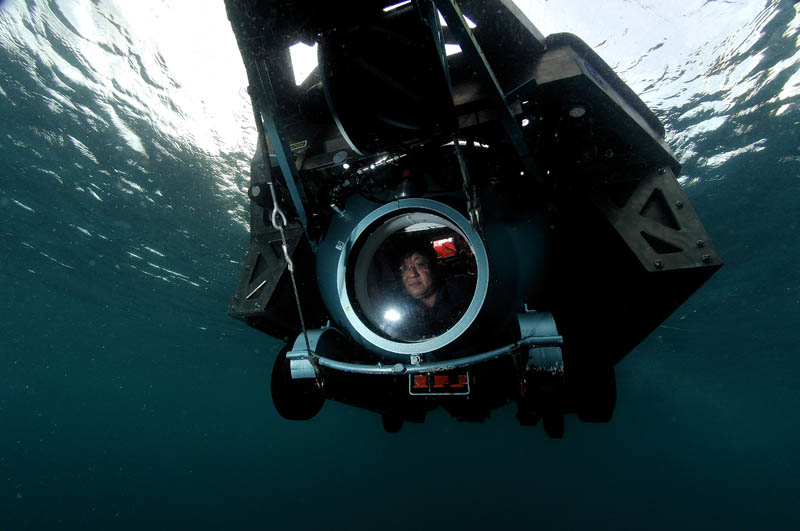 End result: The team successfully performed 33 dives with 33 journalists from nine countries. Not bad when you realize that five volunteers built a non-profit and then a tiny submarine in a garage with very modest donations.

“Someday,” said UVP’s CEO Scott Cassell, “we will get that big donation and be able to buy a submersible that can take paying clients underwater to extend our mission to a much greater audience. We did this mission with a tiny, TINY fraction of what Google spends or NOAA or virtually anyone else and still reached millions of people. Imagine what we could do with the budget of a single Chevron Fuel Station or a single Starbucks Coffee store.” 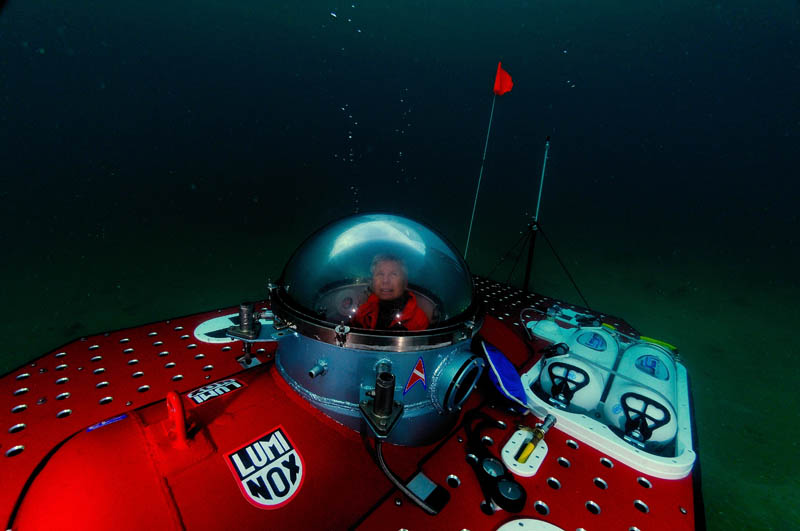 The Undersea Voyager Project
is a non-profit (501-c-3) public-benefit company for Oceanic Research and Educational Outreach. Founded by undersea explorer, Capt. Scott Cassell, the Undersea Voyager Project is designed to utilize manned submersibles to take a physical look at the first 100 to 1,000 ft of seawater (which is the largest environment on Earth) on a continuing series of missions to explore the Earth underwater.

The UVP’s mission is to advance scientific knowledge and our understanding of the oceans’ current condition and mankind’s influence and communicate findings (including its inter-relationship with the global climate, the life within, and discoveries of new life) to a global audience. With the “Youth Ambassador Program.” UVP will inspire children to look to the sea as a career.

UVP is privatizing ocean exploration and science by inviting the public to participate...in other words...everyone is invited! Missions planned for 2015 are to dive the sub with seven gill and great white sharks, explore an underwater forest of still-standing trees that slid into an alpine lake 3,500 years ago and film them, and use the sub as diver support to remove lost drift nets on a shipwreck that are still killing thousands of fish per year...all with donations. Luminox is our only corporate sponsor, and they do more for the oceans than any other watchmaker—something they should be very proud of. We wouldn’t enjoy ASIAUV’s success without them and look forward to future joint missions.