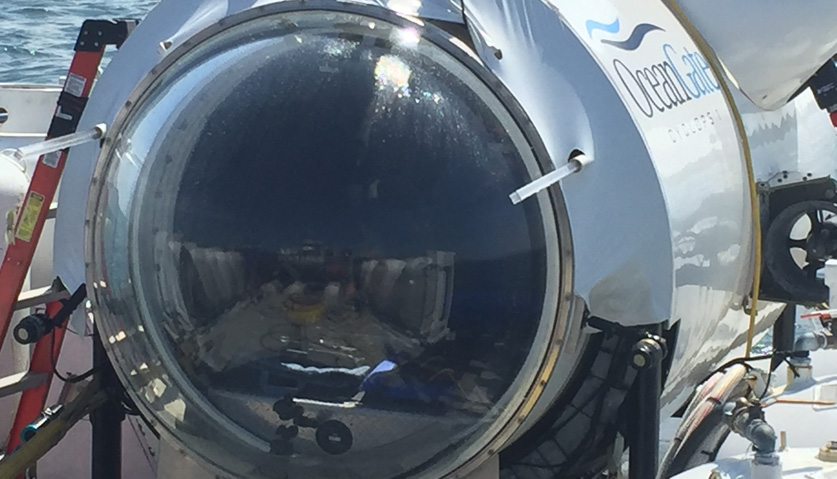 In June 2013, OceanGate committed its flagship submersible Antipodes to a series of dives to showcase the company's ability to operate efficiently through successive cycles of mobilization and deployment. In less than 30 days, OceanGate completed expeditions in three separate bodies of water across the contiguous United States. Each location had specific dive objectives, such as equipment testing, oil platform surveys, and invasive species and habitat monitoring.

The Cyclops 1 was the next submersible built in the series. Its features include an enhanced automated control system to monitor life support, power management, navigation, and other critical system diagnostics. Using a combination of Commercial Off the Shelf (COTS) technology and innovative system architecture designed by the Applied Physics Lab at the University of Washington and OceanGate's internal engineering group, the Cyclops 1 is a fully functional prototype with depth capabilities to 500 m. Cyclops 1 functions as a test platform for software, technology, and equipment to be deployed on the 3,000- m Cyclops 2 submersible, expected to debut commercially in 2017.

In 2016, Cyclops 1 made a historical dive on the famous shipwreck, the Andria Dorea. The Andrea Doria wreckage has been hailed as the Mt. Everest of SCUBA diving due to dangerous conditions, including lines, nets, and strong currents. There have been 16 divers killed on the wreck due to the harsh environment. Sixty years after it sank, OceanGate captured detailed sonar images of the legendary shipwreck for the first time. The company was contracted by Argus Expeditions to provide a manned submersible and a marine operations team on an expedition to survey the iconic wreck. The objective was to capture sonar images of the shipwreck to document its current condition to establish accurate and reliable baseline data so explorers and scientists can better assess the decay of the wreck over time.

Divers have explored the legendary shipwreck for decades, with the first dive occurring within hours of the sinking. These dives have resulted in limited views of the wreck due to the short bottom time available to divers (approx. 20 minutes per dive) and limited visibility.

Since divers can only spend a few minutes at depths of 250 ft and because water turbidity limits visibility to a few dozen feet, it is nearly impossible for divers to capture images of the full scope of this 697-ft long shipwreck. And, as the ship decays, the familiar landmarks that divers once used to navigate around the vessel are changing or disappearing. As a result, there are no images that fully illustrate the scope of the wreck in its current state.

“Five times more people have been to the top of Mt. Everest than have seen the Andrea Doria wreck site, so this expedition was a rare opportunity for our crew—all while expanding our knowledge of the ocean,” said Stockton Rush, OceanGate's chief executive officer.

OceanGate has now started the construction of Cyclops 2, with an order for two titanium hemispheres and two matching titanium to carbon fiber interface rings from Titanium Fabrication Corp. (TiFab), the world's largest fabricator of reactive metals, and an order for a 56-in. Diameter, 100-in. Long carbon fiber main cylinder from Spencer Composites Corporation.

“ Using our five-person submersible, we were able to view the Andrea Doria area for nearly 4 hrs, which is more than 10 times longer than SCUBA divers can.”

The two titanium hemispheres form the ends of the submersible's cylindrical pressure hull that protects five crew members during dives to depths of 4,000 m. The forward hemisphere houses a 21-in. Diameter acrylic viewport—the largest viewport of any submersible capable of these depths. Design and engineering of Cyclops 2 began in 2013.

These two orders begin the construction phase of the project. In parallel, the team is also developing a mobile subsea launch and recovery system for the submersible.

“Construction of Cyclops 2 is a significant milestone in human exploration of the ocean. When completed, it will be the only privately owned submersible in the world that can take five people to these depths. TiFab and Spencer Composites are the ideal choices to fabricate these vital components of our new submersible.

Their depth of experience, quality of work, and ability to produce these large custom shapes with exceptional precision are critical to constructing a manned submersible that can safely dive 2.5 mi deep,” said Rush.

Fabrication of the titanium and carbon fiber components are planned to begin immediately, with delivery scheduled for Spring 2017. When delivered, the hemispheres will be mated to each end of the filamentwound carbon fiber main cylinder that forms the center section of the submersible's pressure hull.

Following assembly of the three main components, the pressure hull will be independently tested to ensure vessel integrity before the final installation of electronics, navigation, and life support systems. Most of these systems to be used on Cyclops 2 are currently in use on Cyclops 1. The first in-water dives for Cyclops 2 are planned for late 2017.