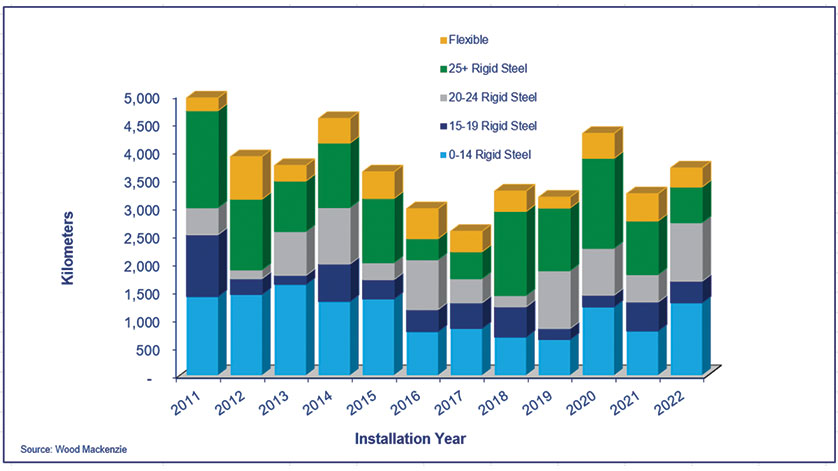 The global deepwater oil and gas market is slowly recovering from the downturn that significantly impacted operations across the deepwater supply chain and affected all those involved, including operators, contractors, and suppliers.

The supply chain has implemented fundamental and structural changes to the way deepwater reserves are developed. Industry players have worked together to reduce cycle time, increase efficiency, and innovate with a common goal of reducing the overall development cost of deepwater projects.

The Upstream Supply Chain group at Wood Mackenzie has been closely following the repercussions of the past two years of depressed deepwater activity. Subsea tree orders, which serve as a leading indicator for deepwater installation activity, have seen a small but positive step in the right direction in the first half of 2017, booking more than 80% of total 2016 demand. While we do not expect this level of award momentum to continue throughout 2017, it does indicate some positive movement within the market. As such, with pipeline installations having a lag time from the subsea market, 2017 is expected to experience the bottom of the trough in deepwater pipeline installation activity, with recovery expected to begin in 2018.

The pipeline recovery is attributed to increased transmission line and export pipeline activity, which is disconnected from previous demand profiles. Previous transmission activity has been unpredictable and difficult to forecast, with geopolitical issues and economic sanctions playing a large part in the approval of these long transmission lines. Installation work on Gazprom's TurkStream pipeline finally commenced in June, after many reiterations of the pipeline route and legal issues following the termination of the installation contract with Saipem for the South Stream pipeline. Allseas won the new contract, and Pioneering Spirit, Audacia, and Tog Mor will undertake installation of the project’s two transmission lines, totaling 1,800 km of our pipeline forecast. The Sur Texas-Tuxpan transmission line and the Johan Sverdrup oil export pipeline are also expected to be large contributors to recovery, beginning in 2018.

World pipeline demand decreased in 2017 and will begin to recover in 2018. Pipeline demand had declined steadily since 2015 as project start-ups were pushed back due to operators trying to conserve cash flow and lower project development costs. Next year is expected to see an increase in the +25-in. pipeline diameter category with the planned installation of the TurkStream pipeline and Johan Sverdrup oil export pipeline. Iran Oman India Gas Pipeline is the main contributor to the 20-in. to 24-in. increase in the forecast period beginning in 2019. 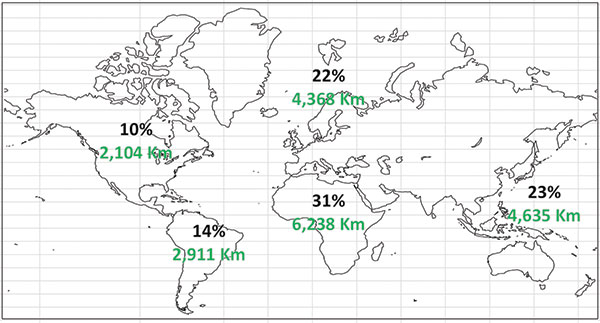 North Africa is expected to be the largest demand source for the Africa/Mediterranean region, apart from the traditional hot spots of Nigeria and Angola. The trend toward geographic diversity in pipeline installation will continue throughout the forecast period. However, frontier areas in general are especially at risk due to lower oil prices, which should lead to lower than expected growth in regions such as East Africa. Despite the downturn, African installations have steadily been growing since 2013. Installations for Total's Kaombo Phase 1, BP's Shah Deniz Phase 2, ENI's Zohr project, Gazprom's TurkStream Pipeline project, and BP's Trans Adriatic Pipeline project contribute to increased installation activity in 2017.

After a strong five years, led by the install of new ultra-deepwater hubs, the Gulf of Mexico is expected to see a trough in installation activity this year before picking back up in 2018. The forecast installation demand is largely composed of pipeline infrastructure for developments such as BP’s Mad Dog Phase 2, Shell's Appomattox and Vito, and Pemex's Lakach. This is a function of both the depressed overall market as well as cyclicality in the region due to the installation of large exports for new hubs in undeveloped areas. Smaller subsea tieback activity is the current driver for the Gulf; however, the Sur Texas-Tuxpan transmission line installation in shallow waters south of the U.S. border will provide some offset activity on a pure-kilometer basis in 2018 and 2019, contributing to the large increase in the +25-in. diameter pipeline category. 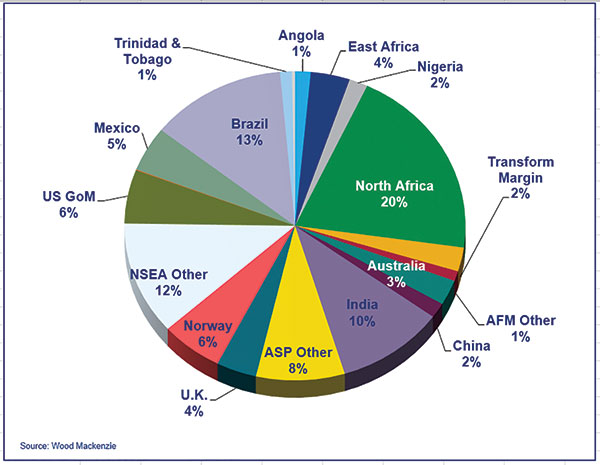 Malaysia, Indonesia, India, and other Southeast Asian countries have surpassed Australia to become the leading demand source in the Asia-Pacific region. Australia is projected to account for only 11% of the 4,635 km of pipelines projected to be installed in the region between 2017 and 2022. India will account for the majority of demand (45% of the total), and Malaysia, Indonesia, and other Southeast Asian countries accounting for 37% of the total Asia-Pacific forecast demand activity. The main contributors to the growth of India demand is South Asia Gas Enterprise’s Iran-Oman-India Gas trunkline, ONGC's KG-DWN-98 Cluster, and Reliance Industries’ KG-D6 Extension R series Cluster project. Negotiations have resumed for the Iran-Oman-India Gas trunkline, with the planned pipeline running from the Iranian coast via the Oman Sea and Indian Ocean to Gujarat. It is expected to be built in two years, from the date the necessary approvals and a gas sale and purchase agreement are signed.

The North Sea has seen low levels of installation activity in 2016 and 2017, but is expected to recover in 2018. The West of Shetlands, Baltic, and Barents Sea activity provides an upside within the forecast in addition to contributions from the more traditional UK and Norwegian North Sea areas. Statoil's Johan Sverdrup project will contribute to the recovery in 2018 and has awarded marine contractors Saipem, Technip, and Ocean Installer sections of the SURF package. The contributors of the significant increase in the +25-in. diameter category for the latter part of the forecast is the Nord Stream 2, which will be installed by Allseas' Pioneering Spirit and Solitaire.

While the low oil price environment is prompting operators to delay award activity and fine-tune prospective installation work scopes to reduce costs, there have been several SURF and EPIC (engineering, procurement, construction, installation and commissioning) contracts awarded in the first half of 2017. In the Gulf of Mexico, BP awarded Subsea 7 the SURF installation package for Mad Dog South Phase 2 and Shell awarded TechnipFMC and the SURF installation award for Kaikias. In the Africa/Mediterranean region, ENI awarded TechnipFMC an EPCIC for Coral South FLNG project and Allseas was awarded the installation contract for the second string of the TurkStream pipeline project. Subsea 7 was awarded an installation contract for Cooper Energy's Sole Vic project in Australia, and Saipem was awarded ExxonMobil's Liza project in Guyana.

Although installation levels have seen multi-year lows as contractors have executed previously awarded backlog and less incoming work replaces it, Wood Mackenzie projects improvement in the offshore pipeline installation market beginning in 2018. This will be driven by transmission line and export pipeline installation activity, improvements in market conditions, and increased tendering. Operators are working to increase efficiencies in their projects while suppliers and contractors work together to provide cost-saving subsea solutions. This collaborative effort across the deepwater industry will be a significant driver to how strong we move out of this downturn into the next upcycle.

The analysis and insight provided in this piece are from our recently launched global upstream supply chain research team. Through acquisitions of Infield Systems and the Quest Offshore data & subscriptions business, Wood Mackenzie has created a strong, industry-leading foundation on which to build the comprehensive suite of upstream supply chain solutions and costs.