GRI Simulations Inc. (GRI) is a software development company focused on real-time simulation, modeling, and visualization for critical marine activities. In 1997, GRI began development of an Remotely Operated Vehicle (ROV) Pilot Training simulator and, in 1999, released the VROV (Virtual ROV) System: Pilot Training. Due to its innovation in interactive tether collision and dynamics, the system became the leading technology in its field. A few years later, the release of VROV Mission Planning and Rehearsal was another watershed in simulation with the introduction of complex manipulator interaction to complement the unrivaled tether dynamics. Over time, VROV was integrated with the leading ROV systems and subsystems, while advanced capabilities such as multiple- ROV missions, cable cutting, complex rigging, and installation missions kept VROV on the leading edge. GRI’s commitment to optimization and continuous improvement has enabled it to build the most advanced, realistic, and functional simulator system to make true high-fidelity mission planning and rehearsal not only possible but efficient. 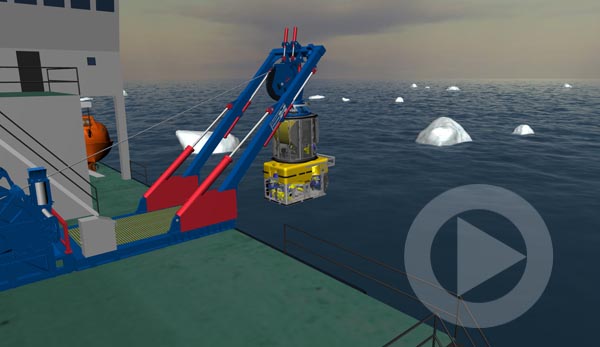 Making a Splash
Recent R&D projects with customers and partners indicated the immediate need for high-fidelity hydrodynamics in the upper water column or splash zone. The project involved two ROVs with hull crawling capability and a range of specialty equipment that had to operate effectively in the high dynamic zone near the surface under variable conditions.

The success of this project demonstrated the potential for serious simulation of Autonomous Underwater Vehicle (AUV) and ROV Launch and Recovery Systems (LARS) for design testing and operations training. This culminated in the commercial release of stand-alone Hawboldt Industries LARS simulation systems at the Launch and Recovery 2014 conference in Linthicum, MD on 19-20 November 2014; and GRI's LARS and ROV simulators integrated with Ships Bridge and DP simulators from Transas Marine at The Workboat Show in New Orleans 3-5 December 2014. If you didn't make it by to say hello, check our Twitter feed and website news links to take a look. 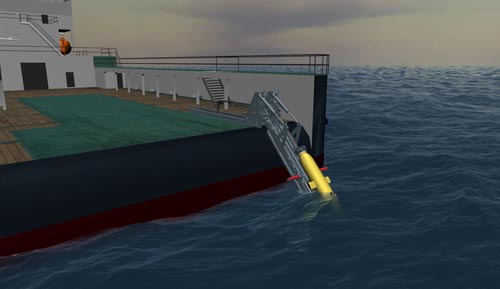 In an earlier spotlight, GRI made an appeal for technologies and projects to integrate and demonstrate with the enhanced VROV dynamics and Interactive Design and Engineering Analysis Field Development Kit (IDEA FDK). This was received very well and resulted in many successful collaborations over the past year. There were numerous Electronic System Integration Test (ESIT) projects whereby the equipment and procedures of engineering solutions were demonstrated and verified using the high-fidelity VROV simulation platform.

Well control and Sim-Ops content, as well as seismic data visualization, highlight the new advances in the global commercial release of the IDEA FDK in Q1 2015. The IDEA FDK is also being used to support career development of new subsea engineers and those studying subsea engineering at the university level.

GRI is building on its previous success in Brazil with the help of Underwater ROV Training (andre@underwaterrovtraining. com.br). Starting in 2015, they will demonstrate and support a range of GRI products and services for the oil and gas sector. Other innovative enterprises and agencies are encouraged to consider VROV and the IDEA FDK as a way to further develop their maritime or subsea technologies. For more information, visit www.grisim.com.