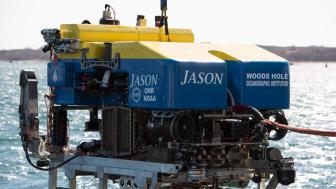 A major, $2.4 million upgrade funded by the National Science Foundation (NSF) has made the remotely operated vehicle (ROV) Jason more capable than ever. This 12-month-long project, conducted by engineers at Woods Hole Oceanographic Institution (WHOI), which designed and built the vehicle, has increased the vehicle payload and range of activities and streamlined the vehicle operation.

This is Jason’s first upgrade of this magnitude since its second-generation launch in 2002. The original Jason was launched in 1988. The ROV is operated by WHOI for the nation’s ocean scientists as part of the National Deep Submergence Facility (NDSF).

“This upgrade enabled us to increase the system’s lift capability from 400 pounds to 2 tons of scientific samples and instruments from the seafloor, and to eliminate its companion vehicle, Medea, for these operations,” said Matt Heintz, a WHOI senior engineer and Jason program manager.

Until this latest upgrade, Jason has been operated as a two-body system in concert with Medea, a smaller ROV that buffered Jason from the movement of the surface ship while providing lighting for its seafloor activities. Now, Jason can be de-coupled from Medea and operated as a single-body system, streamlining its launch and recovery and making the vehicle more versatile.

During a Jason mission, the ROV pilot, navigator and engineer operate the vehicle from a control van on the ship’s deck while Jason sends HD video in real time from the seafloor through its cable tether. Scientists in the control van observe and direct biological and geological sampling to ensure their scientific mission is accomplished.

A key reason behind the upgrade was to enable Jason to perform maintenance to seafloor infrastructure related to the NSF-funded Ocean Observatories Initiative and Ocean Networks Canada’s cabled observatories efficiently and with reduced need for deck space.

“NSF is pleased to support innovative enhancements to Jason that will increase the ability to service major infrastructure in the oceans, as well as improve the already impressive support Jason provides as the ‘workhorse’ ROV for the oceanographic research community,” said NSF Ocean Sciences Division Director Rick Murray.

But the upgrade has other added benefits as well. The heavy lift capability will be used at seafloor sites where several-hundred-meters-long sensor strings are routinely deployed into and recovered from seafloor bore holes. It also will deploy and recover trawl resistant instrument packages.

“Traditionally we lift these under Medea – a time consuming technique, which also subjects the vehicle packages to vessel motion,” said Heintz. “With our Active Heave Compensated (AHC) winch and cable direct to Jason, these operations will be far less challenging and much faster.”

Medea will still be used for scientific missions requiring depths greater than 4500 meters, and on vessels equipped with cable strong enough to eliminate the need to install the new larger winch and cable system.

While the upgrade was specifically intended to increase Jason’s ability to deploy and recover scientific packages, it was also an opportunity for engineers to redesign numerous systems to increase general scientific capabilities and to improve maintenance capabilities, which will result in less down time.

The core components of the upgrade include:
• New bigger and stronger cable tether with break strength (BS) of 70,000 lb. compared to the traditional cable tether with a BS of 42,000 lb.
• A modified Active Heave Compensated winch to accommodate the new cable
• A new Launch and Recovery System (LARS) to accommodate the increased payload rated to 15,000 lb.
• A new vehicle frame capable of withstanding the increased loads
• A new swappable heavy lift tool skid that will be used for these lift operations
• New science tool skid with increased space and payload for scientific equipment
• Additional flotation to accommodate the increase in weight of the new frame.

The engineering effort began in April 2015, and culminated in a complete overhaul, stripping the ROV down to its base, replacing the vehicle frame and improving system functions, which required three months.

Since its original launch in 1988, ROV Jason has spent countless hours exploring the Earth’s oceans, taking samples and imaging the sea floor. Perhaps nothing was quite as dramatic as the 2009 observation of the West Mata volcano erupting at 1,100 meters’ depth in the Pacific. Through its fiber optic tether, Jason was able to transmit HD video of the explosive erupting volcano and its molten lava in real-time to stunned scientists and crew onboard the ship.

With significant enhancements to its design and capabilities complete, Jason will expand its range of operations to meet the changing needs of the ocean science community, which increasingly involves seafloor-based ocean observing infrastructure. Jason begins its first post-upgrade science mission in June 2016 aboard the SIKULIAQ, a ship owned by NSF and operated by the Univ. of Alaska, and has a full science schedule into 2017.