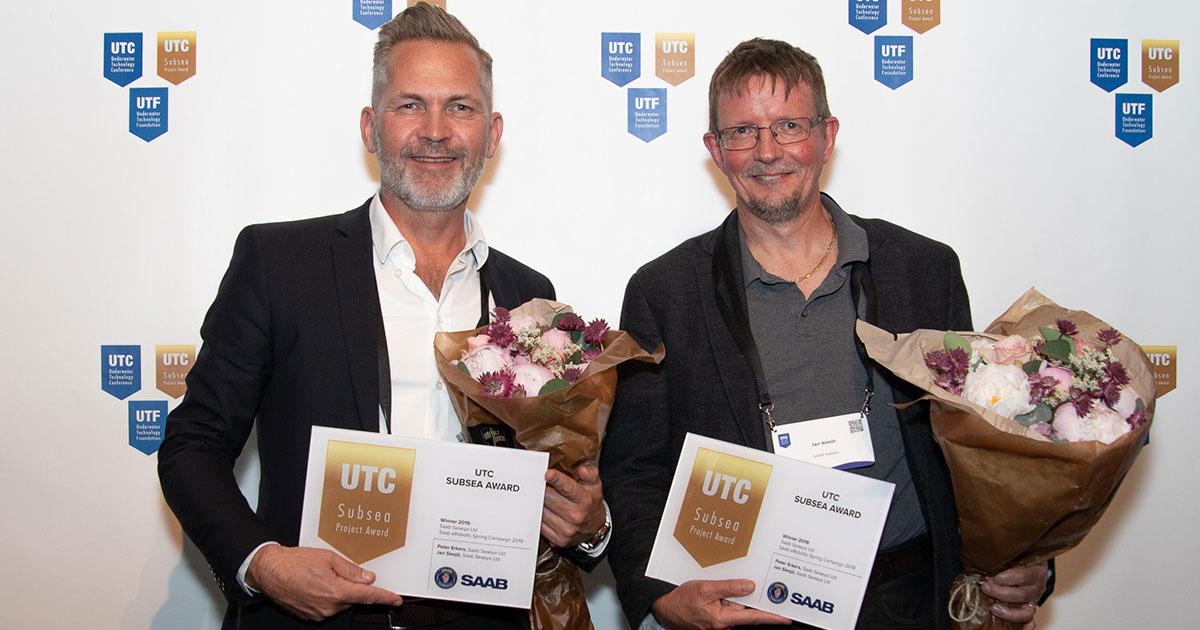 They achieved a world first by proving the potential for marine autonomous systems to take a greater role in underwater inspection, repair and maintenance methodologies.

The 2019 award was presented to representatives of the Swedish team at Saab Seaeye, Jan Siesjö, Chief Engineer, and Peter Erkers, Sales Director, at the Underwater Technology Conference (UTC) in Bergen.

“It has been a long journey,” said Siesjö. “Ten years ago, no one was listening and the market was not mature enough. One of the biggest drivers has been ENI, who have been pursuing technologies with autonomous behaviour characteristics around subsea infrastructure on the seafloor with wireless communication.”

Jan Siesjö explains that having a subsea vehicle based at a subsea docking station ready to be launched on pre-programmed or man-controlled missions, including inspection, repair and maintenance, research tasks and environmental monitoring, no matter what the weather and without the need for surface vessel support, reduces costs, carbon emissions and risk to humans and increases operational availability.

Now, thanks to development projects with Italian operator ENI, he says, as well as parallel developments in inductive underwater charging and data transmission technology, along with 4G connectivity across the North Sea and other basins, and the development of standardised docking stations, the market is catching up with the concept.

Peter Erkers further explains that the advance is only possible because of the advanced technological capability of the Sabertooth and its manoeuvrability, stability and ability to work in tough and challenging environments.

“It is the only hovering autonomous system that can operate in both AUV and ROV modes and handle connections in both the horizontal and vertical plane,” he says, “and the only vehicle currently on the market capable of undertaking long-term residency in difficult to access locations.”

Separately, Saab Seaeye is working with Ocean Power Technologies to jointly develop and market solutions for AUV and ROV charging and communications systems, using a buoy-based wave energy generator for power and communications.

Their Sabertooth is also being used by ENI to trial a wave power buoy and demonstrate the ability to charge subsea vehicles.

Later this year, a Sabertooth, adapted by Modus Seabed Intervention, based in England, will also be demonstrated as a resident vehicle on a UK offshore wind farm.

Hans-Erik Berge, chair of the Underwater Technology Foundation (UTF) board says, “Subsea resident vehicles able to remain on the seabed for long periods, available for inspection and maintenance operations 24/7, aligns with industry efforts to reduce costs, risk and carbon emissions. We congratulate Saab Seaeye for their achievement and we also recognise the work being done by Equinor and NTNU, to create a vehicle agnostic standardised docking stations available at a test facility for all vehicle vendors to use for testing.”