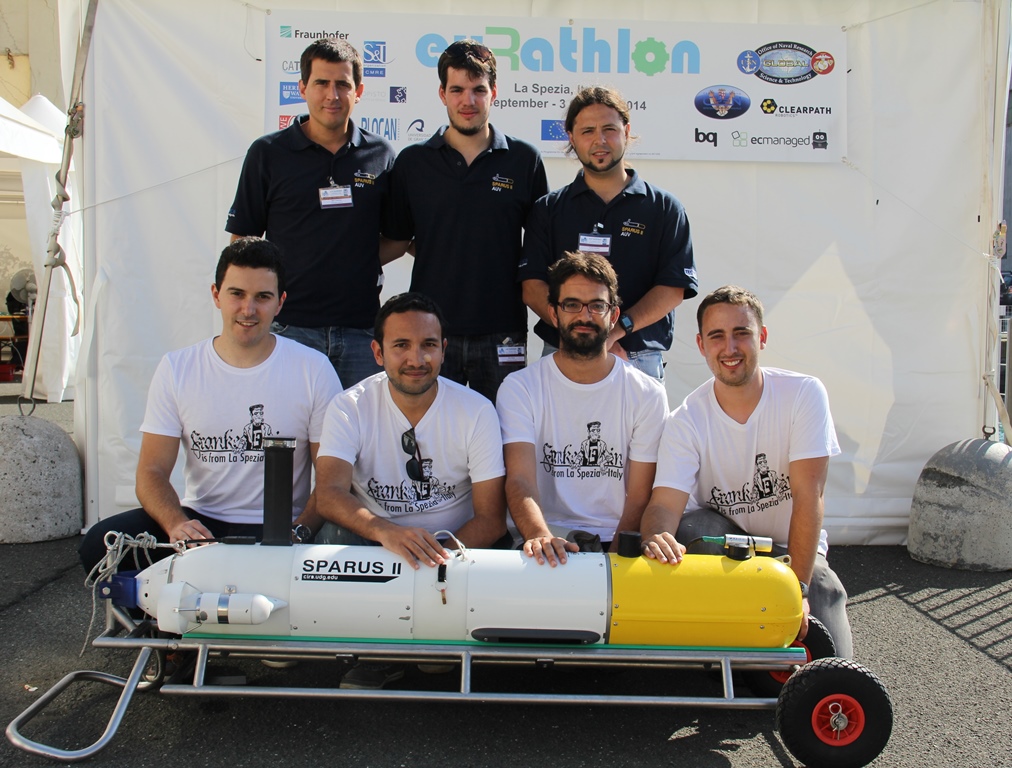 The NATO Centre for Maritime Research and Experimentation (CMRE) has just concluded two intense weeks of student challenges with a multi-domain demonstration.

After the Student Autonomous Underwater Vehicle Challenge - Europe (SAUC-E), hosted for the fifth year in a row in CMRE’s sheltered harbour, from 20 to 26 September, the first euRathlon sea robotic competition was held in the same venue from 29 September to 3 October.

The competition consisted of five different marine scenarios: “Long range autonomous underwater navigation”, “Environmental survey of the accident area”, “Leak localisation and structure inspection”, “Interaction with underwater structures” and a “Combined scenario”, any of which could have led to a winner. Teams and their robot vehicles had the possibility to compete in one or more scenarios. SPARUS II robots were loaned to participant teams with poor expertise in the marine domain in order to help them better facing the underwater challenges. Thanks to this facilitation, two teams (Robdos and Scuola Superiore Sant’Anna) without any experience in the field successfully competed.

Vicorob by the University of Girona won four out of five scenarios. Only in the “Environmental survey of the accident area” one Vicorob won the 2nd prize jointly with SAUC-ISSE from ENSTA Bretagne. This scenario was dominated by DFKI GmbH-University of Bremen team (Germany) with the robot Avalon.

"We are excited by the results of both SAUC-E and euRathlon competitions ", says Gabriele Ferri, the Technical Director of these two events at CMRE."We had different teams capable of conducting complex tasks showing us an improvement in the overall team performance during previous years in SAUC-E. Furthermore, two teams were successful in adopting cooperative strategies. We are happy about that since we believe that realizing smart cooperative robots will be the great challenge for research in future years". Teams were fostered to test multi-vehicle collaboration in order to improve precise sonar based navigation, data processing and mission reporting in real time, during the contest’s missions. In euRathlon, in particular, the cooperation between an underwater and surface vehicle was even more emphasized and encouraged. Furthermore, in order to simulate a realistic situation, an operator was able to communicate with the underwater vehicle by using acoustic communication. Finally, for the first time at CMRE, euRathlon ’14 introduced tasks involving underwater manipulation, which is a really promising area of research. The euRathlon project is a three-year effort, funded by the European Commission, where robots and their teams of designers go head-to-head in a series of demanding outdoor scenarios that mock the real challenges of a disaster situation.The overall scenarios have been designed to lead up to the Grand Challenge, the final euRathlon event which in 2015 will feature all three elements (land, sea and air) to respond to a mock disaster scenario inspired by the Fukushima accident.