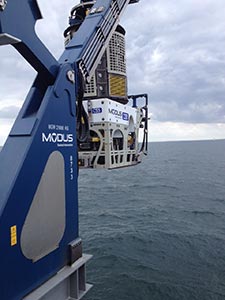 The workscope has been divided into two packages – an initial investigation survey of known ferromagnetic UXO (Unexploded Ordinance) targets to identify any explosive ordnance within the site, followed if required by an Explosive Ordnance Disposal (EOD) operation to dispose of all positively identified EO. To deliver this project, Modus will be working with subcontractors N-Sea (Survey specialist) and Ramora (ordnance specialist). The project will utilize the DPII DSV Noordhoek Pathfinder, equipped with Modus CSROV, as well as N-Sea’s Aberlour to support diving operations.

DONG Energy's appointment of Darlington-based Modus to provide unexploded ordinance investigation and disposal services on this high profile project, is an acknowledgement of the region’s strong supply chain and affirms the company's position as a leading subsea specialist in the important wind farm sector. Nigel Ward, Commercial Director of Modus Seabed Intervention, said: "This is a major contract to have secured and we are delighted to be working with DONG Energy on such an important UK Offshore Windfarm Project, and we look forward to completing another safe and efficient service with our key partners."

"The contract also demonstrates DONG Energy’s commitment to working with UK contractors in the construction of these strategic wind farms. Modus’ position on the development is not only a reflection of our growing status in the wind farm sector, but it also strengthens us for future growth as we continue to invest in the latest subsea technology."