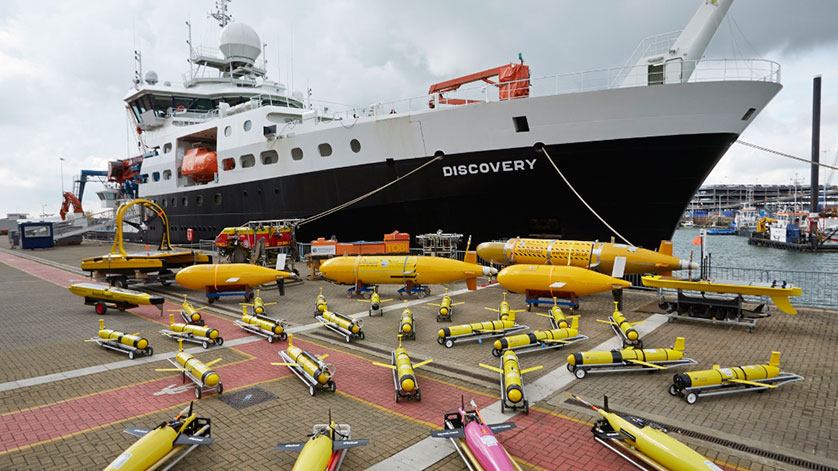 The UK government last week announced an investment of over £19 million into NOC platforms and sensor development through the Industrial Strategy Challenge Fund (ISCF).

The investment in marine robotics, which is known as the ‘Oceanids’ programme, will see NOC engineers develop two new autonomous underwater vehicles: a 1500 m depth-rated Autosub Long Range (ALR1500), that will join the "Boaty McBoatface" family of long-endurance unmanned submarines, and a 2000m depth-rated vehicle capable of carrying high-power sensors and venturing under ice (Autosub2000-UI). The Oceanids team will also develop new command-and-control systems for efficient Marine Autonomous Systems (MAS) fleet management, co-ordinate demanding sea trials for the new vehicles and sensors to ensure they are ready for science and operational use, and build an enhanced MAS control room in the Marine Robotics Innovation Centre based at the NOC in Southampton.

Oceanids SRO, Julie Pringle-Stewart said: “The NOC will be seeking to add value by ensuring the funding for this disruptive technology innovation is translated into industry, by working in partnership through our existing innovation centre partners and associates and wider. Oceanids will help us strengthen academia-industry-government stakeholder engagement through funding initiatives, such as the enhanced control room in the innovation centre, and will build on previous investment to enable greater autonomy and smarter operation of new and existing platforms, for example through enhanced command and control.”

Some of this investment will be used to develop new sensors capable of working within the ocean’s most extreme conditions. The sensors will be able to perform different functions whilst out at sea, helping researchers to answer questions about our changing oceans such as how carbon dioxide moves between ocean and atmosphere and the health of cold-water corals in marine protected areas.

The new sensors are currently in development and will be market ready by the end of the programme, with three of the projects already involving commercial partners such as ANB Sensors, Planet Ocean Ltd, ASV Ltd and Chelsea Technologies.

Also, this week it was announced that three new MAS projects will be undertaken by the NOC and its industry partners, following successful bids as part of a collaborative R&D competition run by Innovate UK. The funding awards were announced at the Innovate 2017 conference by Climate Change and Industry Minister, Claire Perry, as part of the government’s £93 million of funding for the ‘robotics and AI in extreme environments programme’ through the ISCF. The programme aims to develop robotic solutions to make a safer working environment in industries such as offshore energy, nuclear energy, space, and deep mining, increase productivity, and open up new cross-disciplinary opportunities.

Nutrient sensors on autonomous vehicles, led by Professor Matt Mowlem at the National Oceanography Centre. This project will seek to adapt and optimise an existing platform to produce six new operational sensors for nutrients and micronutrients. The results will be crucial to advance our knowledge of how marine ecosystems work and how they respond to a changing climate. These 'lab-on-chip' miniaturised laboratories will be able to perform seawater chemical analysis using small amounts of seawater samples and chemical reagents to help create more complete low-cost ocean chemical datasets.

Carbonate chemistry autonomous sensor system (CarCASS) led by Professor Matt Mowlem at the National Oceanography Centre. This proposal aims to create a sensor capable of taking the first autonomous measurements of the seawater carbonate chemistry from the surface to full ocean depth. The resulting sensor will be used to improve our understanding of the inorganic carbon cycle in the ocean, as well as monitor ocean acidification shell fishing areas and mariculture establishments. The sensor will also be a powerful tool for monitoring sub-seafloor carbon storage as it would be able to detect leaks of CO2 during and after gas injection.

Intelligent on-board processing of visual data for real-time situational awareness by Unmanned Surface Vessels (USVs) - led by Seiche Ltd in partnership with the NOC and Autonaut Ltd This project will develop an intelligent visual imaging system (including infra-red) that will be integrated into an unmanned surface vehicle (USV). The system will process data using computational algorithms and artificial intelligence to visually detect and track objects of interest at sea. A robust communication link will be developed to allow data transfer to a remote location for further action or analysis in near real-time. This will be a low-power, low bandwidth system capable of long-duration missions and integration into all autonomous platforms, including the wave-propelled AutoNaut USV.

Marine mammals and seabirds are a key concern of the offshore energy industry and monitoring of marine life will be the primary aim. This application will enhance environmental impact assessments and assist completion of operations in line with worldwide environmental standards. This innovative method will also have potential in other marine domain awareness applications, such as; asset integrity monitoring, surveillance of marine protected areas, security, border patrol and defence.

Precise positioning for persistent AUVs - led by Sonardyne International, partnered by Autonomous Surface Vehicles Ltd and the NOC This project aims to achieve a step change in how Autonomous Underwater Vehicles (AUV) are positioned for persistent and/or long endurance missions, enabling a breakthrough in their use in the offshore energy sector. Through a programme of complementary work packages, this project will develop a variety of new positioning technologies that will provide AUVs with enhanced levels of independence from current infrastructures that inhibit the employment of this technology in the offshore industry. These developments include autonomous deployment and calibration of seabed navigation transponders, low power 'trained' inertial navigation and current profiling to reduce errors during diving and surfacing.

Networking ecoSUB autonomous underwater vehicles - led by Planet Ocean in partnership with NOC ecoSUB AUVs have been developed in collaboration between Planet Ocean and the NOC and provide users with low cost, small, easy to operate, launch and recover, AUV platforms with up to 2,500m depth rating and long range/endurance capability. This project seeks to develop an end-user requirements led innovative solution enabling accurate underwater positioning and smart AI for navigating in dynamic environments, it translates fundamental research in underwater positioning and delivers a Smart Network Positioning system for fleets of AUVs and an enhanced AI pilot feature. Innovative acoustic nano-modem technology developed within Newcastle University is an integral component in delivering success in this project.