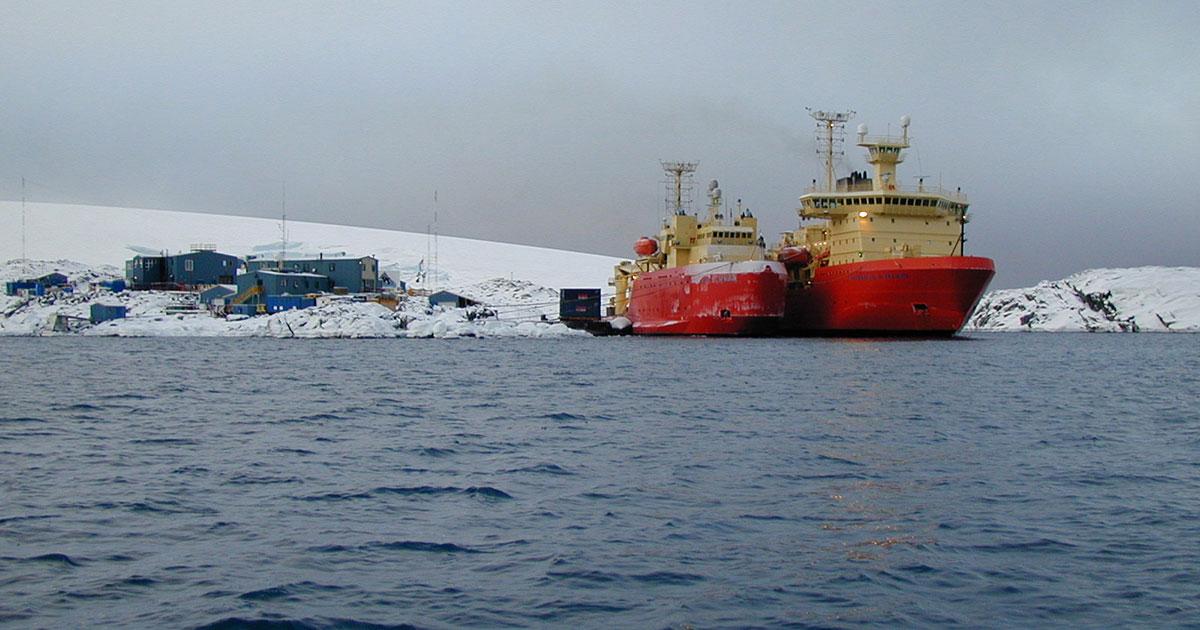 Despite its remote location in high austral latitudes, the Southern Ocean has far-reaching influence on Earth’s climate and global ocean circulation. Recent climate studies clarified the Southern Ocean’s role in absorbing large amounts of CO2 and heat that would otherwise reside in the atmosphere.

Oceanographic studies found widespread intense mixing and large uptake of wind energy that reinforce the region’s importance for the global overturning circulation. Furthermore, the Southern Ocean is a sensitive indicator of the global ocean’s response to changing climate—especially shifting winds and warming. 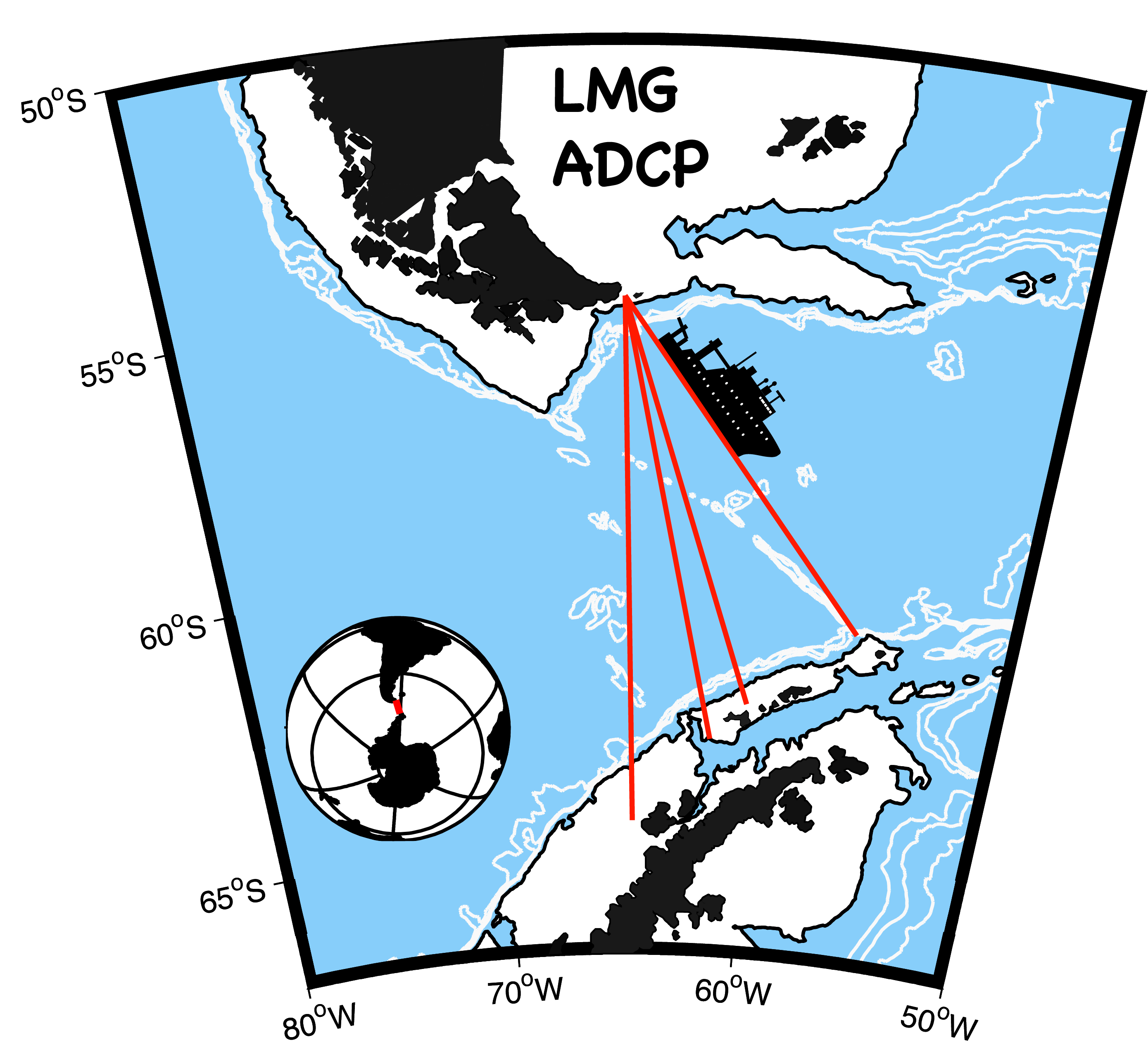 Deep, strong ocean currents circle the globe in the Southern Ocean. This influential flow, known as the Antarctic Circumpolar Current, connects all three major oceans. Its narrowest constriction is Drake Passage, a location notorious for its challenging seas. Despite the difficulty, Drake Passage has seen several enduring studies by US, UK, and French researchers. For two decades, ADCPs carried by US Antarctic supply ships have continually measured currents during crossings of Drake Passage.

Various forcing mechanisms produce upper-ocean currents in Drake Passage. The repetition and depth of the ADCP transects are helpful for sorting out the different types of currents. These well-resolved ADCP transects have been used to explore features of the Antarctic Circumpolar Current and its energetic eddy field. A range of scientific papers followed. Some described the spatial distribution and vertical structure of currents and plankton. Others examined dynamical properties.

Since 1999, two supply ships of the US Antarctic Program have repeated ADCP transects while crossing Drake Passage about twice per month. The ships move at 5 m/s so that each crossing of Drake Passage takes about two days.

NSF Polar Programs provided continuous funding for this program. Researchers from Scripps Institution of Oceanography and University of Hawaii drove this effort, measuring sustained changes in the speed, transport, and distribution of the prevailing currents.

Initially, a hull‐mounted 150 kHz ADCP profiled currents to a depth of 300 m. Five years later, a second 38 kHz ADCP was added to reach 1000 m. The two frequencies offer complementary range / resolution capabilities, with data sets having vertical resolution of 8 m and 24 m respectively. Unique aspects of these installations included the ADCP’s immersion in anti-freeze solution, and their protection during ice breaking operations.

A variety of scientific studies have used these ADCP transects to explore features of the Southern Ocean, particularly the Antarctic Circumpolar Current. Most work has considered water currents. Two reports focused on ADCP echo intensity data, describing patterns in plankton distribution—especially the near- surface scattering layer.

These frontal regions are distinguished by clear changes in water properties and strong narrow currents, called “jets.” The current field is enriched with motions due to eddies, frontal meandering, and strong winds. Some zonation is observed; for example, eddy energy is greater northward of the Polar Front. 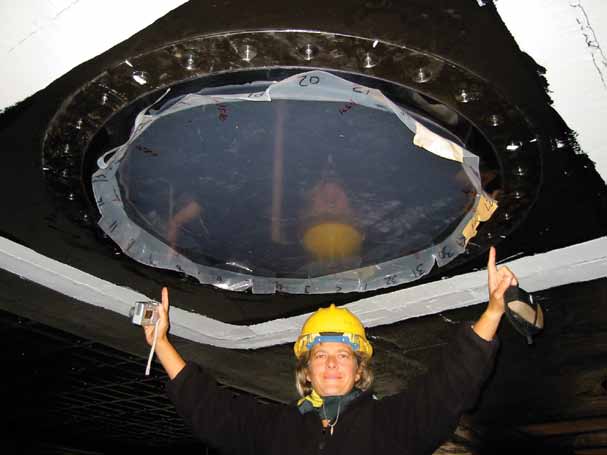 From the mid-1980s, ADCPs on research ships provided a new 2-D view of upper-ocean currents: along-track and through depth. Two different types of measurements are merged to observe currents from a ship underway. The first is the apparent velocity of the water when seen from the moving ship; the second is the motion of the ship. Away from coastal regions, a GPS or GNSS generally supplies the latter.

Researchers at the University of Hawaii and other institutions developed best practices for extracting high-quality ADCP sections (https://goo.gl/zxB5Pk). They also improved understanding of the environmental influences on the vertical reach of shipboard ADCPs.

Accurately mapping the velocity of deep ocean currents from a ship moving faster than 3 m/s is challenging. It demands that shipboard ADCPs operate at low frequency yet keep narrow acoustic beams. This pairing resulted in large-sized transducer assemblies.

Teledyne RDI developed a more compact phased-array design. It emits four narrow beams of sound from a single transducer face. This advance made it feasible to install 38 kHz ADCPs on ships. In turn, this frequency permitted profiling to 1000 m depth consistently.

Long time-series measurements in oceanography are uncommon because their collection and funding are difficult. Yet such series are prized for assessing how the ocean is responding to a changing climate. A standout feature of the ADCP transects across Drake Passage is their 20-year duration. Other distinctions are their high spatial resolution (5 km), depth (1000 m), and accuracy (1 cm/s).

Under the leadership of Dr. Teresa Chereskin, scientists at Scripps Institution of Oceanography used the ADCP transects to study dynamical features. One was persistent structure of the Antarctic Circumpolar Current. By examining vertical structure of the upper kilometer, the researchers identified distinctive aspects of the current field.

For example, the energy levels of eddy motions showed marked changes in depth whereas average current conditions did not. In fact, speeds to 20 cm/s persisted at a depth of one kilometer.

The dominant vertical direction of energy propagation flipped between upper ocean and greater depths. This is consistent with internal wave sources: storms at the surface and submarine ridges at depth.

Due to the sharply defined spatial structure in the ADCP transects, scientists could quantify reliably the frontal regions and energetic eddy fields. In particular, current speeds of narrow frontal jets appear more accurate rather than smeared, and quiet regions near frontal jets are unmasked.

The longevity of the ADCP program permits more reliable statistical calculations and has produced notable results. One was to discern characteristics of the mean Ekman layer and its associated heat flux. These features tend to be masked in mid-latitude oceans.

Eddies were seen to produce a momentum convergence that reinforces the frontal zones. And, by combining ADCP data with XBT temperature profiles, scientists found a large poleward heat flux in the near‐surface layer.

With the upsurge of scientific interest in the Southern Ocean, the enduring ADCP transects across Drake Passage will likely see more attention. 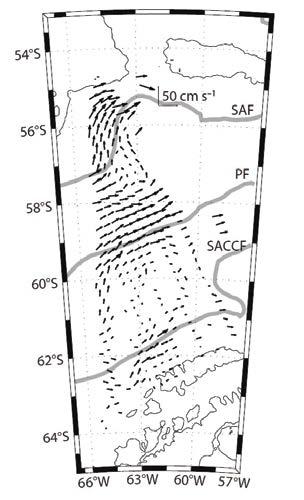