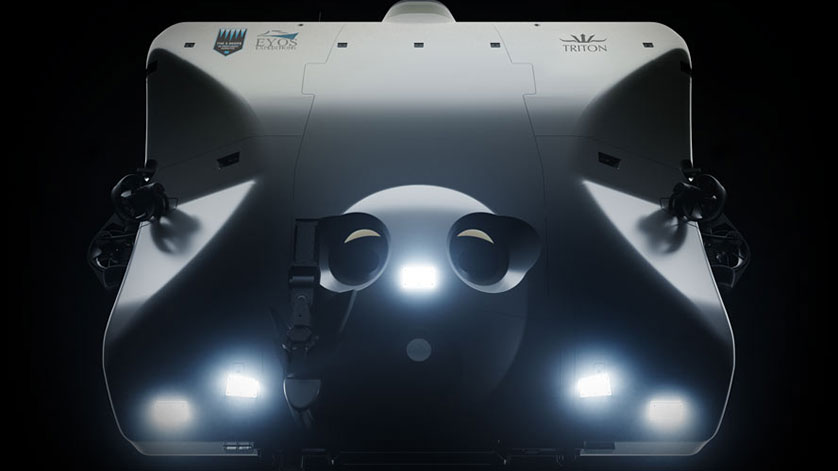 Triton Submarines LLC, a leading manufacturer of personal submarines designed for yacht and cruise ship deployment is proud to announce the introduction of the The Triton 36000/2, the world’s first manned submersible commercially certified for repeatable exploration to the deepest point in the ocean.

Arguably the most impressive tool for human exploration and scientific endeavor since Apollo 11, over 4,000 people have achieved the summit of Everest, 220 astronauts have visited the ISS and twelve humans have walked on the moon. The Triton 36000/2 will have access to a place only three people have ever journeyed in history.

Incorporating the world’s deepest diving independently certified submersible, the Triton 36000/2, and its support vessel, DSSV Pressure Drop, “The Hadal Exploration System” is currently on an around-the-world journey to dive to the deepest point in each of the world’s five oceans, as well as select historical wrecks. This mission, called “The Five Deeps Expedition,” will be the ultimate validation of the 36000/2 submersible, proving its capability, reliability and safety.

Designed and certified to make thousands of dives to Hadal depths during decades of service, the Triton 36000/2 Hadal Exploration System is available for acquisition today by a private individual, governmental organization, research institute or philanthropic foundation for $48.2 million. The new owner will take delivery in 2019, following the successful completion of the Five Deeps Expedition. The Hadal Exploration System will be proven and it will have extended the boundaries of human endeavour and technology, offering a unique deep-diving capability unmatched by any nation or organization in the world.

The challenge to create the ultimate, repeatable full ocean depth, fully certified, science platform of consequence is one only Triton could achieve. A masterpiece of design, technology and precision engineering, the Triton 36000/2's pressure hull required development of new advanced forging techniques to ensure the perfect circularity necessary for structural performance and an entirely weld-free construction. The interior configuration of the Triton 36000/2 is unlike any previous full ocean depth submersible. The ergonomically designed leather seats provide two occupants the comfort and durability required on 12-hour dive missions.

“I had the privilege of working with an exceptional group of creative, dedicated and resourceful people on the development of the Triton 36000/2,” said Patrick Lahey, Co-Founder and President of Triton. “We worked for over three years to develop the design and required technology. The submersible, together with the unique and specially equipped support vessel DSSV Pressure Drop, promise to change our relationship with the deep ocean in a profound and fundamental way. The Hadal Exploration System provides the opportunity to truly explore and intimately study the most remote and least understood areas of our oceans, for the first time in history.”

Designed to slip vertically through the water column, the Triton 36000/2 will reach the 10,898m bottom of Challenger Deep, at almost 11km the deepest point in the ocean, in less than two and a half hours. Weighing just 11.2 tons, the submersible is far lighter than previous deep diving vehicles, an important consideration during launch and recovery. An array of 10 electric thrusters provides motion in all directions. Energy is supplied by a set of cutting-edge full ocean depth certified Li-Fe-P batteries supplying 65 KWh, co-developed specifically for the task by Triton.

With safety at the core of Triton’s founding principles, the 36000/2 does not compromise in design or build. Every stage has been observed, scrutinized and certified by DNV-GL, a third-party Classification Society. No other full ocean depth submersible has ever been certified.

Manufactured to tolerances no other submersible can match, over 150 suppliers from 36 different countries contributed to the project; in many cases re-thinking the technologies used to develop weight-critical, precision-critical components in compliance with stringent quality requirements.

In order to accelerate sustainable governance of our oceans, we must first understand them. We cannot begin to understand our oceans through observation of the relative shallows alone. The complex interactions to which the singular environment of the ocean plays host – biological, chemical and geological – are affected dramatically by localized factors.

Between full ocean depth and the surface lies a vast feature rich environment that covers 70 percent of the earth’s surface. Previously out of reach of mankind, the vast majority remains unexplored. Now, with the Triton 36000/2, for a true pioneer no subsea feature is beyond reach and unchartered continents await.

The Triton Full Ocean Depth System includes three 11,000m-rated FOD-capable Landers that will support the Triton 36000/2 and carry out additional science tasks. L3 Systems-supplied acoustic modems aid the submersible in navigation and allow scientists to communicate with the Lander. Features include video and time-lapse cameras, a sample ‘bio box’, push core samplers, conductivity, temperature and depth sensors, and an array of other scientific instruments.

DSSV Pressure Drop is outfitted with Kongsberg-Simrad’s first installation of their new upgrade to the EM-24 multi-bean sonar, enabling precise, quick, high-definition topographic mapping of the ocean floor at extreme depths. This allows for both accurate surveying work and in the development of a perfect dive plan for the submersible in any location.

DSSV Pressure Drop is a newly refitted scientific research vessel customized specifically for the integration of the Triton 36000/2. The submersible’s custom cradle resides in a retractable hangar that protects the submersibles during passages. Astern the A-Frame is rated for manned launch and recovery operations. On the main deck, a studio and both a wet- and dry-labs offer dedicated space for media and science activities. Comfortable accommodation is provided for 47 personnel.

Currently available for acquisition for $48.2-million (USD) exclusively through Triton Submarines, the Hadal Exploration System, including the Triton 36000/2 submersible Limiting Factor, host dive vessel DSSV Pressure Drop and all scientific equipment, will be available for delivery in 2019.