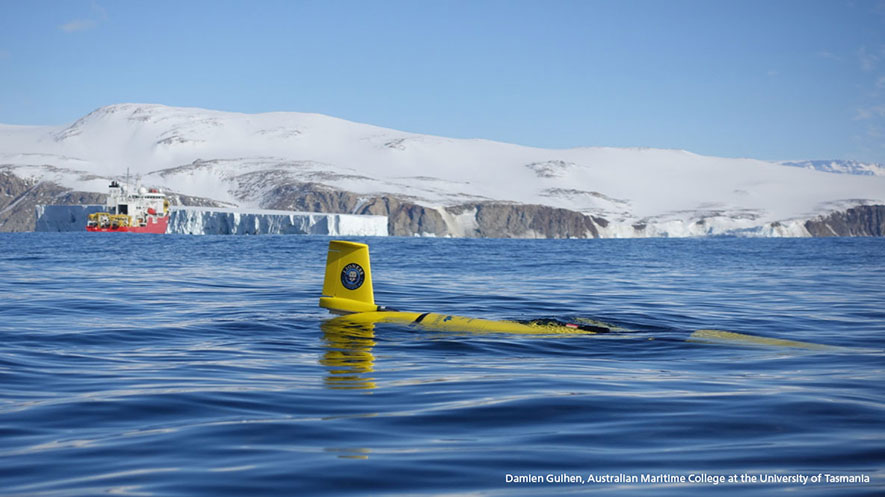 Teledyne Webb Research announces the recent sale and delivery of a Slocum Glider to The University of California, Davis. After its maiden flight in Antarctica, where the vehicle was initially used to examine physical processes of ice shelves in the Western Ross Sea, it has now been delivered to Davis where plans are underway for its new deployment in Lake Tahoe.

The glider shipped to UC Davis is equipped with a Seabird SBE pumped CTD, Wetlabs FLBBCD sensor and two customers supplied sensors including an Aanderraa oxygen optode and a sonotronics fish pinger.

The vehicle was initially used in Western Ross Sea by Dr. Alexander Forrest from the University of California, Davis and an international team of researchers on a collaborative study of ice / ocean processes in the region. Dr. Forrest’s team, which includes the Korean Polar Research Institute (KOPRI), collaborated on a robotics investigation of the ice shelves using a Teledyne Gavia AUV from the University of British Columbia, and UC Davis’ new Teledyne Webb Research Slocum glider.

The team deployed the AUV in an effort to map the bottom of the Nansen ice shelf while the Slocum glider “patrolled” in front of the ice shelf looking for evidence of fresh water and capturing change over time. While AUVs provide a snapshot look at the bottom of the ice shelf during a specific moment in the tidal range, a glider running on two-week missions will hopefully capture ebbs and means during the entire tidal cycle. The combined information could provide important data on the rate of melting and separation of these ice shelves.

Utilizing remotely managed autonomous underwater vehicles like the Slocum glider will enable researchers to gather vital water column data to improve their understanding of ice erosion in a manner that is not available using other means. Slocum gliders can be equipped with a choice of over 40 different sensors and are capable of deployments lasting up to a year.