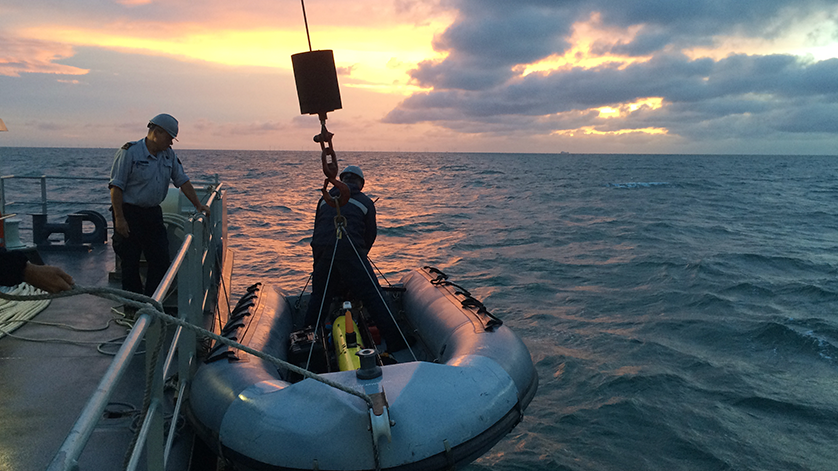 The purpose of the Belgian Navy trials was to showcase new capabilities in Mine Warfare and featured participation from several industry vendors including Teledyne Marine. The Centre for Maritime Research and Experimentation (CMRE) assisted the Belgian Navy in evaluating industry trial efforts. The trials were conducted from Belgian Navy vessels offshore of Zeebruge in a target range that had been seeded with various types of Mine Like Objects.

During the trials, Teledyne Marine showcased a significant capability in Gap fill utilizing the Teledyne BlueView 2250 multibeam profiler coupled with the Edgetech 2205 600/1600 kHz Side Scan Sonar on a Gavia AUV. The Teledyne BlueView 2250 multibeam profiler has a twofold benefit for AUV users as it fulfills not only high resolution multibeam requirements, such as pipeline inspection for commercial applications or target identification for military applications, but it can also be utilized to gap fill the nadir or low data density portion of the side scan sonar that is directly underneath the path of travel for an AUV.

Traditional side scan sonar surveys using an AUV will typically run the vehicle in a “lawnmower” type pattern until a survey area has been completely covered. Due to the nadir gap in side scan sonar there must always be sufficient data overlap of the adjacent survey line to achieve full area coverage. Utilizing a gap fill system such as the BlueView 2250 that gathers high frequency multi beam data in the nadir gap, it is possible to minimize any side scan overlap and to extend the survey area or reduce the amount of time that the AUV will require for full coverage of a given area.

During the Belgian Navy trials, use of the Teledyne BlueView 2250 allowed the Gavia AUV to cover roughly 40% more area in a given time than the vehicle would have been able to cover without the use of gap fill. This greatly increased coverage area is a significant development for small AUVs. The increased productivity can enable fewer AUVs to carry out larger tasks and can allow smaller, man portable AUVs to conduct surveys that are currently being conducted by larger and more costly systems requiring dedicated surface vessel support.