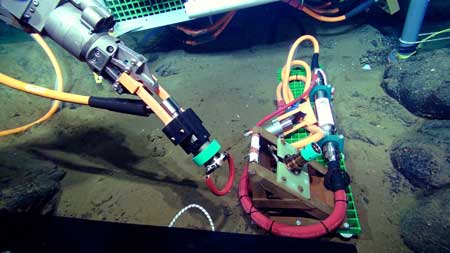 Teledyne Marine recently introduced the Electrical/Optical Flying Lead (EOFL), a compact, in-line media converter solution for subsea data transmission networks. The EOFL converts a fiber optic signal through a fiber optic wet- mate connector, and produces an electrical Ethernet signal through an electrical connector on the other end. The conversion from optical to electrical is accomplished in a compact, 1- atmosphere internal pressure chamber that is rated to an exposure of up to 10,000 PSI external pressure. This technology allows data to be transmitted through deep water at lengths previously not possible with existing technology.

Ocean Networks Canada’s (ONC), NEPTUNE observatory is a 500-mile loop of fiber optic cables and sensing instruments off the west coast of British Columbia, Canada. Wet mateable interconnect, or flying leads, to transmit data from the instruments to a shore station is critical enabling technology.

ONC selected four units of the EOFL to connect two cable runs planned for the NEPTUNE cabled observatory. The two instrument locations are 1 mile and 2.4 miles from their primary junction boxes in over 7800 feet of water. Installation was successfully completed in June 2016, and the four units are performing with no issues. “Some very happy scientists are now receiving real-time data from new science sites as a result of the successful deployment,” says Adrian Round, Director of Observatory Operations for ONC.