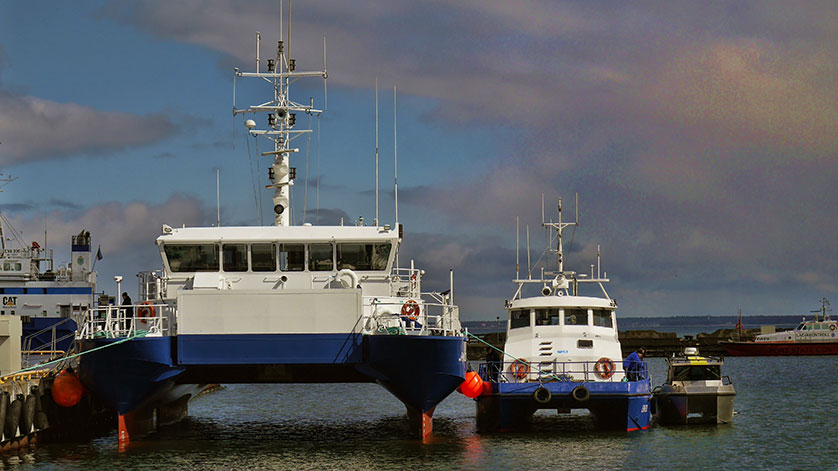 Why are they surveying these old wrecks?

The mission of the Estonian Maritime Administration is to ensure safe navigation in Estonian waters. It is extremely important to identify all possible navigational hazards, including wrecks. Some of these wrecks, especially those lost during WWII pose a potential environmental threat because of their cargo and fuel. High resolution Multibeam sonar systems help find and identify such wrecks. Below are some great examples of wrecks surveyed using a Teledyne RESON SeaBat 7125.

The Hydrographic Department of the Estonian Maritime administration was founded in 1993. Its primary purpose is to conduct hydrographic surveys in Estonian waters, including inland waterways.

There are thirteen surveyors at work in the Hydrographic Department. The survey season is usually from May until November, whilst the data processing is mostly done during the winter. All of the collected and processed data enters the hydrography information database - HIS. Data layers from this database are then available in the web application Nutimeri (Smart Sea).

To this day, the Hydrographic Department has charted 47% of Estonia’s maritime areas and the long-term objective is to chart 100%, which is stated in the maritime policy of the state.

Jakob Prei is a 26m long SWATH type vessel for open-sea surveys. The vessel is equipped with flush-mounted Seabat 7125 SV.

EVA-320 is an 18m catamaran type vessel soon to be equipped with a SeaBat T50-R. She generally conducts surveys in shallower areas of the Baltic Sea, such as the Väinameri Sea - a sub-bay between the Western Estonian Archipelago and the Estonian mainland.

As mentioned, the following examples highlight some of the wrecks that the department has surveyed. These surveys have been conducted using a SeaBat 7125 SV onboard the Jakob Prei.

The steamship Dago was built in England in 1912 as a cargo ship. The ship was taken into use by the Russian navy during WWI, and was rebuilt as an armed minesweeper carrying the bow number 4. Dago was anchored West of Osmussaar island on 23 October 1915 due to bad weather, when she was attacked by the German submarine U-9. The torpedo was shot from a short distance and hit the minesweeper right in the center. The vessel foundered immediately. 7 Seven crew members were killed. For more information, click here.

The gunnery ship-minesweeper Myrtle was built in England in 1915. The ship arrived to Estonia during the days of the War of Independence as part of the British squadron. The ship was sweeping the German mine barriers from the sea routes. Myrtle was lost on a German minefield near Harilaiu islet on 15 July 1919. The ship was severely damaged in the course of several mine explosions. There were casualties. For more information, click here.

Latvian steamer, built in England in 1899. Hit a mine on 30 June 1941 and foundered. Five people lost their lives. For more information, click here.

The brig Aid, captained by Richard Errington was on her way from Sunderland to Kronstadt when she hit a reef near Hiiumaa in the evening of 9 August 1863. The crew of eight men were forced to leave the ship and head towards land in boats. The ship repeatedly rammed the seabed and obtained a huge leakage. The rudder of the ship broke and the attempt to steer the ship to shore failed. There was a risk that the vessel would drift further from the shore and so the 8-membered crew abandoned ship and headed towards land in boats early morning on 10 August. Before heading towards land, the light of Kõpu lighthouse could be seen 10-12 miles S by E from the accident site. 15 minutes later the ship sank. For more information, click here.

The tugboat Vega was being tugged by another tugboat Zubr and was lost on 06.02.2016 possibly due to bad weather. Vega didn’t have any crew or fuel on board.

An unknown wreck is… well, unknown. It’s one of the many wrecks still waiting to be identified.