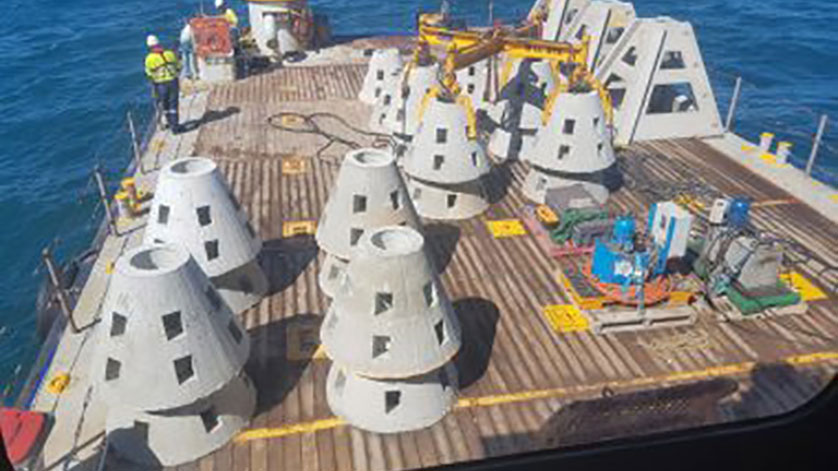 After many years working on bringing this vision to life, Subcon, Recfishwest, BHP, NERA, Curtin and the local community are thrilled to see new accessible and safe fishing opportunities for locals and tourists in the Exmouth area. The reef integrates offshore structures into a purpose-built reef through re-engineering and augmentation with specially designed concrete substrates and is a world first solution to habitat restoration.

King Reef is located 3.5nM north of the twonship of Exmouth in Western Australia. The reef lies in close proximity to multiple boat ramps located in Exmouth Gulf on the sheltered side of the North West Cape which will create new and safe fishing opportunities for families with small boats. King reef occupies two acres on the ocean floor, in 18m wataer depth and resides only 10 minutes from local boat ramps. 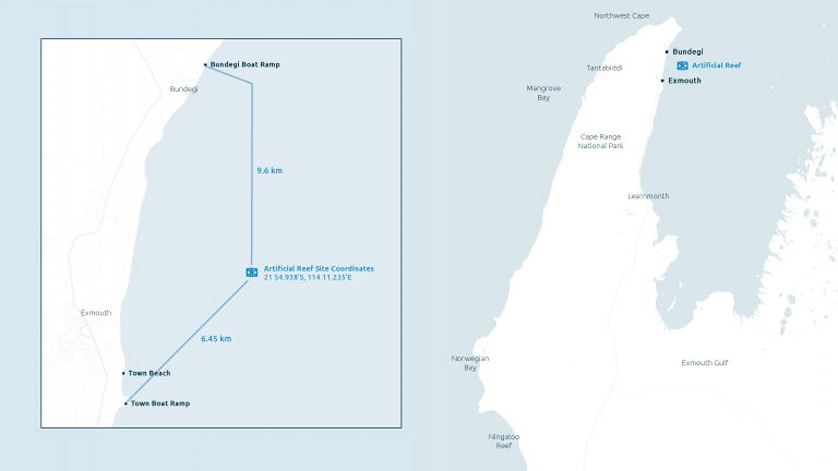 The project is a collaboration between Recfishwest, BHP, NERA (National Energy Resources Australia), Subcon International and Curtin University. Through Recfishwest the project also has support and funding from the Western Australian State Government. This partnership between industry and community has allowed for the creation of WA’s largest artificial reef thanks to six large repurposed steel reef units kindly donated by BHP. These structures have been modified with additional features creating the unique environmentally safe habitat for fish.

Positioned on a previously sandy barren seafloor, the six giant steel structures are integrated with concrete modules (49) to form the reef’s 55 module arrangement. With over 27,000m3 of new habitat being introduced, the reef will quickly become home to a range of different fish species as well as food sources and a colonizing organisms such algae, coral and sponges enhancing ocean biodiversity and fishing experiences for generations to come. 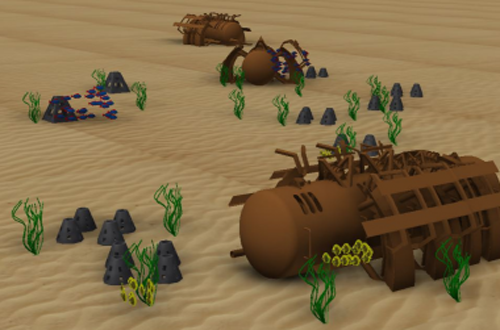 The reef will be monitored by Curtin University and Recfishwest under their reef vision program for the next 30 years.

Subcon CEO Matthew Allen said: “Subcon and the consortium partners have set a new benchmark for habitat restoration in the region. The re-engineering of retired marine structures into purpose-built substrates will provide important habitat for centuries and creates a truly excellent outcome for the Exmouth community, Australian tax payers and the environment. I’d like to recognize our talented team at Subcon, who have blazed a trail by blending science and offshore engineering to deliver a very special project for the Exmouth community and the thousands of tourists that visit from Perth and around the world each year”.

More information is available in the Minister’s Announcement and on the IAR Fact Sheet. Recfishwest have produced a great video on Engineered Ecosystems.

KONGSBERG Integrated Delivery for the Ne

Turbidity Plus with Integrated Wiper fro

JFSE Launches the ‘Excavation Plus’ Inte

Per Martin Tanggaard Becomes First Ever

When an AUV Becomes a Towed Sonar: Birth