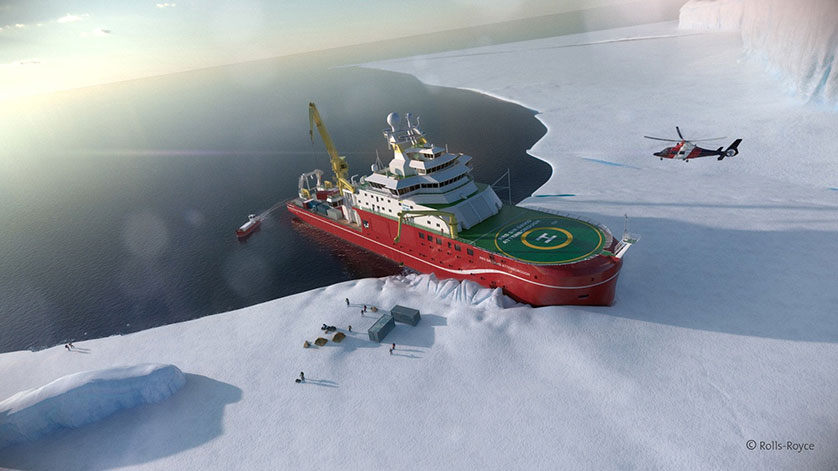 The Ranger 2 Ultra-Short BaseLine (USBL) system will be used by scientists to precisely track the position of, and communicate with, scientific instruments and robotic vehicles deployed from the vessel, including the now famous Boaty McBoatface AUV. Ranger 2 will also be interfaced with the vessel’s dynamic positioning (DP) system for precise station keeping during science operations.

Commissioned by British Antarctic Survey, an institute of the Natural Environment Research Council (NERC), and being built by Cammell Laird in Birkenhead to a Rolls Royce design, the RRS David Attenborough will be one of the most advanced vessels of its type when it enters service in 2019. Measuring 128 metres long and 24 metres wide, the new ship will have a range of 19,000 nautical miles and be able to accommodate up to 60 scientists engaged in ocean, seafloor and atmospheric research.

Alongside design and engineering services, Rolls Royce is supplying a comprehensive package of control systems and equipment for the vessel, including the DP system. This will utilise data from Ranger 2 to maintain a stable vessel position as equipment and vehicles are deployed and recovered in some of the most challenging marine environments on the planet.

Sonardyne’s contract includes the supply of two through-hull deployment machines, seafloor and vehicle-mounted tracking transponders, and topside control hardware and software. The first equipment deliveries to Cammell Laird for integration into the vessel have already begun.

The commissioning of the RRS Sir David Attenborough represents the UK Government‘s largest investment in polar science since the 1980s. When the ship comes into service, all three Royal Research Ships, James Cook, Discovery and now Sir David Attenborough, will be equipped with Sonardyne underwater positioning technology.

Speaking of the significance of the contract, Mark Carter, Global Business Manager for Sonardyne said, “As a privately-owned British engineering company, it’s a great honour for our technology to have been selected for Britain’s next polar research vessel.” He added, “The work now begins to deliver Ranger 2 and support Rolls Royce, Cammell Laird and British Antarctic Survey through the installation and commissioning phases of the project.”