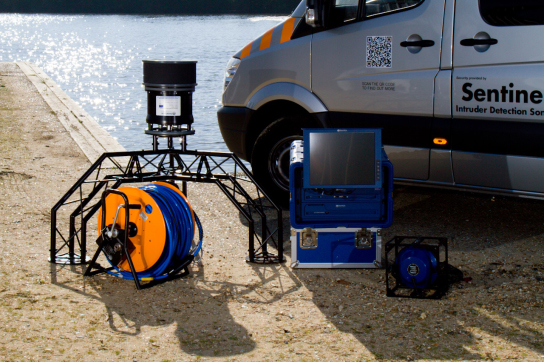 An undisclosed coastal facility in the Middle East has become the first location in the world to be equipped with the new, more portable variant of Sonardyne International Ltd’s diver detection sonar – Sentinel.

The UK-based maritime security company made the announcement following a program of system enhancements to Sentinel, the market leading underwater intruder sonar. This means that only one Sonar Processor topside unit is now required to command each in-water sonar head, halving the previous number needed.

Sentinel IDS is the security industry’s most widely installed sonar of its type thanks to its long range capabilities in identifying unauthorized access to military and high security facilities from under the water. These include divers and unmanned underwater vehicles (UUVs) approaching ports, harbors, critical national infrastructure, offshore energy platforms and private yachts.

Using highly developed acoustic signature classification techniques, Sentinel can determine the type of threat that has been detected and establish whether it is a scuba or closed circuit diver or UUV. Targets are automatically separated from non-threats such as fauna, cetacean, fish and flotsam, ensuring a low false alarm rate and maximum response time for security teams.

The increase in sonar processing power and reduction in equipment overhead brought about the latest product upgrades, is expected to be of particular benefit to users that need a rapidly deployable maritime security capability to protect waterside facilities and vessels against the threat of attack. In military terms, this operational requirement is referred to as a Portable Diver Detection Sonar (PDDS).

Sentinel’s small, lightweight sonar head can be permanently deployed on the seabed, from a jetty or over the side of a patrol vessel and once configured, can be left to run autonomously; no previous experience of sonar systems is required to operate the system. It can be used as a standalone security measure or integrated with CCTV, radar and other sensors to enhance the situational awareness picture for large waterside facilities.

Commenting on the Sentinel system upgrade and confirmation of this latest contract, Nick Swift, Sonardyne’s Business Manager for Maritime Security said, “The introduction of a new, more powerful Sonar Processor for Sentinel demonstrates our commitment to ensuring that, as the threat landscape changes, our underwater technology evolves to keep pace with end-users’ requirements. He went on to say, “The reduced footprint of the single head system now makes Sentinel IDS even more suitable for both rapid deployment and permanent installations.”