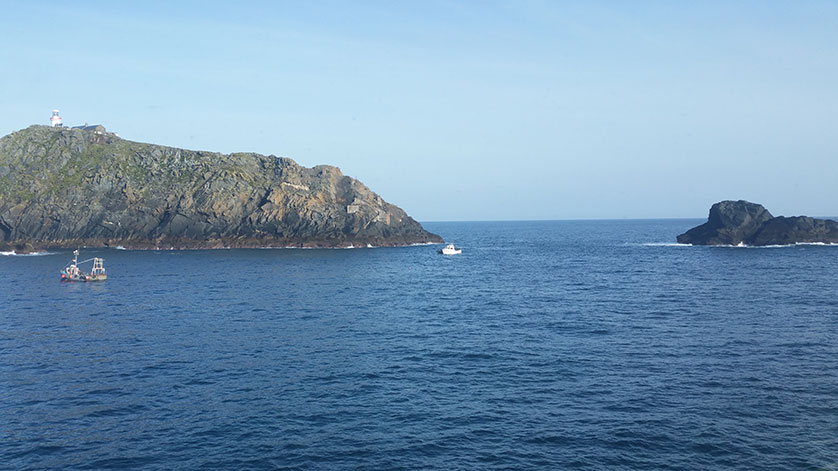 A mission to search for the wreckage of an Irish Coast Guard helicopter which crashed into the Atlantic earlier this year killing all four crew members, was supported with underwater locating equipment from Sonardyne International Ltd.

Within hours of rescuers arriving at the scene of the accident off the west coast of Ireland, Sonardyne Scout USBL (Ultra-Short BaseLine) and ROV-Homer acoustic tracking and relocation systems, owned and operated by the country’s Marine Institute, had detected emergency signals being transmitted from the aircraft’s flight data recorder (FDR). Using an ROV, search teams were subsequently able to pinpoint the exact location of the wreck which was lying in 40 meters of water.

Rescue 116, a Sikorsky S92 search and rescue helicopter operated by Canadian Helicopter corporation (CHC) on behalf of the Irish Coast Guard, disappeared from radar screens at 12.46am on March 14th in the vicinity of Blackrock, an isolated rocky islet.

As part of the emergency response, Ireland’s Air Accident Investigation Unit (AAIU), together with the Irish Coast Guard, requested equipment and personnel from the Marine Institute to assist with the initial search for the wreckage. This included the Scout USBL system which was mobilized on a local fishing vessel and onsite within four hours of the institute’s team arriving.

The system is typically used for tracking divers, ROVs and underwater vehicles in waters up to 1,000 meters, and is designed to be operated from virtually any type of vessel, small or large. Scout is portable, quick to setup and easy to use making it ideal for short underwater surveys and operations.

Following a three-hour search, the Scout picked up the first faint signals from the aircraft’s 37.5 khz Dukane underwater locator beacon attached to its flight data recorder - or ‘black box.’ This was despite rough sea conditions and the vessel often operating within 50 meters of the rocky coastline.

The Marine Institute deployed its Work-class ROV and using the data from the Scout search, operators were able navigate the ROV to the wreck site. The ROV was also equipped with a Sonardyne ROV-Homer system which was used to ‘home’ directly in on the signals from the Dukane pinger. To make moving around through the debris field easier for the ROV’s pilot, a number of transponders compatible with the ROV-Homer were deployed to act as navigation waypoints. Irish navy divers later recovered the flight recorder which was found to be in good condition and transferred it to the UK for analysis.

Reflecting on the performance of their Sonardyne equipment during this difficult mission, Aodhan Fitzgerald, Research Vessel Manager for the Marine Institute said, “The portable design of the Scout meant that we could rapidly mobilize the system onto a vessel of opportunity – a small fishing boat that was made available to us. Despite challenging sea conditions, Scout allowed us to rapidly locate the exact seabed location of the aircraft’s FDR whose recovery was crucial to solving the cause behind this tragedy.”