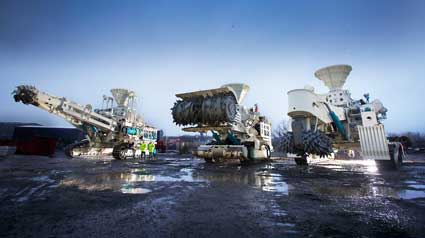 In late 2007 SMD was awarded with a contract to design and build the world’s first deep sea mining vehicles for Canadian listed company Nautilus Minerals. Eight years on, having worked in close partnership with the customer, this massive feat of engineering is complete. The SPTs and associated equipment, totaling over 1000 tons, have now been loaded onto the vessel which has set sail for Duqm Port in Oman where they will undergo further testing.

As well as the three mining machines or Seafloor Production Tools (SPTs), SMD designed and manufactured the full spread equipment required to remotely operate, launch and recover the SPTs from the deck of the ship onto which they will be installed in 2017.

SMD conducted rigorous commissioning and factory acceptance testing on the full spread of equipment in dry conditions on land at their production facility in Wallsend, North East England prior to shipping. The SPTs will now undergo extensive wet testing at the port facility in Oman which is designed to provide a submerged demonstration of the fully assembled SPTs, prior to commencement of the first mining operations in 2018.

The load out operation took place at Swans, an advanced manufacturing site being developed next to SMD’s site on the banks of the River Tyne. It was the first operation of its kind to take place at Swans’ recently dredged 9m-deep quay.

SMD CEO Andrew Hodgson commented “It is a fantastic achievement for SMD to deliver another engineering world first project. Our engineers have taken proven technology which we have developed over forty years, and adapted it for a new application to suit Nautilus’ needs, and we’re very proud of that.

We thrive on using our problem solving skills to help our customers make the impossible possible and we’re delighted to have been involved in what stands to be a game-changing project facilitating birth of a new industry.”

Nautilus’ CEO Mike Johnston commented “Nautilus’ approach in building the world’s first seafloor mine was to seek out world class partners, leaders in their respective fields, and SMD’s unparalleled leadership in the design and manufacture of remotely operated vehicles operating in the earth’s harshest environments certainly reaffirms the validity of that strategy.”

“SMD’s engineering design and manufacture of our seafloor production tools is simply second to none; we thank them for their invaluable partnership and their determined leadership in building these impressive machines, and we look forward to seeing them in action on the seafloor once our project at Solwara 1 is in production in 2018.”

Patrick Melia, Chief Executive of North Tyneside Council which owns Swans, said: “We are delighted that world-leading projects like this are being delivered at Swans.

“Our state-of-the-art advanced manufacturing facilities being developed at Swans and other sites make North Tyneside one of the best places to do business, and we’re thrilled to be helping those in the marine, energy and offshore industries to compete in a global market.”