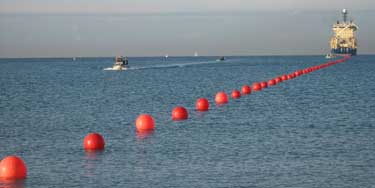 Seaborn Networks has announced the completion of its US$500 million project funding for Seabras-1, a new transoceanic subsea fiber optic cable system directly connecting points of presence (POPs) in New York City (US) and São Paulo (Brazil). All conditions to this project financing have been fully satisfied; debt and equity funds have been drawn.

Seabras-1, owned jointly by Seaborn and global private markets investment manager Partners Group, uses next-generation coherent technology to deliver high-capacity and low latency telecommunications for one of the fastest-growing transoceanic routes in the world. This six-fiber pair system with initial maximum design capacity of 72Tbps is the first system to provide a direct point-to-point route between the commercial and financial centers of the United States and Brazil. Seabras-1 also includes branching units installed on certain of its fiber pairs that point towards Halifax (Canada), Ashburn (US), Miami (US), St. Croix (US), Fortaleza (Brazil), Rio de Janeiro (Brazil), and Las Toninas (Argentina).

Seaborn-managed Seabras-1 offers a wide range of capacity options (including lit, spectrum, and portions of fiber pairs) for POP-to-POP service on the New York to São Paulo route.

"We are extremely pleased to announce that Seabras-1 is fully funded and that manufacturing of this system is ongoing," said Larry Schwartz, Chairman & CEO of Seaborn Networks. "As global telecommunications demands continue to grow, we are determined to offer the most compelling range of alternatives for purchasers of international broadband capacity."

"Seabras-1 is a key telecommunications infrastructure project for the Americas and will bring tangible benefits to businesses and individuals in Brazil and neighboring countries," stated Todd Bright, Managing Director and Head of Americas Private Infrastructure at Partners Group.

Alcatel-Lucent Submarine Networks, now part of Nokia, is currently constructing Seabras-1 for Seaborn under a contract in force. Diverse, dark fiber backhaul and metro routes at each end of the system have been fully secured. Manufacturing of the Seabras-1 system is in progress, and the committed ready-for-service date is in the second quarter of 2017.