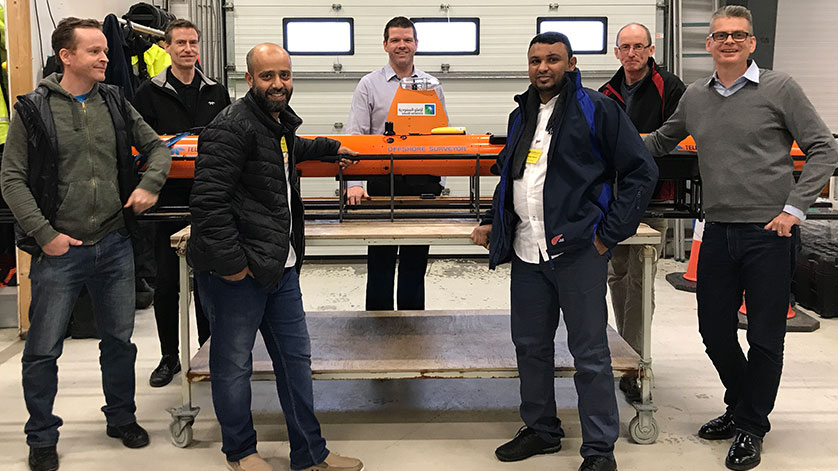 The Gavia system will be utilized predominantly for debris survey and pipeline inspection in the Arabian Gulf, with a potential service extension for other type of surveys in water depths up to 1000m in the Red Sea region.

The Gavia AUV system purchased by Saudi Aramco is equipped with an Interferometric side scan sonar (Klein Marine Systems, Salem, NH), camera, and utilizes a high accuracy Doppler Velocity Log (Teledyne RD Instruments, Poway, CA) aided Inertial Navigation System, (Rovins 154, iXBlue, Saint-German en Laye Cedex, France). For pipeline inspection applications, the vehicle will be equipped with field proven SeeByte Autotracker software (SeeByte, Edinburgh, Scotland), which provides autonomous pipeline inspection capability. In order to gather environmental data a variety of other sensors are carried in the new Gavia Science Bay module including the SeaOWL UV-A™ (Wetlabs, Philomath, OR) which is optimized for oil detection in water. In addition to the AUV, a small survey launch including all required peripheral components and a mobile launch and recovery solution is being provided by Teledyne Gavia.

The Gavia AUV was selected due to its modularity, offering future survey services expansion/diversity and increased sea endurance. It will increase the capability of the Company’s own survey services provider, Geomatics Services Division, in hydrographic data acquisition to support offshore engineering and drilling campaigns.

The Gavia AUV is an autonomous, modular sensor platform that is field configurable by means of a unique twist lock system. Operators can rapidly change or add sensors, navigation, or battery modules between missions, making the Gavia AUV a flexible and cost effective asset. The Gavia is a low logistics system designed to be operated from vessels of opportunity and has the greatest depth rating of any vehicle in its class. Since the initial sale of Gavia AUVs to the Oil and Gas sector in 2007, Gavia AUVs have been operated globally by service providers for a variety of commercial Oil and Gas surveys with proven industry accepted results.