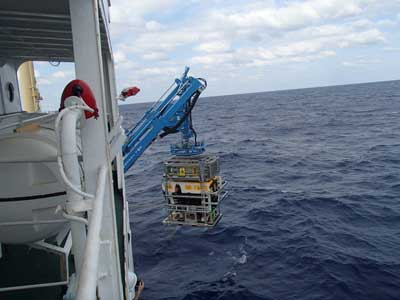 Marco Polo described Japan as the Island of Gold for its vast natural gold deposits, long since mined out.

But in the oceans offshore the seabed still holds a wealth of gold and other valuable mineral reserves created by hydrothermal activity from hot water venting at 300°C which contains dissolved metals that form ore deposits when cooled.

Seeing the potential for extracting these minerals, Tokyo University has engaged Kaiyo Engineering, a specialist marine science company, to undertake seabed research using two Saab Seaeye robotic systems, the Leopard and the Falcon, to explore the feasibility of mining the gold, cobalt and the copper-rich manganese crust.

The University’s program is a quest to establish world-leading exploration technologies that can be made available for commercial enterprise.

Alongside mineral exploration is research into protecting the ecosystems around extraction sites. The Leopard and the Falcon will be used to examine the biodiversity surrounding the hydrothermal vent activity in order that methods to protect the inter-connecting ecosystems at and above target sites can be developed.

It is only recent technological advances in underwater robotics systems, like the Leopard, that make these tasks possible, says the University.

Other tasks undertaken by Kaiyo Engineering will further exploit the advanced capabilities of the Leopard and Falcon.

One such task is to enhance the tsunami early warning seismographic monitoring system on the sea floor and install 45 kilometers of new sensors and transponders.

With 40 years’ experience in marine biological research, now to include mineral extraction evaluation, Kaiyo Engineering is the only private company in Japan using its own ships to undertake scientific tasks.

These ships first survey the oceans using sonar to identify hydrothermal vent activity and then send down the Leopard, supported by the Falcon, to survey, then film and gather samples.

Kaiyo chose the 3000 meter rated Leopard for the project because they say, its advanced technology offers “a lot of potential” for achieving the wide range of tasks to be undertaken now and in the future.

With its 11 thrusters and advanced iCON intelligent control architecture, the Leopard is the most powerful electric underwater robotic system of its size in the world.

It has the power and capability to undertake most work tasks, including such tasks as the removal and re-laying of the seismographic units, at a fraction of the cost of ownership of an equivalent hydraulic work vehicle.

The combination of thruster power and iCON intelligent control also means the Leopard can hold station whilst working in strong currents and undertaking precision tasks.

This control allows it to remain stable both in flight and on task whilst fitted with a range of large and heavy systems and tooling.

Kaiyo’s Leopard was fitted with an oversize skid, specially designed by Saab Seaeye engineers to accommodate the range of scientific equipment needed for the missions planned.

Other enhancements to the Leopard system included an extra tilt platform for an additional camera and extra fibre muxes and power supplies for multibeam systems.

Four Kongsberg cameras were fitted including a low light mono camera and a high definition HDTV camera with zoom. A Kongsberg multibeam sonar was also fitted, along with two Schilling Orion work class manipulators and an EdgeTech side scan sonar.

The supporting Falcon was chosen by Kaiyo because it is small and easily manhandled yet has five powerful thrusters and an intelligent systems architecture that can handle a wide range of large and sophisticated equipment – as well as being highly manoeuvrable, and like the Leopard can handle strong currents.

In addition to the standard camera fitted, the Falcon came with an extra Kongsberg color zoom camera along with an Imagenex multi frequency imaging sonar and a three-jaw single function manipulator with rope cutter.

The Falcon’s main roles are to monitor anchorage security, examine corals and monitor the metal hydrate activity. It will also be used for monitoring fish behaviour at eelgrass beds, which are an important habitat for nurturing fish stocks.

After completing this current project for evaluating the feasibility of extracting metals from around hydrothermal vents, Kaiyo is planning to undertake further sea bottom mapping and deploy sensors to establish the thickness of the of the cobalt-rich reef crust.