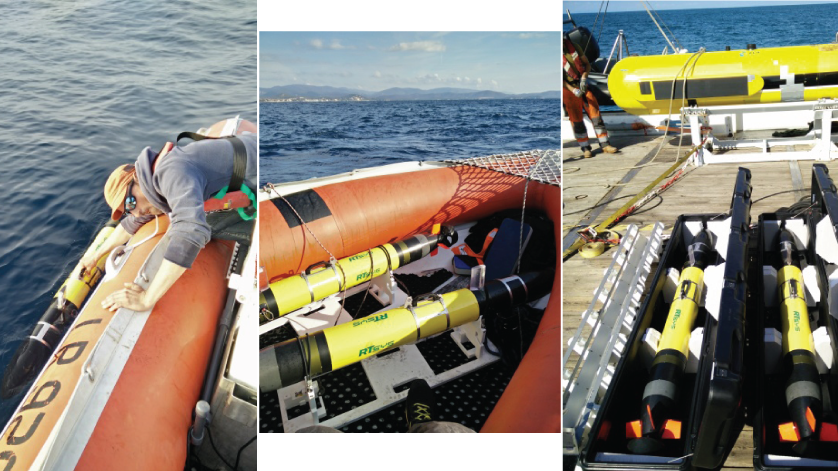 Between 20 and 23 November 2017, in the Hyères Bay near Toulon (The Var), RTsys and its partners Créocéan and ECA Group successfully tested the operation of a group of 3 drones intended to search for sulfide lenses within the framework of the MELODI project: 2 RTsys drones and one from the ECA Group. They are coordinated using an embedded electro-acoustic module developed by RTsys.

Given the very high economic stakes represented by the mining potential of the wide ocean depths, the states have structured the regulations, notably by AFIM (Autorité Internationale des Fonds Marins) and the national authorities having jurisdiction over their economic areas. Consequently, exploration permits have been mainly granted in 3 areas on the ridges of the Indian, Pacific and Atlantic oceans.

These lenses, very rich in metals, have been detected at depths between 800 and 4,000m, generally at around 2,000m. The areas concerned by metal prospecting are of gigantic size and concern hundreds of thousands of km2, whereas the areas considered exploitable are only a few hectares. To find them, it is therefore necessary to be efficient over very large areas and to be very accurate in much smaller areas, Currently, there is no method available allowing this mapping in an extensive manner.

The MELODI (Magnetic ELectromagnetic Ore DetectIon) project therefore uses 2 methods (MAGNETIC and ELECTROMAGNETIC) to be used by autonomous underwater drones to detect minerals in the form of sulfide lenses. It is performed by a consortium managed by CREOCEAN and including: CREOCEAN – ECA – RTSYS – NAVAL GROUP – MAPPEM.

The MELODI project is intended to create a demonstration project to detect and map magnetic anomalies by drones, such as deep ocean bed mineral resources, particularly sulfide lenses. It is based on the use of coordinated AUVs which can sweep large areas at low cost. The recent test phase in the Mediterranean Sea has proved the communications device developed by RTsys. It consists of a sealed chamber 320mm long by 120mm in diameter which is suitable for all models of carrying AUV, as long as it has navigation elements (position, etc.), a precise clock with PPS (Pulse Per Second) for synchronization, mission management software and swarm management algorithms (formation, positioning, etc.). Installed on the master drone supplied by the ECA Group, this device transmits its position to the two RTsys AUVs.

The swarm navigation allows these AUVs to accurately position themselves from up to 1.5 kilometers away, without the use of costly systems such as DVL (Doppler Velocity Log) or FOG (Fiber Optic Gyroscope). This configuration and the autonomy of the AUVs allows sweeping of up to 100 square kilometers in 24 hours!