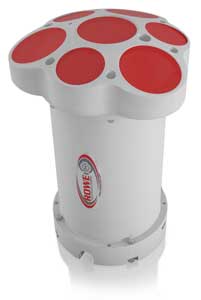 In 1770, Ben Franklin drew the first map of the Gulf Stream. In 1903, Scripps Institution of Oceanography was founded and Swedish inventor Vagn Ekman invented the mechanical flow meter for measuring ocean and river currents. In 1914, the first acoustic depth measurements were made. This technology remained unchanged until 1982 when the Acoustic Doppler Current Profiler was invented by Fran Rowe and Kent Dienes.

Constant improvements brought broadband measurements, multi modes, bottom track and commercialization of the technologies. Many uses for ADCP current measurements have been developed in the past 30+ years. Today, there are several manufacturers using the same technology invented in 1982 to make the same measurements.

In 2010, Fran Rowe founded RoweTech and leads the company that is developing the next generation of Doppler measurement tools with the same pioneering innovative goals he achieved in 1982. RoweTech has now designed a new ADCP that contains the features of RoweTech's dual frequency ADCP and their wave measurement ADCP SeaWAVE. Additionally, this new product named SeaSEVEN has all the features of RoweTech's standard ADCP's, which include:

Design details of the new SeaSEVEN ADCP are as follows: RoweTech's new product has two pairs of three beams splayed around the vertical beam. It has 60º azimuths between the beams and a 20º elevation, which allows the SeaSEVEN to make measurements never before available from a traditional three, four or five beam current profiler. SeaSEVEN is also able to make the basic measurements of Doppler shift, echo intensity, correlation, depth, and temperature at a high speed [10+ Hz] and store it on up to 64 GByte of memory. Researchers now have the ability to achieve applications which have been difficult or impossible with standard ADCPs.

RoweTech has launched the SeaSEVEN research-grade Doppler profiler and identified seven applications that are much easier to accomplish using this new ADCP.

• Waves: Wave measurements can be accomplished in coastal waters using the vertical beam for direct surface height measurements and with a pressure sensor, both sampled at 2 Hz.

• Renewable energy: Use as both a vessel-mounted, buoy-mounted, or bottom-mounted platform allows SeaSEVEN to be used as a site selection, resource measurement, environmental monitoring, or turbine wake characterization tool.