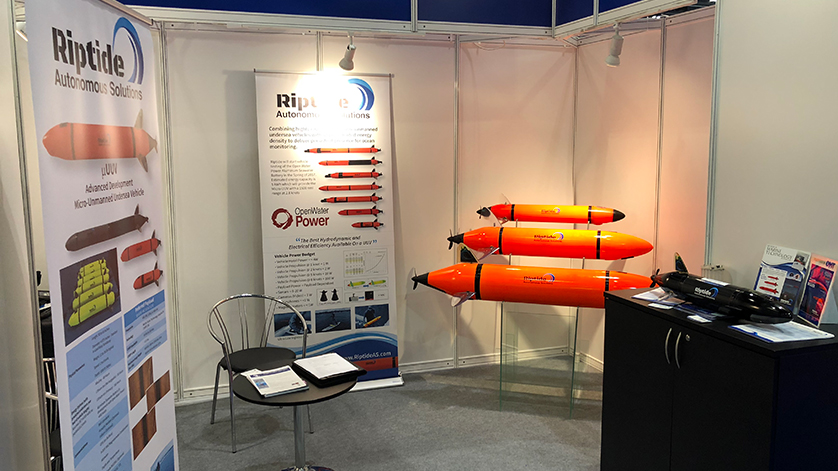 The new product has focused on performance and manufacturability improvements. Through a near-total redesign of internal electronics the new MKII µUUV offers a nearly 70% reduction in hotel load power to 3.5 Watts, thus extending vehicle endurance across the vehicle speed regime. New manufacturing approaches, including increased use of molded, rather than 3-D printed, parts allows for expanded depth ratings, faster production times and improved quality assurance.

John Vestri, Chief Operating Office of Riptide notes “the MK II µUUV is a significant step forward for Riptide. It advances our mission of Deeper, Faster, Further UUVs for our diverse customer base.” The user-friendly features of the Riptide family including payload versatility and open architecture remain significant benefits of the MK II design.

Riptide’s open source software has continued to expand with updated mission planning, vehicle checkout, and mission sortie execution tools. The MK II µUUV offers a 300m depth rating, speeds over 10 knots, and has an unparalleled endurance of 40+ hours at 2 knots without a payload on alkaline batteries. At base prices below $15,000 the MK II µUUV value proposition is unique in the market.

At Oceanology International the MKII µUUV received significant interest. “The µUUV really stood out for its high performance and affordable price, despite a growing number of lower-performing, higher cost, entries into the market” said Jeff Smith, CEO. “We are looking forward to upcoming milestones including the upcoming delivery of our 100th vehicle. Stay tuned.”

Riptide is now taking orders for the second generation MK II µUUV and has begun shipping the new MK IIs.

A New Generation of Trenching

Valeport introduces the next generation

A New Generation of Trenching

A New Generation in Trenching

Valeport Introduces the Next Generation