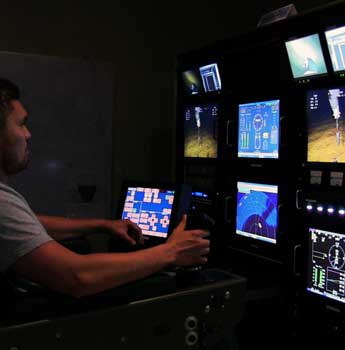 In October 2015, Oceaneering demonstrated two new technologies in the Gulf of Mexico that will greatly increase remotely operated vehicle (ROV) operational efficiency and reduce costs for its customers.

During the demonstration, the NEXXUS ROV on the Oceaneering Olympic Intervention IV vessel was successfully piloted via a satellite link from an Oceaneering onshore base. The innovative data/video communications technology that enables this capability was originally developed to aid in diagnosing faults offshore by technical support personnel onshore. The technology has now been further developed to include the ability to remotely pilot the ROV.

With remote piloting, an infield high bandwidth wireless or satellite link is used so that an ROV can be piloted on an offshore vessel from another remote location. Subject Matter Experts or other pilots can be linked-in in the event of highly complex processes or technical procedures that require special knowledge. Remote Connection Technology allows the use of multiple virtual connection technologies and potentially creates cost savings opportunities such as reduction and/or elimination of second shift crewing for low intensity operations.

The demonstration also included an essentially hands-free operation method of piloting, whereby the pilot was able to “fly” the ROV with a command-based system involving automated steps, instead of using the traditional joystick. Using Video Machine Vision Technology, the video processing software analyzes video and sends the ROV control system positioning data from the video to control the thrusters and move the ROV. Operators will now be able to use this technology to automate the ROV flight and perform tooling tasks faster and safer, thereby improving productivity and reducing the chance of downtime.

“Computer-aided piloting is much more efficient than a human pilot can achieve unaided, which in turn reduces the potential damage to tooling, manipulators, and most importantly, the customer’s subsea assets. This new ROV capability revolutionizes efficiency in the deployment of tools and navigation from point to point,” said Kevin Kerins, Senior Vice President, Remotely Operated Vehicles (ROV).

While both technologies were used at the same time during the demonstration, either technology can be used independently. However, pre-programmed automated step piloting eliminates latency problems associated with operating over a satellite link.