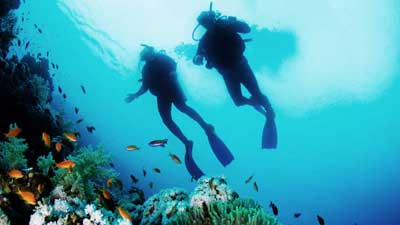 Swimming alongside a turtle, hovering with a squid or eyeballing a grouper are fairly commonplace experiences for millions of scuba divers. But switching to a rebreather unit rings even closer encounters with marine life.

All scuba divers remember their first time diving: the silence offered by the underwater world, with only the sounds of their breathing and the bubbles on their way to the surface. Nowadays even this scenario may be described as noisy. With the latest rebreather system there are no more bubbles to make a sound.

A rebreather apparatus, as the name implies, absorbs carbon dioxide from exhaled breaths to allow the user to “rebreathe” the unused oxygen content of the breath, while adding oxygen to replenish the portion that has been metabolized. No longer is air discharged into the water in the form of bubbles that drift up to the surface.

Because of this near silence, interaction with marine life is more intense, as the fish and other underwater creatures will approach the diver rather than move off. When there are bubbles, small fish retreat into the coral on each exhalation, while larger animals just swim away. With a rebreather system, the fish remain above the coral head and the lobsters stay out on the reef rather than disappearing into a hole. Furthermore, not only do rebreather divers experience the underwater world more intensely, they also get to enjoy it longer.

This is because a rebreather system allows divers either to stay down longer on one dive or do several consecutive dives without needing to refill their cylinders, since the gas is being continually recycled and thus is not consumed as rapidly as in traditional scuba diving.

Another contributing factor is that the no-decompression limit is far greater with a rebreather unit, translating into dives up to three times longer than is possible with a normal scuba system.

Poseidon has been developing and manufacturing diving equipment since 1958. Its latest model, the Poseidon Se7en, is a fully automatic rebreather unit, making it suitable for recreational divers as well as professionals. This means that certified scuba divers need only take an approved course to begin experiencing the underwater world with added tranquility. The Se7en uses hoses supplied by Trelleborg Industrial Solutions, which has been supplying Poseidon with hosing for its regulators and gauges for more than 40 years.

“It's simply a question of very high quality,” explains Georg Mammouch, Purchasing Manager at Poseidon. “We’ve tried alternatives in the past, but either we or the divers rejected the other hoses.” Poseidon and Trelleborg hit on a winning formula early on: Trelleborg developed a standard hose for all Poseidon products, and that hose has hardly been modified since the beginning. “And we aren’t planning any changes in the foreseeable future,” Mammouch says. “Everything’s been fine from the start.”

Tested on a daily basis under extreme conditions, Trelleborg’s regulator hoses have proven their worth around the world for four decades now. “You only have to think about the rapid temperature changes involved,” says Mammouch. “A hose may be lying in the Caribbean sun for hours. Then it’s plunged to a depth of 30 meters within minutes.”

Along with being able to withstand such climate changes, Poseidon demands that its hoses pass pressure and stress tests, meet official approval and conform to international standards. The U.S. Navy Seals, for example, use the company’s regulators, as does Ahmed Gabr, who holds the record for the deepest scuba dive, an astonishing 332.35 meters. Poseidon regulators are also the only regulators approved for ice diving. But that’s a story for another time.

In the past two years, Trelleborg has developed from being a hose supplier for Poseidon into a solution provider. Whereas the scuba equipment manufacturer used to carry out the assembly work at its own site, Trelleborg now delivers the complete hoses, including the couplings used by Poseidon. The advantage for Poseidon is fewer suppliers; for Trelleborg it enables more streamlined, cost-efficient production, as the hoses can be assembled in advance of demand and thus avoid any bottlenecks.

This article has been reproduced from T-Time, Trelleborg's magazine for customers and stakeholders.