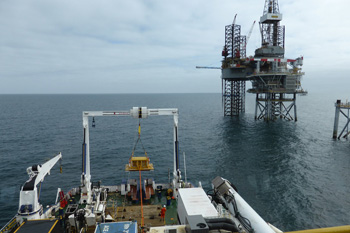 A case in point is the recent successful T&I (transportation and installation) of a Cable End Module (CEM) in the North Sea, which was not without its challenges. Here, Global Marine’s project engineering department was tasked with demands that included pre-planning, interfacing with project stakeholders, design engineering and precision installation.

When the contract from Tampnet, an expert in offshore high capacity communication networks, was awarded to Global Marine in October 2014, the initial concept design for the CEM was very different to what was finally deployed. Indeed, the early involvement of the company’s project engineering team in the design phase was a key part of this successful platform-to-platform fibre optic communications project.

The design changes requested by the project engineers were important to allow successful installation given the tight parameters set by the client. Essentially, the CEM had to be installed within a set distance of a pre-installed SSIV (subsea isolation valve) to allow jumper cables to be connected by divers at a later date. Additionally, the operation was to be performed in close proximity to surrounding structures, which added further complications to the offshore execution.

Interfacing with a multitude of stakeholders is always an important element in any project but particularly when different companies are responsible for design, fabrication, installation and hook-up. Throughout the design process, the project engineering team was involved in review meetings with all parties, including the field owner, and visited the fabrication yard to ensure the changes incorporated were satisfactory for the CEM T&I project.

The team was also able to offer its expertise to design the installation rigging, which allowed the methodology for subsea release to be developed by Global Marine. When engineering the rigging for subsea deployment, it is important to have a contingency for subsea release in the event that the primary system does not work. For this project, Global Marine engineered a primary, secondary and tertiary method for releasing the CEM rigging, with the primary method, using ROV hooks, successfully working as planned.

A further important aspect of installing subsea structures is positioning on the seabed. On the Tampnet project, tolerances of ±2.5m for position and ±2.5° for heading meant Global Marine used a Sonardyne Ranger 2 USBL (ultra-short baseline) acoustic positioning and tracking system (with transponders fixed to the structure), while EIVA Navipac template software was used to ensure precise placement.

Of course, contingency plans are also a pre-requisite when it comes to positioning subsea structures, and on this project the secondary method in place was a second USBL system, while a third strategy was the deployment of pre-installed sandbags to box-in the target area for landing the CEM.

The CEM was installed successfully in April 2015, achieving all of the necessary installation tolerances. Positioning this subsea structure accurately was a crucial part in the overall delivery of the project, and relied heavily on sound project engineering both in the planning phase and subsequently during marine operations. Indeed, the CEM deployment for Tampnet builds on Global Marine’s historical success in similar projects, such as the T&I of subsea nodes for scientific research at VENUS (Victoria Experimental Network Under the Sea), a unique subsea laboratory that provides live data to the ocean research community.

Global Marine was selected as the project contractor to lay the foundation for the laboratory off the coast of Vancouver Island, British Columbia, Canada. First, the company completed a desktop survey identifying the optimum location for node and sensor positioning, which was followed by system installation.

The first phase involved the deployment of 40km of cable and two node bases in offshore waters just north of Vancouver International Airport. At the ocean observatory site, the second phase was completed with the installation of nodes at three previously identified sites. The node in the Saanich Inlet is located 95m below the surface, while in the Strait of Georgia there are two nodes, one at 300m in the central strait and the second at 175m towards the Fraser River Delta.

Both the Tampnet and VENUS projects reinforce the industry perception that Global Marine is both reliable and flexible in its approach to complex projects, including those with extensive project engineering content. It should also be noted that safety was paramount throughout the entire T&I processes, with a complete commitment to QHSE playing a big part in the success of both projects.